A reader recently emailed me to ask how to mirror an Apple TV on a Mac. There are two main reasons you might want to do this: to capture screenshots or video for documentation, or so you can give a remote presentation that involves the Apple TV.

When I wrote the first edition of Take Control of Apple TV, I had to use an expensive and awkward Elgato capture box to take screenshots. Apple subsequently built this capability into QuickTime Player. With the Apple TV HD (also known as the fourth-generation Apple TV), you had to connect it to your Mac with a USB-C cable, but the Apple TV 4K lacks a USB-C port. Nowadays, all that’s necessary to capture the Apple TV’s output in QuickTime Player is that the Apple TV and the Mac be on the same Wi-Fi network.

When you choose a “camera,” you also have the option to choose a “microphone,” and any Apple TV you have will also show up in that section. However, I’ve never successfully routed audio from an Apple TV to my Mac. If you’ve had better luck, let me know in the comments.

Once you’ve run through those steps, the Apple TV’s interface is mirrored to the QuickTime Player window, making it easy to capture a screenshot or, if you’re doing a presentation, to share like any other window on the Mac.

Happily, because the Siri Remote works over Bluetooth, you can use it to control the Apple TV in the QuickTime Player window even if you’re in another room. You could also use the Apple TV controls in Control Center on your iPhone. 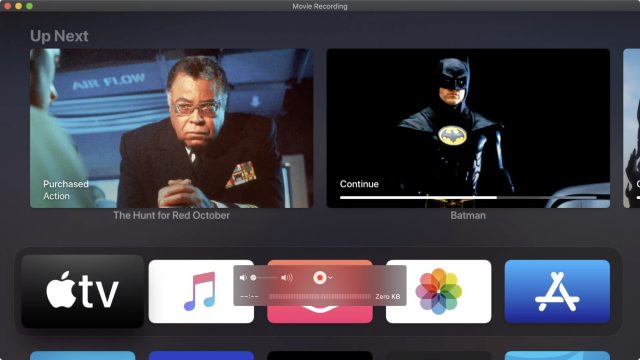 As you would expect, Apple won’t let you capture screenshots or video from movies or TV shows. Whenever you try to play a protected video in any app—Apple TV, Netflix, Amazon Prime, CBS All Access, etc.—QuickTime Player prevents such behavior by showing a black screen. (With purchased movies, you’ll get an HDCP error.) Navigate out of the video by pressing the Menu button, and you can once again use the Apple TV interface. Games and other non-video apps aren’t blocked in this way, nor is YouTube blocked.

However, QuickTime Player is a great way to capture screenshots and video of the Apple TV interface. You can use the standard macOS screenshot commands. To take a clean screenshot without the control bar or any Mac window trimmings in the shot, follow these steps:

If you’re helping someone learn how to use the Apple TV interface remotely or otherwise giving a presentation about it, you can share the QuickTime Player window just as you would any other Mac window using Skype, Zoom, or the like. Video won’t be smooth, but it will be more than sufficient to demo usage.

I discuss taking screenshots and many other tips in Take Control of Apple TV, which I recently overhauled to make it easier to follow and better fit Apple’s current TV strategy.