Whether at home or on the go, juggling multiple chargers for a MacBook, iPhone, iPad, and Apple Watch is a hassle. It’s better to have one charger for multiple devices. This often takes the form of a power bank—basically a large portable battery with ports for plugging in Apple gear. And if that power bank is also a wireless charging pad, so much the better!

I’ve been testing one such multi-device charger, Eggtronic’s new Power Bar, which supports all your Apple mobile gear. The white brick works as a power bank to charge a MacBook or iPad via a power cord. It doubles as a wireless Qi charging station with two spots for iPhones or Qi-ready AirPod battery cases. Finally, it provides a spot to charge an Apple Watch. 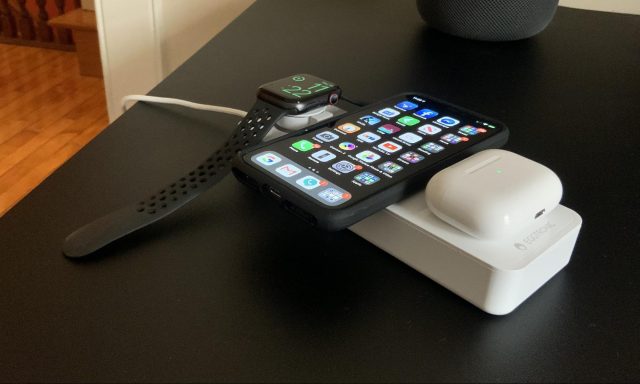 The Power Bar aims high but, at a steep $150, it falls a bit short with missing features and awkward aspects. I generally like it, though.

At one end, the Power Bar has an all-purpose USB-C port with 30W Power Delivery to charge your laptop or any other device, provided you have the right kind of cord. Included in the box is a USB-C to USB-C cable for charging a MacBook or recent iPad Pro, along with a USB-C to Lightning cable to charge an iPhone, iPod Touch, or older iPad. 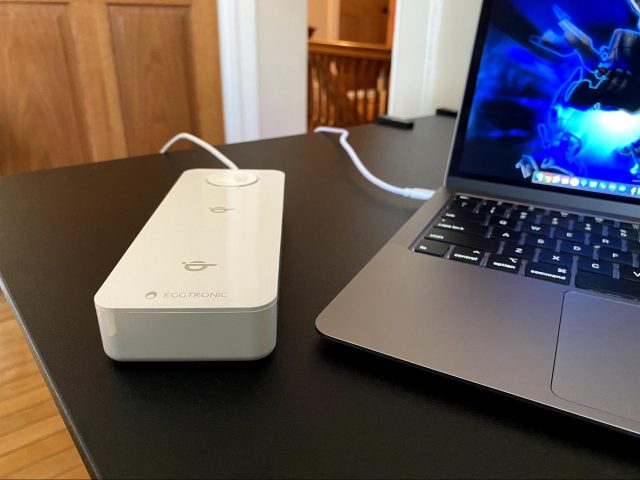 A row of three tiny blue lights to the left of the USB-C port indicates how much power the battery has left. There’s a power button just to the right of the port, but it does not appear to be required to initiate a wired charging session.

A single port is limiting, as is making it USB-C. Power banks typically have some combination of USB-C and USB-A ports.

The Power Bar itself charges pretty quickly, courtesy of Power Delivery tech, provided you’re using a hefty-enough adapter. Annoyingly, one is not bundled. Eggtronic apparently assumes you’ll use the adapter that came with your Apple gear—30W or higher is recommended—or get its own 30W charger for an added $29.99.

The Power Bar is far from the only power bank with integrated wireless charging capabilities, but despite minor oddities, it’s the best I’ve seen.

Two spots on top of the Power Bar for iPhone or AirPod-case charging are indicated with gray Qi logos that assist in device alignment. You do need to press the aforementioned power button to begin a wireless charging session—give it a quick tap instead of holding it down. Two tiny green lights alongside the blue battery lights blink when charging begins. 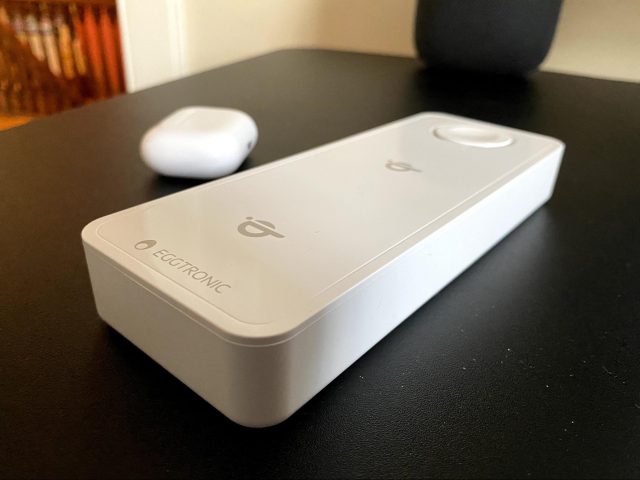 The two Qi pads work at 7.5W for the fastest possible wireless charging of an iPhone. Eggtronic documentation cautions, though, that “we do not guarantee the charging of two Pro models simultaneously,” in an apparent reference to iPhone 11 Pro phones.

Qi-charging capability means the Power Bar is not just a mobile product but also can be used for charging devices at home, like any other Qi pad. Just plug it into a wall outlet so you don’t run down its battery. Such a scenario precludes MacBook charging, though, in the absence of a second pass-through USB-C port.

The third spot on top of the Power Bar is reserved for a standard Apple Watch charging puck. Because some bands might physically obstruct the Apple Watch from achieving a solid magnetic link to the puck, Eggtronic provides a clunky workaround—you have to dig your fingernail under the edge of the puck to pry it upward. It snaps into that raised position to accommodate an Apple Watch with any band. (My Apple Watch Series 4 with a Nike Sports Band charged just fine with the puck in the lowered position.) 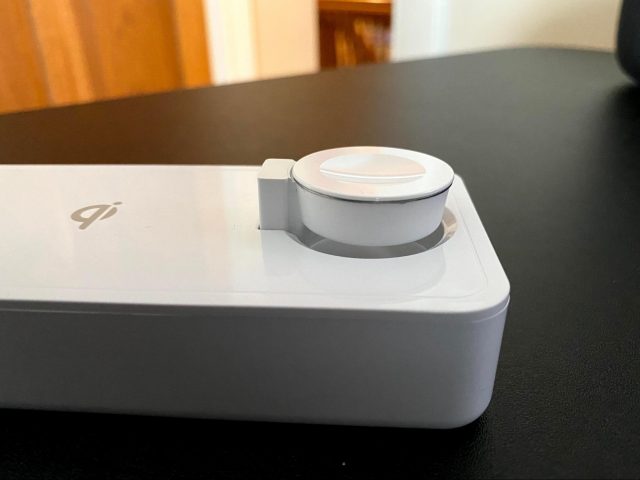 You may need to tap the power button to initiate a watch-charging session, if it does not happen automatically. I found the Power Bar’s behavior to be a bit inconsistent and confusing in this respect.

The Power Bar is something of a compromise product. Though it can give a MacBook or iPad Pro a battery boost, it is not powerful enough to be positioned as a full, notebook-grade power bank. Eggtronic’s Laptop Universal Power Bank is better suited for that task; it has extra ports, too, and costs only $89.90.

The Power Bar redeems itself with its capability to charge a variety of other Apple gadgets using both wired and wireless connections, making it a versatile companion for both home and travel usage, with partial laptop charging as a bonus, if you need it in a pinch.

I wish the Power Bar had a second USB-C or USB-A port, along with a push button to raise its Apple Watch charging puck, but I like the product enough to recommend it. It’s quirky and a bit pricey, but delivers solid functionality.

Comments About Eggtronic’s Power Bar Charges All Your Apple Devices