Apple has released macOS 10.15.5 Catalina, adding battery health management for recent Mac laptops, eliminating the bouncing tiles in Group FaceTime, providing controls for fine-tuning the color calibration of the Pro Display XDR, and fixing a variety of bugs. It’s a 2.98 GB download via Software Update; the combo update clocks in at 4.8 GB.

I always feel irrationally disappointed when batteries in my electronics start to show significantly reduced charge life. It makes scientific sense that batteries age chemically, but intuitively, it’s hard to accept that charging today doesn’t have the same effect as charging several years ago.

Apple designed macOS 10.15.5’s new battery health management capabilities to reduce the rate at which batteries chemically age. It works by monitoring your battery’s temperature history and charging patterns to adjust the maximum level to which it will charge the battery.

Unfortunately, prolonging the overall lifespan of the battery comes with a tradeoff—a reduction in the amount of time your Mac will run on battery before needing to be plugged in. Since you may—either generally or at specific times—wish to maximize runtime, you can disable battery health management in System Preferences > Energy Saver. Click the Battery Health button, deselect Battery Health Management, and click Turn Off when prompted. 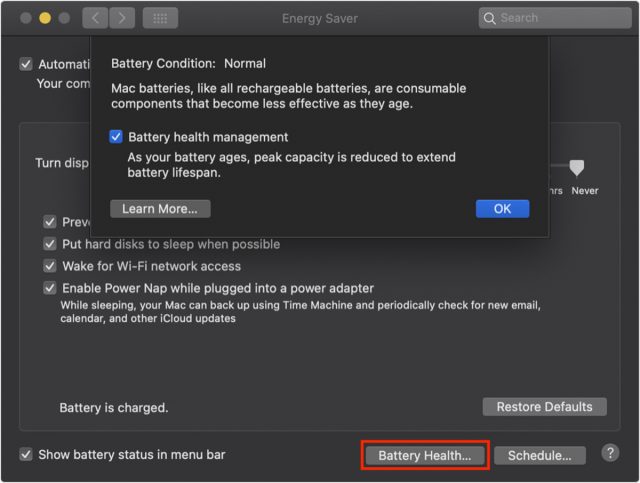 Finally, Apple notes that the limited maximum capacity may cause your battery status menu to indicate that you need to replace your battery.

The Battery Health button doesn’t appear in Energy Saver for my 2012 MacBook Air, which threw me initially but was explained by nbeadman on TidBITS Talk. He pointed out that, in a Six Colors post from 16 April 2020, Jason Snell noted that this feature was limited to Mac laptops with Thunderbolt 3 ports. That equates to all MacBook Pro models released since late 2016 and the Retina-capable MacBook Air models released since 2018. There’s no connection between Thunderbolt 3 and this feature—Apple is merely using the common denominator of Thunderbolt 3 support as a way of specifying which models are new enough to have the necessary internal hardware support.

The list of bugs fixed in 10.15.5 includes some that have been annoying. In particular, the update:

Sadly, no mention was made of the problems that some Mail users have had with data loss after upgrading to Catalina. We’ll have to wait for Michael Tsai’s users to weigh in with the results of their testing (scroll to the bottom of the comments).

And as expected, macOS 10.15.5 comes with fixes for 45 security vulnerabilities.

I wish I could change our general recommendations, but until we know more about the Mail bugs, I can’t. So, if you’re already running Catalina, either because you’ve upgraded or purchased a new Mac, let this update settle for a few days to see if it causes any troubles. It’s better to let others discover such problems and report back. Then install the update—the new features and bug fixes are all welcome.

We’re particularly intrigued to see how the battery health management feature works, but that’s going to be a long-term play. It will be difficult to assess how much it helps because no one outside Apple likely has a sufficient test suite of Macs to run for months.

Whether to upgrade from 10.14 Mojave (or earlier) is another question. We’re probably within one or two more bug fix updates for Catalina before Apple moves on to the next major version of macOS.

Assuming, that is, that Apple sticks to its usual schedule during these uncertain times and with engineers working from home. It’s conceivable that Apple could delay the next version of macOS for as much as a year. Alternatively, the company could move on to a newly named version to escape the somewhat cursed Catalina moniker but focus on cleaning up the problems in Catalina. (When it comes to new names, I’m voting for “Avalon,” which is the only city on Catalina Island and part of Arthurian legend.)

Regardless, if you haven’t yet upgraded to Catalina, my recommendation now is that you should wait until the end of June, after Apple’s Worldwide Developers Conference, which starts on 22 June 2020. The news that comes out of WWDC should provide some updated guidance.