Last year I got my first hearing devices. For some time, I had noticed that I turned up the TV much louder than my wife did, and I had problems following discussions with larger groups of people. After having my hearing tested, I got a prescription for two hearing devices, which I took to a hearing system specialist. I learned that besides normal hearing aids, there are “Made for iPhone” (MFi) hearing devices that are directly recognized and controlled by iOS. An Apple support document lists manufacturers and products that have earned the MFi label. Of course, as an Apple user, I had to get an MFi pair. After trying several different devices, I finally settled for a pair of Pure 312 3Nx by Signia. In this article, I describe my experience in setting up and using these devices.

A couple of things before I start:

Introducing Your Hearing Devices to Your iPhone

You connect MFi hearing aids with your iPhone in Settings > Accessibility > Hearing > Hearing Devices. Obviously, there is a Bluetooth pairing going on here. But hearing devices don’t have a button that puts them into pairing mode; instead, you have to open and close the battery case on each device to restart them. (You pair non-MFi hearing aids in Settings > Bluetooth like any other Bluetooth-enabled devices.)

If all goes well, iOS recognizes your hearing aids and gives them a name. You see the name of my device in the next screenshot. “Hörsystem” means “Hearing Device”; I don’t know why iOS inserted an ellipsis in place of my last name, and no, I couldn’t find any way to change this name.

Next, you’ll have to agree to a standard Bluetooth pairing request.

The status of your device then changes to Connected, and tapping it opens a new page containing controls for your device, most of which need no explanation. 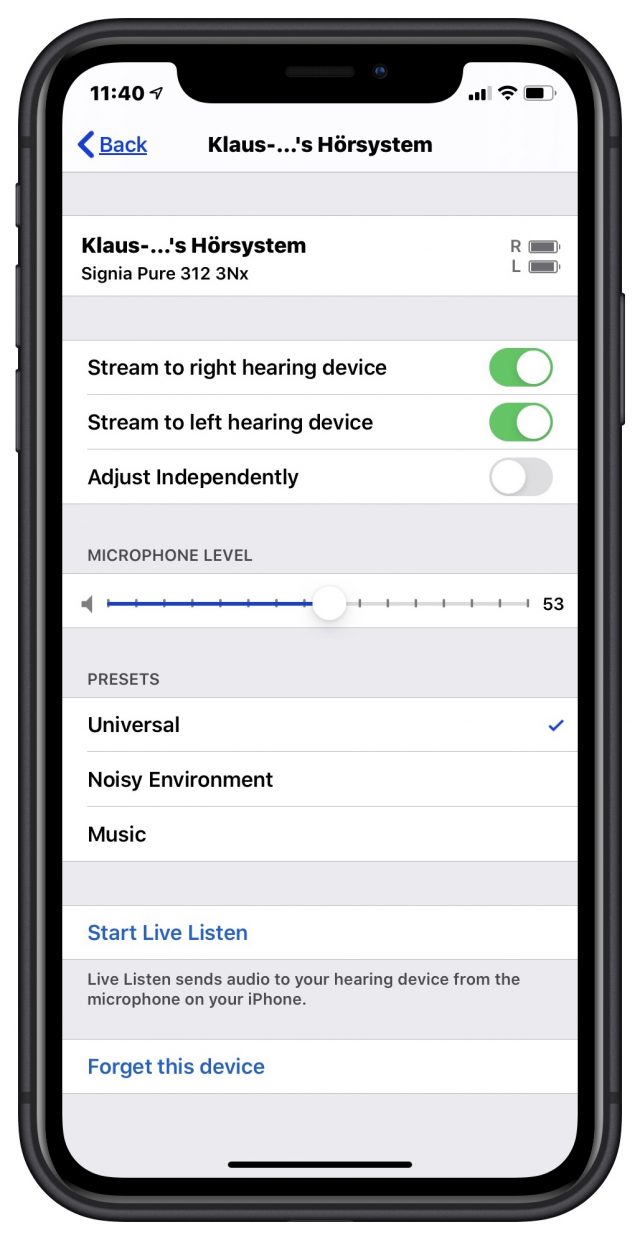 Listed under the Presets heading are the programs for different hearing situations that are present in your hearing device. (The hearing specialist configured and downloaded these to my hearing aids, and when I was annoyed by wind noises while riding my bike, she updated the programs accordingly. Work with your hearing specialist to create and modify these.) You can switch between them by tapping one. Most of the time, I use the Universal preset. The Noisy Environment preset works well for restaurant visits or meetings with larger groups of friends or colleagues. I hardly ever use the Music preset; I prefer earphones for listening to music.

Below the presets is Start Live Listen. This iOS feature, which also works with AirPods, uses the microphone on your iPhone to send audio to your hearing aids, which could be helpful in certain environments where your iPhone can be placed closer to the source of sound than your hearing aids’ microphones. That’s the theory anyway—I don’t notice any change at all when I enable it.

If you want to start over, just tap Forget This Device at the bottom.

Most manufacturers have their own iOS (and Android) apps that duplicate some of the above controls and add more functions. Since these apps are manufacturer-specific, I’m not covering them here.

Next, let’s look at how you perform some common tasks that involve your hearing aids.

When you make or receive phone calls, the iPhone automatically sends the incoming voice to your hearing aids. In most cases, this is what you want. If you want to route the audio to your iPhone’s speaker, a HomePod, or somewhere else, you can tap the Audio button in the call controls to bring up a sheet listing the available destinations.

Music you play is treated in a similar fashion. By default, the iPhone sends it to your hearing aids, but you can choose to send it to another destination. However, this time it is not an Audio button that shows up but an AirPlay

button located at the bottom of the music player.

Strictly speaking, the only AirPlay destination in this sheet is Wohnzimmer, which is our AirPlay-capable living room stereo (Wohnzimmer = living room). But it surely makes sense to group all audio outputs in one place regardless of the protocol used to reach each one.

In the car, my wife and I often use Apple Maps to guide us. (Our car is too old to provide CarPlay or even built-in GPS navigation; its tech tops out at a cassette player.) The first time we started navigation when I was wearing my new hearing devices, my wife noticed instantly that she didn’t hear any directions. As you might guess, the iPhone sends audio from Maps to the hearing aids by default.

Looking at the iPhone screen, we did not see a way to reroute the spoken directions to the iPhone speaker, since it’s helpful for the passenger to be able to hear the spoken directions too. It would be even more of a problem if my wife was driving but only I was hearing the directions. Being somewhat in a hurry at the time, however, we left it at that. Later I looked at the Apple Maps interface again, but I still couldn’t figure out how to route the audio. On my next visit to the hearing system specialist, I asked the friendly people there, but they didn’t know either. A Google search finally gave me the answer. Would you have known?

You can pull up the sheet from the bottom of the navigation screen to reveal more buttons. One of them is an Audio button that, when tapped, brings up a sheet where you can switch the voice output to the iPhone speaker.

This, in my opinion, is a bad case of hidden functions. How is the average user who doesn’t read manuals to know that he can pull this sheet up? At the very least, a hint that there is a hidden part should be present in the visible part of the sheet, perhaps a small arrow.

Another awkward situation arose when I went to the biweekly rehearsal of my small choir wearing my new hearing devices. We wanted to record one song we had rehearsed to play it back immediately as a way of checking our progress. I recorded the song with the Voice Memos app and started to play it. I heard the song, but my colleagues just looked at me expectantly. You recognize the pattern: the song played back to my hearing devices, not to the iPhone speaker. I looked at the Voice Memos interface to switch the audio output.

This time, there is no way to control where the audio is played—no Audio button, no AirPlay button, no sheet you can pull up to reveal hidden controls. The Ellipsis button presents a sheet that contains many useful functions but no way to change the audio destination. In the end, I emailed the song file to my colleagues after the end of the rehearsal. Only much later did I figure out several ways to send a voice memo to the iPhone speaker or another destination—read on!

It’s obvious by now that the default behavior of the iOS hearing aid integration is to send all audio to your hearing devices. There should be a way to change this, and there is. 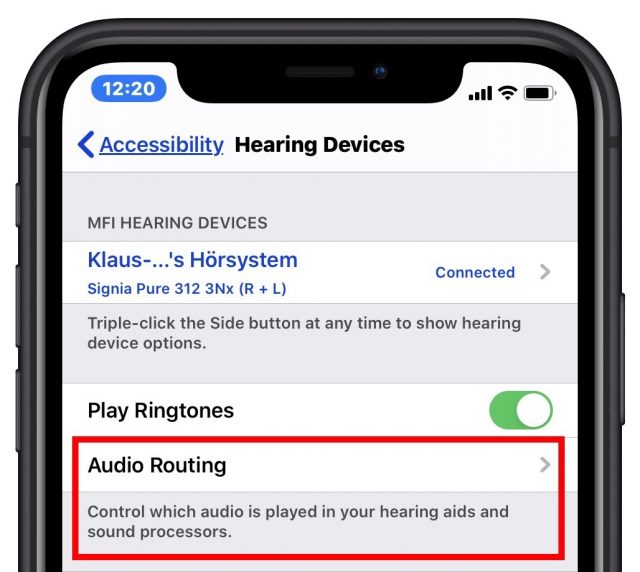 Back in Settings > Accessibility > Hearing > Hearing Devices, the screen where you connected your hearing aids contains more controls, one of which is labeled Audio Routing.

Well, that’s helpful. If you know what Automatic does, please leave a comment.

Shortcuts (and a Second Solution for Voice Memos)

There are a couple of shortcuts that help with common hearing aid functions. Control Center contains two relevant controls. The Audio “card” (as Apple calls it) in the upper right contains an AirPlay button that gives access to all available audio destinations, exactly like the AirPlay button in the music player.

Tapping the AirPlay button in the Audio card presents a second solution to the Voice Memos problem above—it displays a list of possible audio destinations. Like the first solution, this change of audio output is permanent; if you want to switch back to your hearing aids, you’ll have to do so manually. 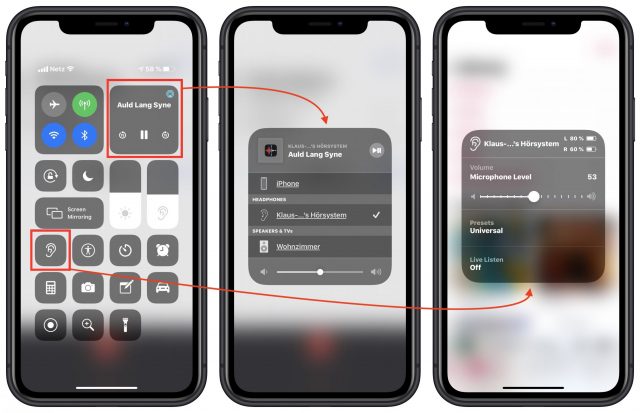 Then there is the Hearing control (the one with the ear icon above). If you don’t see it in Control Center, you’ll have to activate it in Settings > Control Center > Customize Controls. It gives you access to some important functions like volume, presets, and Live Listen.

Finally, iOS provides one additional shortcut that helps you keep track of the battery level in your hearing aids. On the iPhone’s Lock or Home screen, swiping from left to right reveals a configurable set of widgets. The Batteries widget shows not just the battery levels of your iPhone, Apple Watch, or AirPods, but also those of your hearing aids. If it doesn’t appear, scroll to the bottom and tap Edit to activate it, much like adding the Hearing controls to Control Center.

Using Your Hearing Aids with More Than One Apple Device

Connecting hearing aids to multiple devices seems to be tricky and troublesome according to some comments in TidBITS Talk. Generally speaking, if you want to pair your hearing aids with another Bluetooth device, you have to put both devices into pairing mode; since the hearing aids lack a button for that, you have to take them out, open and close the battery cases to restart them, and then put them back in. It’s fussy and not particularly comfortable.

However, if we restrict the discussion to Apple devices, we find a relevant Apple support document that’s surprisingly clear:

Changes you make to hearing device settings on one device are automatically sent to your other devices. 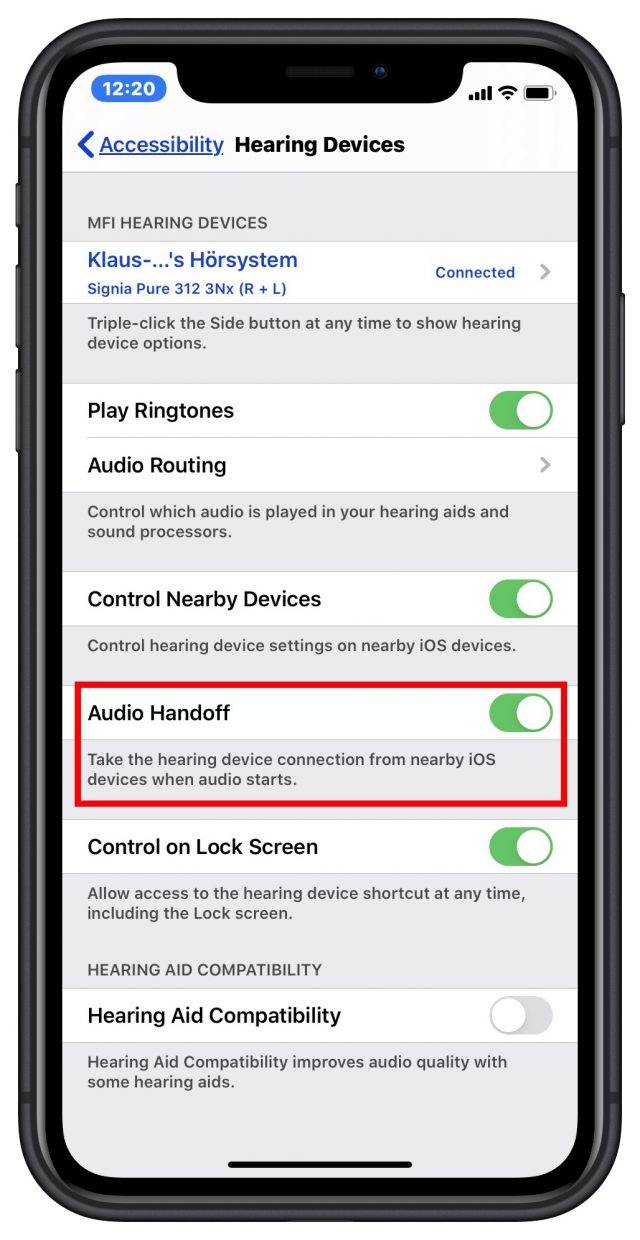 Furthermore, Audio Handoff must be on; enable it in Settings > Accessibility > Hearing > Hearing Devices.

I tested this with my iPhone and iPad; the results were mixed.

The goal of automatically distributing the hearing aid settings to all participating Apple devices is a good one and seems to work. However, the switch from one audio-generating device to a second one sometimes works for me and sometimes doesn’t. But my tests were far from exhaustive. Your comments are welcome!

Overall, I’m quite content with how Apple integrates support for hearing aids into iOS. Setup is straightforward, and the way all audio is sent to the hearing aids makes sense in most cases.

There are a few situations where it doesn’t, and although Apple could do a better job of making the interface more discoverable, there are ways of redirecting audio from the hearing aids to other audio destinations. A uniform symbol (like the AirPlay button) that leads to a consistently laid-out screen would be helpful, as would a Siri command to “Play audio on my hearing aids.” Only a few apps, like Voice Memos, fail to provide any in-app way of redirecting audio—we can hope Apple will address this in an update.

Although Apple has put some effort into making one set of hearing aids work with multiple iOS devices, the automatic switching works well only with phone calls. With music and other audio, the switching is haphazard at best, and there’s plenty of room for improvement there.

Klaus Wirtz is a TidBITS reader since the 1990s. He was a member of the German TidBITS translation team from 2003 to 2006. Lately, he has become a bit hard of hearing.