As protests surrounding the killing of George Floyd continue around the world, Apple last week joined the music industry in a “Blackout Tuesday” in support of Black voices and Black communities. All of Apple Music’s screens—For You, Browse, and Radio in the Music app—displayed just Apple’s statement and a single Listen Together button that played the Beats 1 radio station. It was a powerful and appropriate statement, and one that I hope we can all get behind. 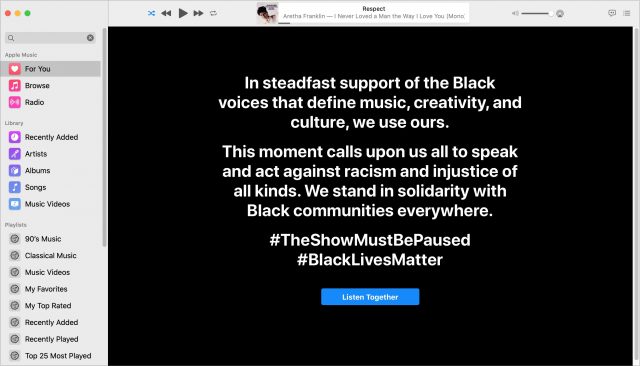 You could still play music from Apple Music that you added to your library, and you could still search for and play artists, albums, and songs in Apple Music. Personally, I spent that afternoon listening to Aretha Franklin.

Apple has also collected a number of movies and documentaries in a Confronting Systemic Racism section in Apple TV—scroll down in Watch Now. (Amazon Prime has done something similar as well.) 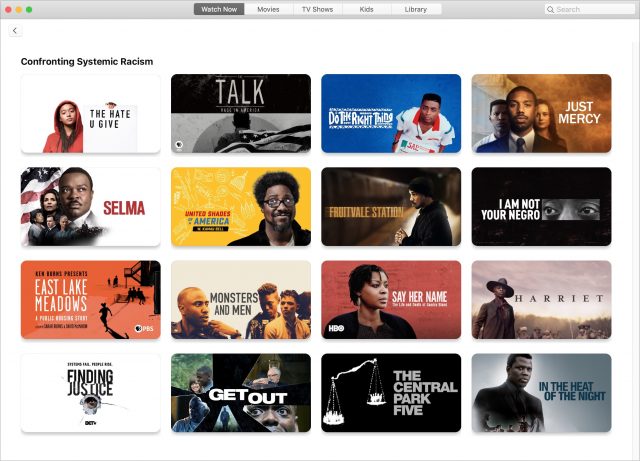 Later in the week, Tim Cook penned an open letter, “Speaking up on racism,” in which he acknowledges that we’re still living in a world underpinned by an “everyday experience of deeply rooted discrimination” and suggests:

To create change, we have to reexamine our own views and actions in light of a pain that is deeply felt but too often ignored. Issues of human dignity will not abide standing on the sidelines. To the Black community — we see you. You matter and your lives matter.

As much as these expressions of support are absolutely welcome, Apple, like many tech companies, has had trouble implementing its commitment to diversity in its US workforce, particularly in leadership roles. The company releases a regular report on its Inclusion & Diversity page detailing its progress in hiring what it calls “underrepresented minorities”—look at the interactive chart at the bottom of the page for the numbers. Apple will undoubtedly be updating the page with figures from 2019 soon, and we’ll cover it more thoroughly then.

Comments About Apple Statements and Actions on #BlackLivesMatter