During the WWDC keynote, Apple unveiled a spate of substantive (if not groundbreaking) updates for watchOS 7 that include long-anticipated upgrades (sleep tracking, better watch-face customization), other helpful features (bike directions, Siri language translation) and a couple of surprises (“dance” workouts and handwashing detection suitable for the coronavirus age).

watchOS 7’s focus, not surprisingly, was on fitness and wellness, which has been Apple’s emphasis for the Apple Watch for a while. Appropriately, Apple filmed the watchOS portion of the keynote in the company’s snazzy fitness center.

Apple Watch fans have long groused that watch face customization is limited and didn’t allow for faces designed from scratch by third parties. watchOS 7 still does not permit third-party faces, but it has otherwise loosened up considerably in the face department.

For instance, more than one complication from a particular watch app can now appear on a single face. Apple gave examples: a Glow Baby face can display multiple complications that help new parents track bottle feeding, breastfeeding, pumping statistics, and nap times, while Dawn Patrol can give surfers tide, wind speed, and water temperature data from a surf spot.

You can now share customizations, too, through all the usual methods. If those receiving a face recommendation don’t have all the relevant apps, they’re prompted to download them. 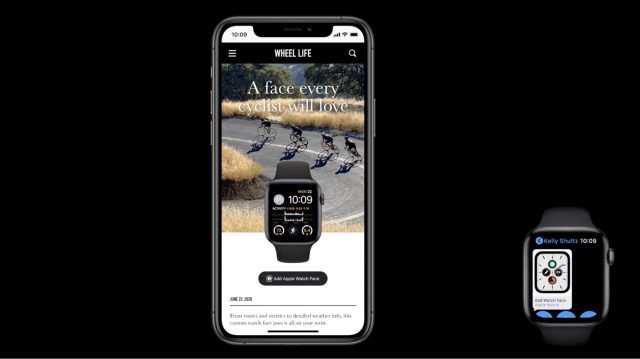 Apple has streamlined its face builder and made it more attractive, while unveiling a few faces of its own. These include a Photo face that now incorporates color filters; an X-Large face with an option to add a single, prominent rich complication; and a Chronograph Pro face with a tachymeter to gauge speed based on time traveled over a fixed distance. 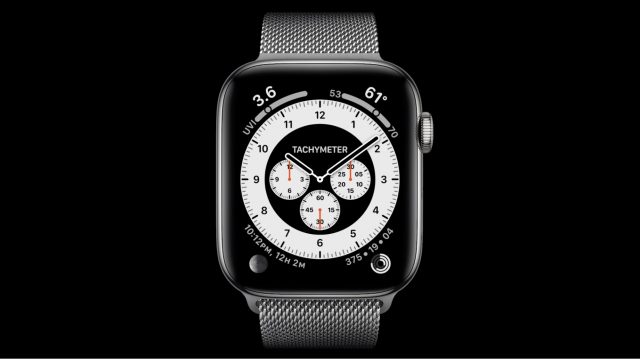 Sleep tracking has seemed like a no-brainer for years, given the variety of third-party sleep-tracking apps, and had (incorrectly) been anticipated for watchOS 6. Apple says this is its most-requested feature. Well, it’s finally here.

Sleep tracking involves detection of “micro-movements” via the Apple Watch’s accelerometer, allowing analysis of respiration. As a result, the Apple Watch knows when and how much you sleep each night. In the morning, it presents a visualization of the previous night, including periods of wake and sleep. Additionally, a chart shows your weekly sleep trends. 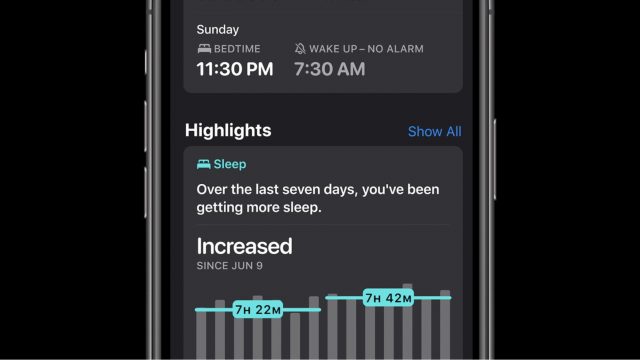 The Apple Watch preps you for a good night’s sleep, as well. A customizable Wind Down routine, configured on your iPhone, can include a relaxing Home app scene, a soothing soundscape, and a dive into a preferred meditation app while turning on Do Not Disturb. Once you’ve dozed off, the Apple Watch goes into Sleep Mode, darkening its screen and showing only a dim time display if you tap it.

When it’s wakeup time, the Apple Watch can trigger either a silent haptic alarm or gentle sounds while displaying a wakeup screen with the battery level (since, in many cases, it will need a prompt recharge). If your Apple Watch doesn’t have enough power for the night, it will prompt you for a quick pre-bedtime charging session. 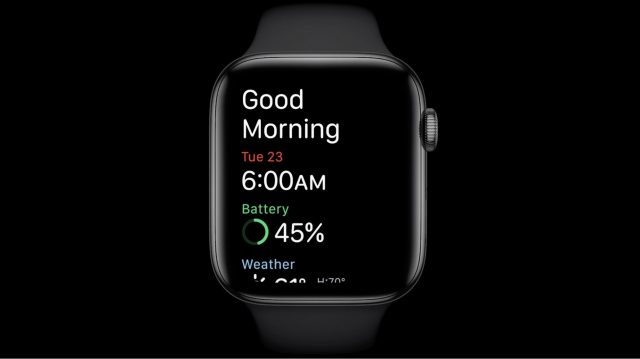 In a nod to privacy, Apple says sleep data is encrypted on the device or in iCloud with iCloud sync and is always in the user’s control. Wouldn’t want the monsters under the bed to know you’re faking it.

The Workout app is one of the most popular Apple Watch apps, so Apple continually lavishes attention on it. This year is no exception, bringing four new workout modes: Core Training, Dance, Functional Strength Training, and Cooldown.

Perhaps the most interesting of these, Dance, lets users engage in Bollywood, cardio dance, hip-hop, or Latin sessions that the watch tracks with the heart-rate sensor, accelerometer, and gyroscope to detect arm and lower-body motions unique to the various dance forms. Everyone mambo! 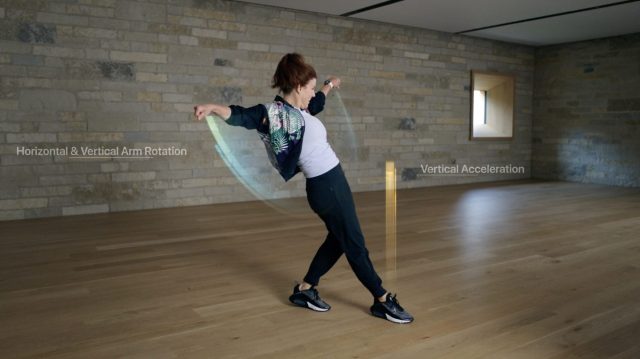 Apple also has done some work on the Activity app (the one showing these three concentric activity circles), which is now called Fitness. It serves a streamlined fitness data dashboard that shows daily activity, workouts, awards, and activity trends in one tab. Another tab displays communal exertion, including activity sharing and competitions.

The Health app got some love, too, though in a way mostly relevant to medical professionals. New Mobility Metrics include low-range cardio fitness, walking speed, stair-descent speed, stair-ascent speed, six-minute walk distance, double support time, step length, and asymmetry. Typically only tracked in a lab setting, these metrics can be uniquely measured by Apple Watch and iPhone, and used in the development of medical apps. Alas, there was no mention of blood oxygen level detection, which could be of use in detecting COVID-19 infections, but which reportedly is waiting on FDA approval (see “Wearables Like the Apple Watch Show Promise in Detecting COVID-19 Infections,” 3 June 2020).

We’ve long known that vigorous hand washing lasting at least 20 seconds can eliminate disease-causing bacteria and viruses. This is all the more important during the COVID-19 pandemic—and the Apple Watch is here to help.

In what Apple describes as “a first-of-its-kind innovation for a wearable,” watchOS 7 harnesses the Apple Watch’s motion sensors and microphone along with on-device machine learning to detect the telltale signs of a handwashing session. A 20-second countdown timer starts, with haptics and sound, and if the user stops too soon, the Apple Watch issues a prompt to continue. 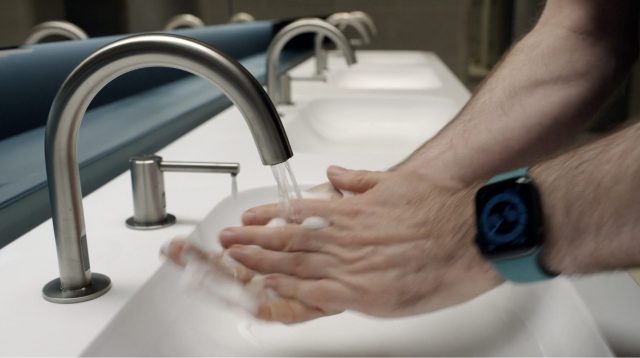 Also, you can configure watchOS 7 to remind you that a handwashing session is advisable upon arriving home.

Over on the iPhone, the Health app shows the frequency and duration of your handwashing sessions, as well as information on the importance of handwashing as it relates to overall health. Sounds used to detect handwashing are not automatically recorded or saved by the Health app or Apple Watch, so you don’t have to worry about anyone hearing your little handwashing songs.

watchOS 7 builds on this trend with a feature called “headphone audio notifications.” It can tell you how loudly you are listening to music and podcasts through headphones, and when such levels could potentially cause harm. When total listening has reached 100% of the safe weekly listening amount, the Apple Watch alerts you.

This feature is also accessible on an iPhone or iPod touch. You can consult the Health app to see how long you have been exposed to high decibel levels each week. Again, Apple is clear that no audio is recorded or saved by the Apple Watch or Health app.

As an offshoot of a Maps upgrade on other Apple devices, watchOS 7 lets you plan and execute bike rides with large, easy-to-read prompts. You’re told when to dismount and walk bikes, where to find stairs to save time, what routes skirt hills, where to find bike shops, and how to reach a destination the most quickly or by the most direct route.

As an avid cyclist, I’m pretty excited about this feature. The hard part of using the Apple Watch while riding is seeing and interacting with the screen, so I’m curious to see how well Apple has addressed those issues. It might be a while before I can use bike directions in Minneapolis-St. Paul, though, since my metro area isn’t on the short list of those getting the capability initially.

The Universal Communicator of Star Trek fame remains a sci-fi pipe dream, but with watchOS 7, the Apple Watch inches a bit closer. Now you can get spoken translations from Siri in a number of languages by raising your wrist and asking, for instance, “How do you say hello in Japanese?” The assistant provides a tap-to-play translation, and also shows it as text.

Once Apple got past the teething pains of the first few versions of watchOS, the company has concentrated on refining the capabilities made possible by the Apple Watch’s sensors and proximity to your body. watchOS 7 continues that trend with a collection of features that, while not groundbreaking, make an Apple Watch an ever more welcome life accessory.