During a typical Minnesota bicycling season starting in about early April, I would have by now logged roughly 1000 outdoor miles—many of these in group outings that, last year, took me and my cycling buddies all over the state.

But 2020 has hardly been typical. Though outdoor cycling is not out of the question during the COVID-19 pandemic, longer rides are logistically difficult to pull off, and group rides are best avoided because of the concern that bunched-together cyclists might infect each other.

To salvage at least some of my riding season, therefore, I had to find another way to pile on the miles while traveling to cool new places.

Enter Zwift, which is a sort of video game for cyclists—but one that involves real physical exertion rather than just hyperactive thumbs.

With Zwift, you hop on an indoor, stationary bicycle and begin pedaling while watching a TV, tablet, or computer that displays a virtual version of you in places like London or New York City. As you crank the pedals, your digital counterpart careens along digital roadways with eye-popping simulated scenery all around. 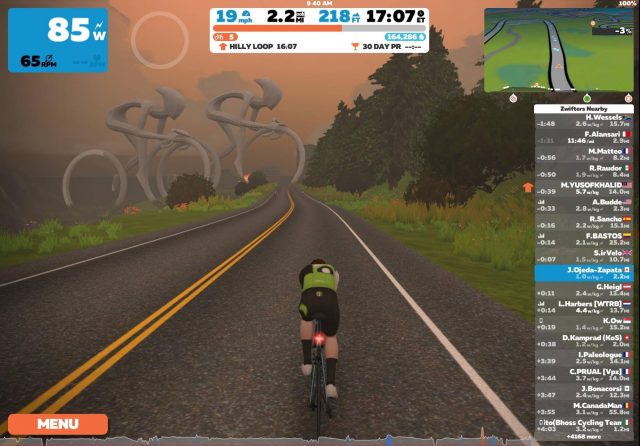 Stationary cycling can feel deathly dull compared to outdoor riding, but Zwift adds a fun factor. You never know what you’ll see. At one point, on a ride in Zwift’s fanciful, fictional realm of Watopia, a Tyrannosaurus Rex lumbered across my path.

Best of all, Zwift is a shared experience. Multiple users can converge in this cycling Matrix while physically staying home. This is how I’ve recently ridden with my bikin’ bestie Chris, with whom I’ve logged thousands of real miles and now join for cyberspace excursions. He and I have been on a number of large group Zwift rides—no masks required.

Runners can get in on the Zwift action, too. More on that in a bit.

For Zwift to work as a real-life training tool rather than like a videogame, the physical pedaling on a stationary bike must instantly and accurately translate into virtual pedaling on the screen.

Put another way, data such as speed, cadence (pedaling rate), and heart rate must flow from you to your onscreen avatar. Sensors on the bike measure the data and wirelessly transmit it to the device running the Zwift app so the virtual cyclist can respond accordingly.

Here is where things can get complicated in a hurry with a vast ecosystem of sensing gear and wireless protocols that can be migraine-inducing for a Zwift newbie to sort out. I am a relative newcomer to this and have craved acetaminophen on occasion.

Zwift is nothing if not nerdy.

To make things simpler for me (and you), I focused on scenarios involving my Apple hardware, Bluetooth wireless connectivity, and the physical add-ons required to exploit Zwift properly. Zwift’s app runs on the Mac, iPhone, iPad, and Apple TV, and it also supports Windows PCs and Android gadgetry.

A Zwift setup needn’t be expensive. You will likely be pressing into service a bike you already own, for one thing. Add-on gear doesn’t cost a fortune, either. Here are the pieces for an affordable setup.

Since you’re biking in place, you’ll need a trainer, a metal stand that elevates the back end of your bike while placing its rear wheel on a hefty metal roller. As you pedal, the roller creates resistance to simulate the effort required to pedal the bike down a road or trail.

Basic trainers can cost between $50 and $150 if you are buying new. It’s likely that you could find one for less, or even free if you poke around on Craigslist or Nextdoor. I grabbed one that a neighbor was discarding.

Retrofitting your bike to transmit speed, cadence, and heart-rate data wirelessly isn’t expensive, either. The fitness tech firm Wahoo offers a sensor bundle with speed and cadence modules for $69.99. The tiny speed sensor attaches to the bike’s rear-wheel hub, and the cadence sensor goes on a pedal crank. 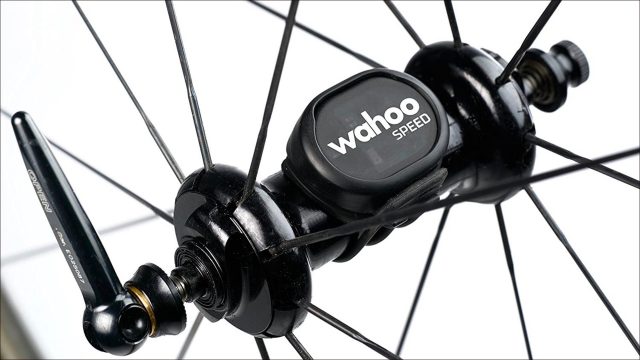 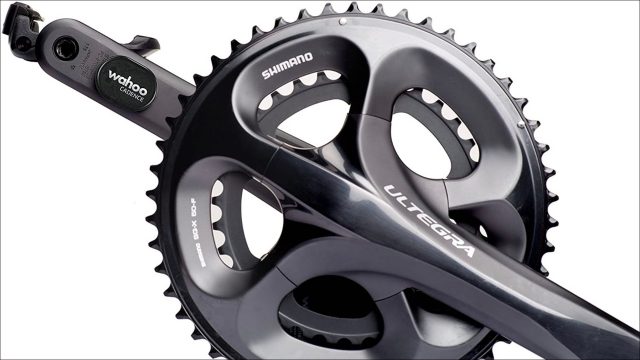 Wahoo also offers a variety of Tickr heart sensors that you can use on your chest or wrist. I used the wrist-style Tickr Fit, which costs $79.99. Chris prefers the Tickr chest strap, which costs $49.99. 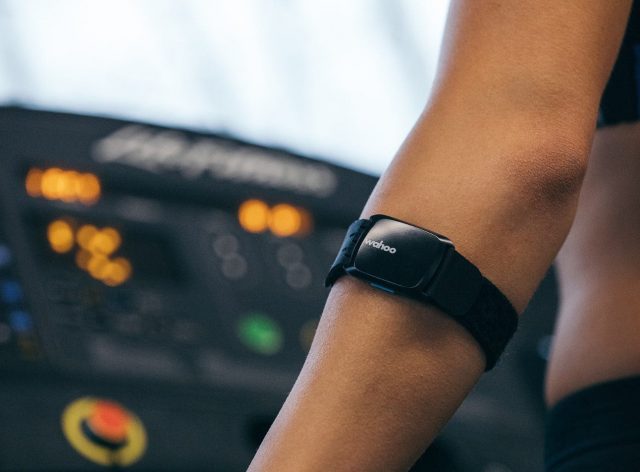 You can also use an Apple Watch as a heart-rate sensor for Zwift rides, but I had trouble getting it to work correctly with some of my Apple hardware. It seemed to work only on the Apple TV, oddly. That may be because Zwift’s support for the Apple Watch is still in beta as of June 2020 and is generally finicky.

Zwift is pointless if you can’t see where you’re going. When I got serious about Zwift this year, I popped over to Walmart and bought a Samsung TV that I set up with my Apple TV and positioned in front of my stationary bike. Any flat-panel TV you have lying around should do fine since Zwift is gracefully backward-compatible with older televisions; I tried the service on an old 720p set, and it worked well.

If you’re running Zwift on a MacBook or an iPad, you have to figure out a way to position it within view and easy reach while you’re on the bike. An indoor “cycling desk” such as Wahoo’s $249 Kickr model is perfect for this purpose, though a bit pricey. 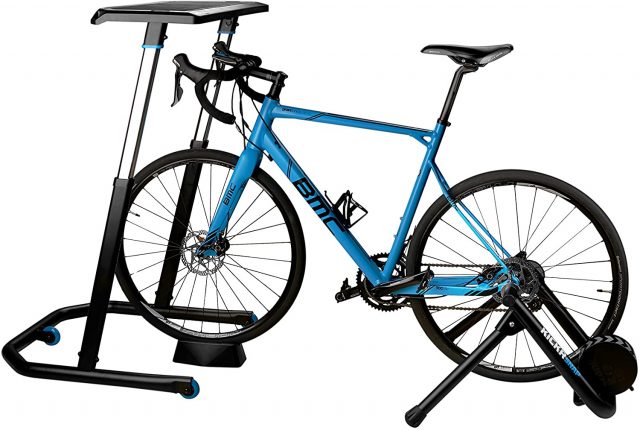 A lower-cost iPad alternative is AirTurn’s $79 telescoping, clamping TechAssist tablet stand, which accommodates up to a 12.9-inch iPad Pro with reasonable, if not rock-solid, stability.

You can simplify matters, though at a higher cost, by investing in a “smart” trainer with built-in sensors. Such a trainer keeps track of speed and cadence along with power (in watts), all of which register in Zwift during a virtual ride. Smart trainers, which plug into a wall outlet, provide additional benefits.

In many cases, they can turn control of a ride over to Zwift. For instance, if you are climbing an onscreen hill, the trainer ratchets up the resistance to simulate the added exertion needed to conquer a real-life hill. Likewise, going downhill onscreen eases up on the trainer tension for faster, easier pedaling. This makes for a highly realistic ride, which adds to the fun while providing a fantastic workout.

Smart trainers typically do not measure heart rate, so you will still need an add-on sensor for that.

Shopping for a smart trainer is another great way to get a migraine, with tons of options ranging from $500 to $3500 or more. I settled on Kinetic’s Rock and Roll Control Bike Trainer that, last I checked, cost $524—down from an original list price of $749. This Kinetic model is one of several that are compatible with Zwift to varying degrees. 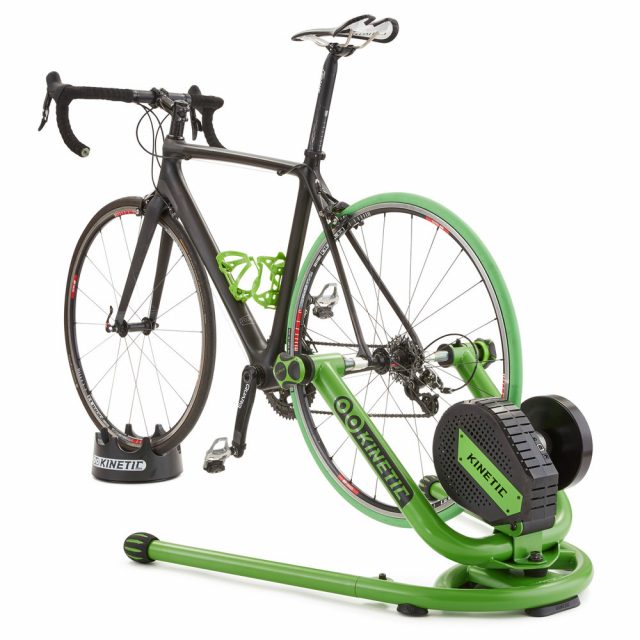 Here is where the fun begins. Once you’ve created a Zwift account and set up your gear, you’re ready to go on your first ride.

And you’re off! As you ride, you will find yourself doing things that are impossible on real-life rides. In London, for instance, one route goes down into a Tube (or subway) tunnel and then promptly guides you onto the track for a subterranean jaunt. The Big Apple is not 2020 New York but more like—Great Scott!—2120 New York, with flying cars, translucent sky roads, and other futuristic touches. 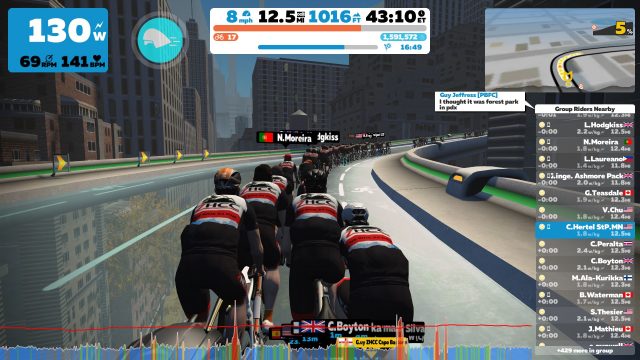 Then there’s Watopia, where almost anything goes. You’ll find yourself pedaling alongside brachiosauruses, parasaurolophuses, and scampering velociraptors in a Mesozoic forest. You’ll also swoop past Mayan pyramids in the jungle, ride around volcanoes spewing lava in what looks an awful lot like Mordor, and admire exotic marine life as you pedal through clear underwater tunnels. 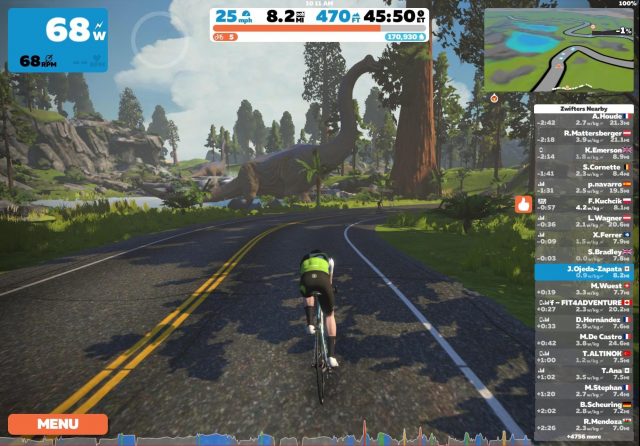 Meet Up On Zwift

Even with all of the virtual exotica, Zwift would start to get tedious if solo rides were your only option. Fortunately, it’s also a communal experience. That is why it’s described as a “massively multiplayer online training program.”

Shared rides are available in several ways. When picking a realm and a route for a ride, you have the option to “join another Zwifter” from a list of available users. This is a good way to make new friends.

Zwift is chockablock with public events—ranging from entry-level group rides to pro-grade races—for your consideration. There are tons of clubs to join, too. Zwift is even hosting a virtual version of the Tour de France for 92 men and 68 women from a total of 40 professional teams starting on 4 July 2020. (The fate of the real Tour in August and September remains up in the air.)

Your best bet, however, is a private meetup, which involves making a date with one or more of your Zwift cycling friends in a realm and on a route of your choosing. This, confusingly, is done using a separate, mobile-only Zwift Companion app, not in the main Zwift app.

I hadn’t done any Zwift meetups pre-pandemic, but they became a vital part of my exercise regimen as society clamped down around me. It has been a great way to spend some time with Chris and other buds who I could not always easily meet in person; we used a voice-chat app such as Discord to talk as we furiously pedaled.

The Zwift folks tell me that, because of the pandemic, private-meetup usage has risen eightfold—outpacing a threefold overall jump in the use of the service in recent weeks. As a result, Zwift has increased the total number of users who can simultaneously participate in a meetup from 50 to 100.

Runners Can Zwift Together, Too!

Setup is a bit simpler than it is for bicyclists. You need only attach a pod-like wireless gizmo to one of your shoes for tracking of cadence and pace. The data is then transmitted to the computing device that is running the Zwift software. There are many shoe pods on the market—Zwift’s own $30 RunPod works well.

A fancy alternative is a Bluetooth-compatible treadmill, which is roughly the equivalent of a smart trainer for bicyclists.

I dabbled a bit in Zwift-based running and enjoyed it, but much less than I did Zwift cycling. It is harder to appreciate the exotic scenery on a jog when you see so little of it. On a bike, you cover more ground and take in more of the landscape. This option is no longer available to me, in any case, since I used it with a treadmill at my office’s gym, which is now shut down due to the pandemic.

For bicyclists, Zwift costs $14.99 per month. You can test it at no cost for 25 kilometers—and that 25K allotment renews at the start of every month if you need more time to make up your mind. For runners, Zwift is free—for now.

For help getting started (or just to learn more about the service as you consider whether to sign up), Zwift has published two series of YouTube videos, one for cyclists and the other for treadmill users. The company also provides detailed “Get Zwifting” informational text with pictures.

An Essential Pandemic Service for Cyclists

In 2019, I attained my lifetime pinnacle of athletic accomplishment—logging several “century” (100-mile) rides, and pulling off a 4-day, 75-mile-per-day ride across northwestern Minnesota, among other feats. A life-threatening sickness in the autumn prevented me from achieving my 3000-mile goal for the season, but I vowed I would come back strong this year.

Then the pandemic hit, laying waste to my 2020 cycling plans. I’m getting some outdoor riding in, but nowhere near what I’d hoped.

Zwift has turned out to be a godsend, allowing me to train hard while enjoying myself as I explore its many wonders. It is no substitute for outdoor cycling—but where else would I see a T-Rex?