Surprisingly, given how late in the cycle they come for Apple’s current operating system releases, these updates offer not only the usual “bug fixes and improvements,” but also some notable new features, such as the Car Keys feature advertised for iOS 14 and new options in Apple News.

As always, the question is when you should install these updates. Unless you’ve just bought a BMW that rolled off the line in the last two weeks or are an Apple News zealot, we recommend the usual caution. Wait a few days to make sure nothing new crops up and then install.

This addition comes as a bit of a surprise since Apple advertised it for iOS 14, but Car Keys has arrived in iOS 13.6 and watchOS 6.2.8. The feature lets you use your recent iPhone or Apple Watch Series 5 as the key for your car, enabling you to unlock and start your car, even up to 5 hours after your iPhone battery runs down. You can also share car keys with others and restrict what those other users can do, including limiting the stereo controls and top speed. As one might want to do for a teenage driver.

Sounds fantastic, right? The bad news is that the car must have the necessary NFC hardware baked-in. So far, the only manufacturer to support it is BMW, which says it’s adding the feature to numerous models manufactured after 1 July 2020—you can check to see if your car is compatible via the vehicle tab in the BMW Connected app.

Almost no one can use Car Keys right now, but many more people—125 million according to Apple—might appreciate the four new features these releases add to Apple News:

We’re not sure how popular any of these features will be. Still, Apple investing so much effort in news is notable, especially the Apple News Today podcast, which is the company’s first foray into creating a news program itself, even if it draws its content from articles on Apple News.

The Health app in iOS 13.6 has an entirely new category of biometrics: symptoms. To see these, tap the Browse tab in Health and then tap Symptoms. You can track things like body aches, runny nose, coughing, sore throat, wheezing, vomiting, loss of smell, and fever. 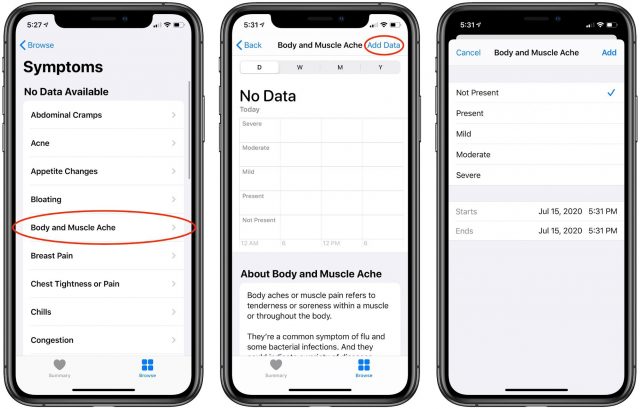 Apple undoubtedly added this feature in response to the COVID-19 pandemic, but it includes a broad list of symptoms that fall outside those typically exhibited with COVID-19. It could be a real help in tracking the progression of any illness.

If you’re tired of Apple forcing you to download updates that take up space on your devices, even if you weren’t ready to install them, you can now turn that off. Both iOS 13.6 and iPadOS 13.6 include a new setting to control if system updates automatically download to your device while connected to Wi-Fi. You can find that switch in Settings > General > Software Update > Customize Automatic Updates.

The updates also fix a number of bugs. This first list of fixes applies to both iOS 13.6 and iPadOS 13.6, which:

A few problems are specific to iOS 13.6, which:

macOS 10.15.6 Catalina receives the new Apple News features, along with some changes that:

As with previous updates to Catalina, Apple said nothing about fixes for problems users have experienced with Mail. However, the most recent comment in Michael Tsai’s long-running thread warning about data loss notes that Mail’s build number has changed, so it’s possible that Apple made some changes.

The watchOS 6.2.8 update adds Car Keys support to the Apple Watch and makes it so users in Bahrain, Brazil, and South Africa now have support for the ECG app and irregular heart rhythm notifications.

You can install the update, which weighs in at 118 MB on an Apple Watch Series 5, from the iPhone’s Watch app: go to Watch > General > Software Update.

As usual, the tvOS 13.4.8 update notes are sparse, promising only “general performance and stability improvements.” The update includes 17 security fixes, largely shared with the other operating systems.

If automatic updates aren’t on, you can update your Apple TV HD or Apple TV 4K by going to Settings > System > Software Updates. We just let ours update automatically when they get around to it. Let us know if you notice any changes.