Editor’s Note: In May 2019, I stayed with Charles Maurer and his wife Daphne for a few days while attending the Collision conference in Toronto. At that point, Charles was in the final throes of laying out their book, Pretty Ugly: Why we like some songs, faces, foods, plays, pictures, poems, etc., and dislike others. Every day when I came back from the conference, I found Charles at his Mac, swearing at the latest problem created by QuarkXPress. Although I don’t know QuarkXPress, I’ve laid out many books in Adobe InDesign and have years of experience working with PDF ebooks. I can thus say, from personal experience, that what Charles relates here is only the tip of the iceberg of what he went through. In the end, after much troubleshooting and experimentation, the best I could recommend was that he cut his losses and switch to InDesign, a luxury that he couldn’t afford given publishing deadlines. –Adam Engst

If you ever need a page layout application, do not buy QuarkXPress.

Eighteen months ago, I needed to lay out an illustrated book. The only heavy-duty choices at the time were QuarkXPress and Adobe InDesign. Both offered demos, so I tried both. Both seemed to have comparable features and limitations. I found InDesign more confusing, and I dislike Adobe—Creative Cloud requires a pricey subscription and fills your drive with files—so I bought a copy of QuarkXPress. 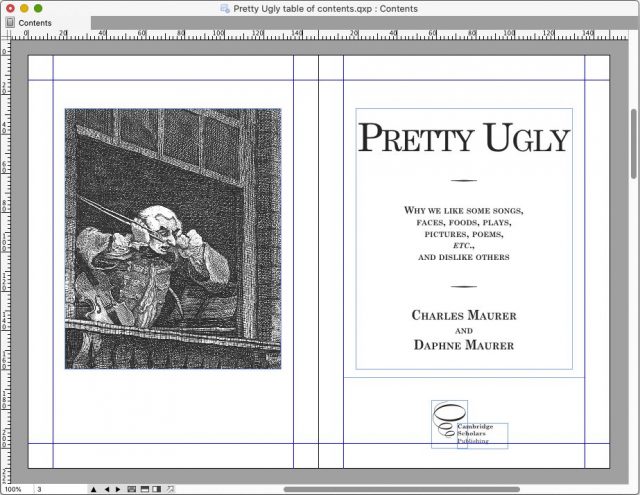 What a mistake! QuarkXPress is the most bug-ridden application I have used in 36 years of working with the Mac.

You would not want to read the full litany of the faults I found—even assuming I could remember them all—but here are a few problems that give a sense of what I put up with.

In QuarkXPress, a book requires a set of separate files for each chapter and section, plus two special files that keep track of the book’s contents and pagination. QuarkXPress crashes so frequently that I learned to save my work every 5 or 10 seconds and to keep open only the chapters I was working on. This strategy largely preserved my chapter files, but it did not prevent the special files from becoming corrupt. For example, once when trying to open the book, I saw this unintelligible alert:

If I clicked the default OK button, this message popped up:

This is not a Job Jacket file.

If I clicked Cancel, I saw:

This book cannot be opened because information in the Job Ticket is damaged.

I quit QuarkXPress, deleted its cache, reopened the application, and tried to use backup copies of the special files. The same messages appeared. Eventually—I don’t remember how—I managed to work past those dialogs, but I still haven’t regrown all the hair I pulled out in the process.

Another time, dialogs popped up saying that I needed to create the special files afresh by saving the individual chapters under a new name and recreating the book. When I did this, QuarkXPress worked… for a couple of minutes. Then it crashed again, and once again corrupted its files.

At this point, I wrote to Quark support asking for help. I told them that I had given up on most of the automatic features that the special book files were supposed to enable—cross-referencing, maintaining a table of contents, indexing—but I preferred not to renumber all of the pages by hand. I asked if there was a workaround for entering the starting page number of each chapter manually and an easy way to assemble the chapters manually. They replied that answering my question required my paying them a fee.

If an application cannot maintain its own files without corrupting them, then any self-respecting developer would figure out why or provide a workaround, not charge for support. I would call this a form of ransomware.

Eventually, I gave up trying to replace the special files with backups and tried replacing the entire book with the previous night’s mirror: 171 items, 2.6 GB. That worked—until QuarkXPress destroyed the files again.

You have applied a faux bold style to an area that contains a transparency, which might cause the font to display incorrectly in your final output. Use a bold version of this typeface to avoid output issues. Do you want to continue?

Troubleshooting this error took a lot of time because the message said nothing about the location of the problem and because, despite the error message, the problem turned out to have nothing to do with any font or even with text. I wanted a box containing a picture, so I defined a box—a rectangle with thin lines—then pasted a PNG file into it. This is a normal way to lay out a page, but it turned out that QuarkXPress wanted me to paste the picture first and then draw the box. When I finally stumbled across that solution, the font error stopped appearing when I tried to print.

I used QuarkXPress 2018. Since then, Quark has released two new versions, each with more features. More features might be useful, but only if the application works, and the version I used was so bad that I cannot conceive the new releases to be worth trying.

I have insufficient knowledge to recommend alternatives to QuarkXPress for book production, but my friends who use InDesign say it works well. More recently, an inexpensive alternative has appeared that looks interesting: Affinity Publisher ($49.99). For pamphlets and posters, Apple’s Pages ought to be adequate, but I use and can recommend the more malleable EazyDraw ($95).

If you found the information in this article valuable, Charles asks that you pay a little for it by making a donation to the aid organization Doctors Without Borders.

Comments About Unless You Are a Masochist, Do Not Buy QuarkXPress