Apple has announced that it is releasing a special version of the iPhone to approved security researchers as part of a new Apple Security Research Device Program (SRD). The SRD, which was originally announced during last year’s Black Hat information security conference, is a standard iPhone with key security controls disabled to allow security researchers to run their own tools. Apple will provide SRDs on one-year renewable loans to researchers who are accepted into the program. 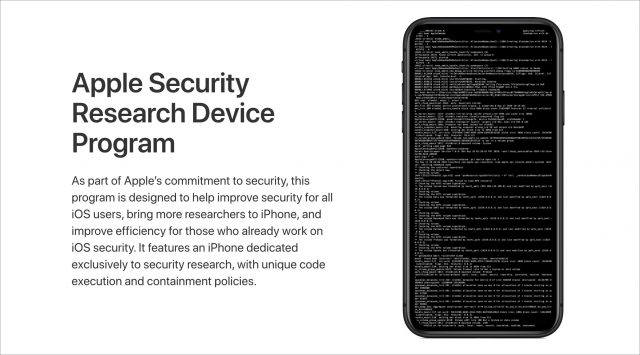 In a private briefing, Apple provided additional details about and background on the SRD program.

Who Can Get an SRD

Apple said that anyone with a track record of “systems security” research is encouraged to apply, even if they have little to no experience with iOS. The program has two key goals: to open up opportunities for those with experience on other platforms by lowering the bar for iOS research and to make security research more efficient for existing researchers.

Until now, researchers were largely limited to two options. They could use standard, secure devices and attack them almost blindly, which was inefficient at best. Or they could rely on jailbroken devices that were often limited to earlier versions of hardware and software because every jailbreak is a severe security vulnerability that Apple tends to patch swiftly.

What Makes an SRD Different from a Regular iPhone

The SRD lacks code execution and containment capabilities on multiple levels of the hardware and software to allow researchers to run their own toolchains, including common research tools (which we assume need to be compiled for the platform). As an example, the SRD ships with a terminal shell out of the box, so the researchers can employ a wide range of debugging tools and access low-level logs that are normally inaccessible. A researcher could, for example, deploy a full network monitor onto the device.

Researchers can also run their tools with arbitrary entitlements, including Apple’s own entitlements that are never available to developers. Entitlements are the key sandboxing control on iOS to restrict what applications can do.

Although the SRD will support iOS 14, it needs to run special Apple-provided versions of iOS since regular consumer builds have all the security controls enabled.

How the SRD Will Be Useful to Researchers

One of the interesting aspects of the SRD program is how it will enable research on the Apple iOS ecosystem beyond traditional device security. For example, in 2019, the Citizen Lab discovered that Tibetan groups were being targeted with government-sponsored mobile malware, including attacks on iOS devices.

An SRD could help researchers run security tooling to better identify and research these kinds of attacks. When asked if Apple would support this general kind of research, which differs from traditional vulnerability hunting, company reps responded, “They are supporting the security of our users… that would likely qualify as strong research.”

A few other interesting points came up in our discussion:

Constructive Progress, but with Risks

Overall, I see this is as a highly positive move for Apple. It can be incredibly difficult to build a toolchain for a device as locked-down as the iPhone since you are effectively flying blind until you crack the security deeply enough to install some instrumentation. Assuming the SRD works as described, it will remove many of the major roadblocks to iOS security research and could result in discoveries that provide better security for us all.

On the whole, Apple’s program requirements and restrictions appear reasonable, and I look forward to seeing how they work in practice. However, there is some risk that the program restrictions will muzzle some researchers while Apple sits on vulnerabilities. Apple’s track record for fixing issues has been pretty good in recent years, but we can’t dismiss this concern out of hand.

One final note: I don’t expect Apple’s highly gated access to the program to change in the future. An opportunity like this is ripe for abuse by malicious governments and private organizations that already pay large bounties for iOS vulnerabilities. The SRD reduces barriers for research that contributes to Apple’s ecosystem security without lowering the boundaries for malicious actors.