Since 2017, the Setapp service has been providing subscribers with access to an ever-increasing number of Mac apps for a single $9.99-per-month fee, with options for families and businesses. See our full Setapp coverage for details.

By my count, Setapp is now up to 193 Mac apps, but the big news that the company just announced is that it is adding iOS apps to the service. At the moment, eight apps are available: the iOS versions of Mac apps 2Do, Gemini, MindNode, Paste, PDF Search, SQLPro Studio, Taskheat, and Ulysses.

In conjunction with the addition of iOS apps, Setapp has switched to a per-device subscription approach. The main subscription remains $9.99 per month, but to use the iOS apps, new users have to add another device for an additional monthly. Previously, you could use Setapp on a second Mac just by signing in, and it appears that existing users now have two devices available, one of which could be used for an iOS device. iOS apps aren’t yet available for those with Family plans, but Setapp is working on it.

As a result of feedback from the Setapp community, today we’re changing the price for additional devices for all Setapp plans to make it more affordable to start using iOS devices with a Setapp subscription. The price for each additional device has been decreased from $4.99 to $2.49.

Kudos to Setapp for responding to its users so promptly. Since enabling both an iPhone and an iPad would require two device subscriptions, $4.99 for each of them seemed expensive, whereas $2.49 per device feels more reasonable.

As with Setapp’s Mac apps, the amount you’d save by subscribing through Setapp rather than paying or subscribing through the App Store varies, but Ulysses alone has a $5.99 per month subscription cost through the App Store. That said, before this change, the iOS versions of Ulysses and a few other apps were free for Setapp users—our security editor, Rich Mogull, found that his previously free activation of Ulysses ends at the end of the month. So this change is good for developers but may be more expensive for users who use only one or two iOS apps. 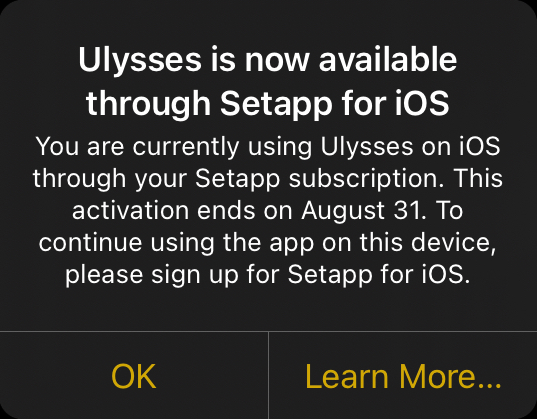 Adding an iOS App to Setapp

Assuming you have a free device slot available, registering an iOS app via Setapp is easy, if somewhat unusual. You start by launching Setapp on a Mac and navigating to the app you want to install. 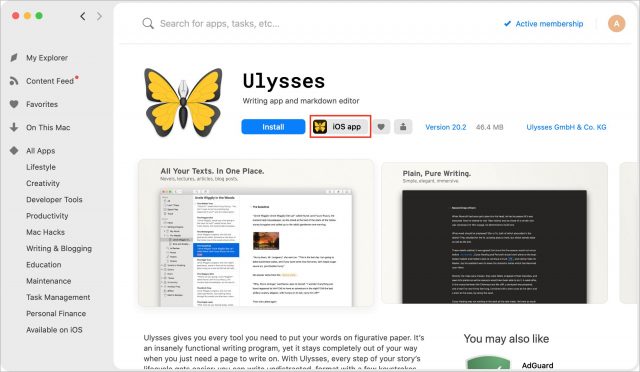 Once there, click the iOS App button, which presents a dialog with a QR code to scan using the Camera app on your iPhone or iPad. 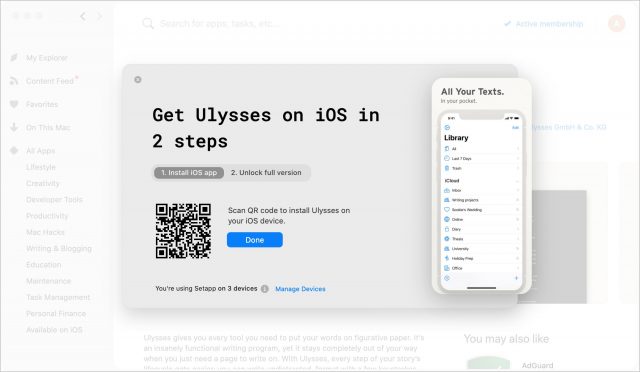 Scanning that QR code simply loads the App Store page for the app, from which you can download the standard app from the App Store—there’s no special version in play here. All the iOS apps in Setapp are free to download with in-app purchases.

The magic occurs in the next step, where you click Done or move the slider to “2. Unlock full version.” That reveals another QR code that, when scanned, opens the downloaded app and registers it (and your device, on the first usage) into your Setapp account. From then on, the app works just as though you had purchased a normal subscription. 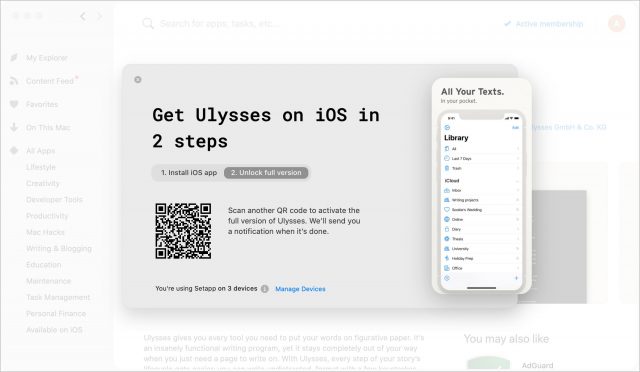 I’ve confirmed that the process works as documented.

How Is This Acceptable to Apple?

You’d be forgiven if this sounds like an end-run around Apple’s 30% fee, and indeed, Apple’s App Store Review Guidelines state:

3.1.1 In-App Purchase: If you want to unlock features or functionality within your app, (by way of example: subscriptions, in-game currencies, game levels, access to premium content, or unlocking a full version), you must use in-app purchase. Apps may not use their own mechanisms to unlock content or functionality, such as license keys, augmented reality markers, QR codes, etc. Apps and their metadata may not include buttons, external links, or other calls to action that direct customers to purchasing mechanisms other than in-app purchase.

However, Setapp is adamant that its approach is legit, responding to a question on Twitter with:

We would never put our vendors at risk. Therefore we’ve received approval from Apple before going forward. It was confirmed that applications with integrated Setapp iOS framework fulfill the App Store Guidelines.

Indeed, since all the iOS apps in question also work on the Mac, they would seem to fall under this exception:

3.1.3(b) Multiplatform Services: Apps that operate across multiple platforms may allow users to access content, subscriptions, or features they have acquired in your app on other platforms or your web site, including consumable items in multiplatform games, provided those items are also available as in-app purchases within the app. You must not directly or indirectly target iOS users to use a purchasing method other than in-app purchase, and your general communications about other purchasing methods must not discourage use of in-app purchase.

Of course, Apple remains the ultimate arbiter of how that paragraph will be interpreted. One point of concern—the fact that the purchase is mediated through Setapp—would seem to be addressed by Setapp’s statement that apps that integrate the Setapp iOS framework fulfill App Store guidelines. Another hitch could be the requirement that “those items are also available as in-app purchases within the app.” It’s hard to know how the Setapp approach of compensating developers with a proportion of subscription fees based on app usage would translate to a comparable in-app purchase.

When I asked if Setapp planned to add any iOS-only apps or if the only iOS apps would be companions to Mac apps, Julia Petryk’s response suggested, albeit a bit ambiguously, that iOS-only apps might be in Setapp’s future: “Yes, iOS apps will go through the review process by the Setapp review team and in case of their approval, they will join Setapp.”

Given Apple’s explicit prohibition—Apps may not use their own mechanisms to unlock content or functionality, such as license keys, augmented reality markers, QR codes, etc.—it’s hard to imagine that Apple will allow Setapp to provide access to iOS-only apps. But if there’s one thing we’ve learned with the App Store, it’s that Apple reserves the right to interpret or change the rules as it wants.

For now, though, we’ll give Setapp points for pushing the boundaries of what’s possible in the iOS world and providing a service that at least some subscribers will appreciate. Whether it’s worthwhile remains a personal question based on how many of the iOS apps you would use and how many devices you need to add. Still, I have to say that we enjoy having access to the Setapp library of Mac apps on an ongoing basis.