When you document technology for a living like we do, you put a lot of thought into screenshots. Even if you don’t write about tech professionally, there are times when screenshots are essential to document bugs, request help, or show a loved one how to do something.

We’ve found the Picsew app for iPhone and iPad invaluable for combining and modifying screenshots, and, most importantly, applying device frames to iPhone, iPad, and Apple Watch screenshots. It’s a free download in the App Store, with a $0.99 in-app-purchase to upgrade to Picsew Standard or $1.99 to upgrade to Picsew Pro. You need Picsew Standard for adding device frames, annotations, high-quality exports, and more, but Picsew Pro is necessary only if you want to make multiple screen screenshots by recording video rather than combining static screenshots.

Picsew offers a lot of tools. Here are the ones we use the most often.

We usually like to pair portrait-orientation iPhone screenshots together, because otherwise they’re way taller than they are wide and leave an awkward amount of whitespace to the right. We have a number of different tools to pair images, but Picsew makes it simple.

When you open Picsew, it shows the most recent images in your Camera Roll. You can tap Recents at the top of the screen to switch to another Photos album, like Screenshots.

Whichever view you’re in, tap the images you want to stitch together in the order in which you want them to appear. The thumbnails turn blue and a number appears on them, reflecting the left-to-right order (or top-to-bottom, if you arrange them vertically) in which Picsew will combine them. 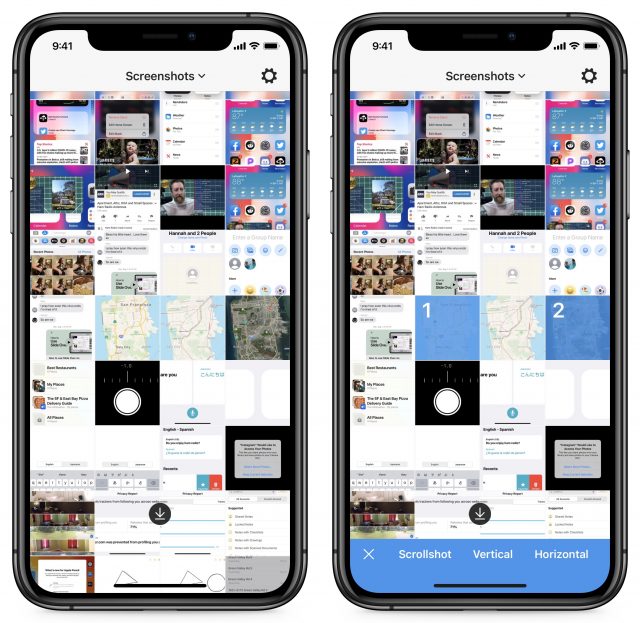 A blue bar also appears at the bottom of the screen with options for how to stitch the photos together:

When you select several images and tap Horizontal in the blue bar, Picsew displays the images side by side with little yellow pencil icons on the edges. You don’t need to do anything more—you can tap the Share icon to save or share the combined image—but Picsew provides some ways you can improve the presentation. 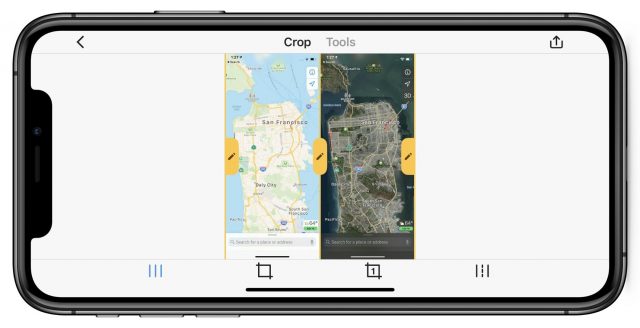 In the process of combining multiple images into a single picture, you might want to do some cropping. To do that, you use the little yellow pencil icons. It took us a while to figure out how Picsew’s cropping works because it’s a bit different than similar tools in most Mac image-editing programs. First, note that Picsew provides four cropping tools at the bottom of the screen. From left to right:

As an example, consider the Edge Crop tool. When you select it, pencil icons appear on all four sides of the combined image. Perhaps you want to crop the top of the image out in order to focus attention on search fields at the bottom. Here’s how you’d do that: 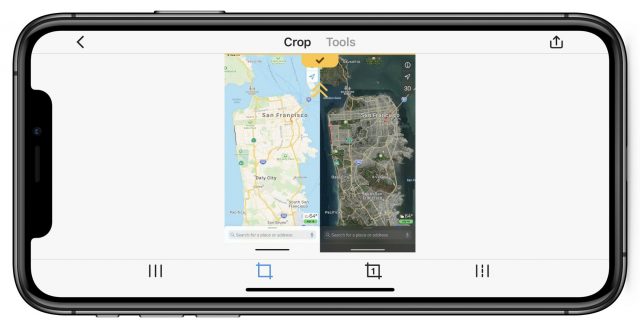 That’s very different from how cropping works in Preview and Pixelmator on the Mac, where you select an area to keep and crop out the rest. But once you become accustomed to Picsew’s approach, it makes more sense on a small touchscreen than how it usually works on the Mac.

One of our favorite features of Picsew is that it can remove scrollbars and clean up the status bar in iOS screenshots. After you crop your image, or even if you don’t, tap Tools at the top of the screen. In Tools view, a number of different tools appear in the toolbar at the bottom. Tap the magic wand to reveal switches for Clean Status Bar and Remove Scrollbar.  Enable one or both of the switches to make Picsew apply their effects immediately. 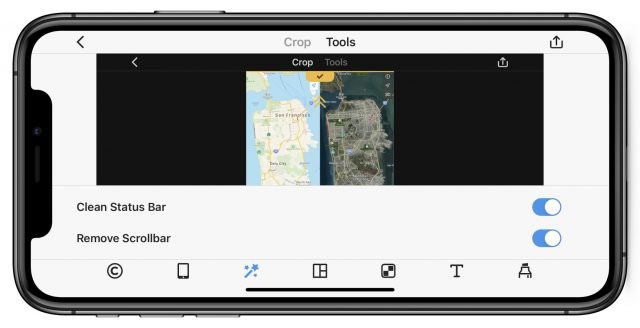 Remove Scrollbar is self-explanatory: if there’s a visible scrollbar in the screenshot, that switch removes it.

Clean Status Bar regularizes the screenshot’s status bar by setting the time to 9:41 (Engadget explains why), the cellular reception bars to full, Wi-Fi reception to full, and battery life to 100%. We like using this when we can’t crop the status bar out entirely, as we feel it makes our screenshots look a bit more professional and prevents things like a weak cellular signal or a low battery gauge from distracting from the content.

Those switches work even if you have multiple screenshots stitched together. You can also set Picsew to apply them automatically. Tap the back arrow to return to the main screen and then tap the gear in the upper-right corner. Then tap Smart Recognition and turn on Auto-Remove Scrollbar and Auto-Clean Status Bar.

When you pair images together, Picsew jams them together without any space in between, which isn’t ideal. However, it’s easy to add a border, and if the border is both between the images and set to the background color of the destination page (usually white), it can provide the desired separation.

In the Tools view’s toolbar, tap the fourth icon from the left, which looks like a window frame. Five more tool icons appear above the toolbar. From left to right: 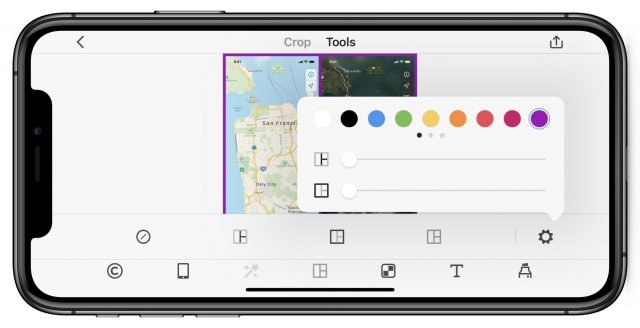 Device framing is the feature that brought us to Picsew in the first place. On a Mac, screenshots generally have context—they’re of a window or a menu or a portion of the screen that somehow makes sense. Screenshots of the iPhone, iPad, and Apple Watch, however, are just rectangles, and it’s a help to readers if the screenshot looks like an iPhone, iPad, or Apple Watch.

In the Tools view’s toolbar, tap the Mockup icon (the second one from the left, which looks like an iPhone), and then tap one of the colors in the top toolbar to place a similarly colored frame around your screenshot. Picsew applies the correct frame automatically, whether the screenshot is from an iPhone, iPad, or Apple Watch. It does this by matching the size of the screenshot with possible device frames. If you tap the iPhone icon to the right of the colors in the top toolbar, you can choose from different available frames, even when they’re silly, such as bordering an iPhone 11 Pro screenshot with an Apple Watch frame.

Unfortunately, framing works on only a single image, not if you’re trying to combine multiple images. The workaround is to apply frames to them one at a time and combine later. In Picsew’s photo picker, choose one image, tap Adjust in the blue bar, tap Tools, apply the device frame you want, and repeat that for any other images you want to combine with it. Then, in the photo picker, choose the screenshots you framed and combine them. Happily, the frames include some white space, so you don’t need to add a border between the images manually.

Once you’re happy with the results, tap the Share icon in the upper-right corner to send the final image to its final destination. Picsew provides options to save the image to Photos or the Files app. Or you can tap Share To to see the standard share sheet.

We usually use AirDrop to send the final image directly to our Macs.

Since we are extremely proficient with Preview on the Mac (we wrote a book about it, Take Control of Preview), we tend to stop there in Picsew and do any additional edits in Preview. However, Picsew offers additional tools that others might find useful:

The main thing we’d like to see in Picsew is the capability to frame multiple images while combining them—having to do each one independently and then combine the results is tedious. Because of that, we often rely instead on an iOS shortcut created by Federico Viticci of MacStories that both frames and combines screenshots in one step. It’s faster and easier to trigger from Photos, but it doesn’t provide frames for all (or even many) of Apple’s devices, most notably the 10.5-inch iPad Pro that we both use. It’s also essentially impossible to edit; it’s amazing that Federico was able to put up with Shortcuts long enough to create it.

One other feature that Picsew could use is the capability to crop images to specific dimensions. Sometimes you need an image that’s exactly 1280 by 800 pixels, for instance, and that’s not a common feature in iOS apps. However, our friend Khoi Vinh recently created another iOS shortcut that does just this. We haven’t tried it yet, but it’s worth a look if you need such a feature in iOS.

Despite these areas where Picsew could improve, it’s easily worth a dollar to anyone who regularly works with iPhone, iPad, or Apple Watch screenshots.

Comments About Picsew Is Indispensable for Professional iOS Screenshots