I know that this article is a radical departure from TidBITS’s usual focus on Apple and technology topics. It is, however, not unprecedented, and I reserve the right to publish anything I want. As with “A Personal Statement on War in Iraq” (24 February 2003), my conscience does not allow me to stay silent in the one place where I feel my words could make a difference.

In November, Americans will vote—whether or not they physically go to the polls—in a presidential election. I strongly encourage each and every TidBITS reader who is eligible to vote in US elections to do so—visit Vote.org to register to vote, verify your registration, request an absentee ballot, learn about COVID-19 impacts on your local voting process, and more. 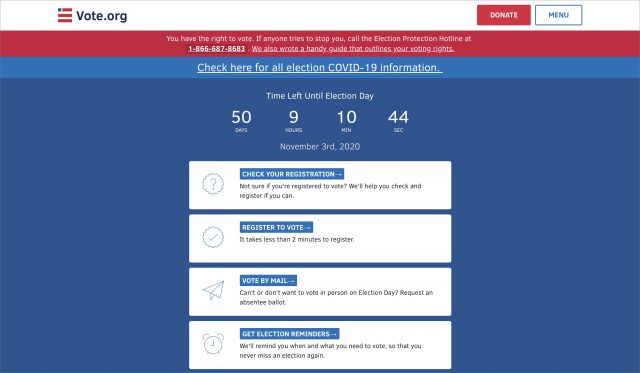 I will be voting for Joe Biden for president as soon as my absentee ballot arrives. The overarching reason is that, from my perspective, the last four years of Donald Trump’s presidency stand in stark opposition to my personal and professional values.

As the CEO of a company, the past and current president of nonprofit boards, and someone who coaches adult athletes and teams, I am outraged at Trump’s astonishing lack of leadership. I believe leadership is about solving problems and rallying people behind a vision of a better future for all. Trump’s modus operandi is instead relentless self-congratulation, coupled with dodging responsibility, blaming political enemies, and creating conflict among the populace. As a manager, Trump’s record has been abysmal—the turnover rate among the most influential positions within the executive office of the president is 91%. His failures extend to the Cabinet as well, where the turnover significantly exceeds that of any other recent administration. Throughout the COVID-19 pandemic, I’ve seen far better leadership from New York governor Andrew Cuomo and Cornell University president Martha Pollack.

As someone with some level of expertise in the narrow world of Apple technology, I am appalled at Trump’s continual efforts to subordinate expertise to ideology and loyalty. The world is far more complex than any one person can even imagine, much less hope to understand, and perhaps no job in the world is more exposed to that complexity than that of the American president. And yet, time and time again, Trump has ignored or buried the work of scientists, eliminated outside advisory committees, belittled law-enforcement officials, accused career civil servants of being part of a made-up “deep state,” and even argued with meteorologists about the course of a hurricane. The true mark of an educated, thoughtful person is that they understand how little they know, particularly outside their field, and they welcome the input, advice, and opinions of experts.

As a journalist for over 30 years, I cringe at Trump’s constant denigration of the media, and his unending refrain that any media coverage with which he disagrees is “fake news.” The media has its challenges, and there are legitimate concerns with fabricated fictions being passed off as news. But the many people I know in the media world are universally devoted to helping readers, listeners, and viewers understand the world around them better. Our jobs are to inform and explain, as best we know how, using the most accurate information we can find. Many people in the media work long hours for relatively low pay and see their work as improving the world. They—and I—do not deserve to be insulted and ridiculed by a sitting president.

As a professional writer who thinks carefully about what he says and the effect his words will have on others, I am offended by Trump’s interminable barrage of tweets that are little more than excuses for public preening and continued insulting of his enemies. Then there are the incendiary and potentially illegal comments about four minority Democratic congresswomen joining numerous other racist comments that would get any other federal employee fired. And I know it’s petty, but his capitalization and punctuation are atrocious. In my view, the president—or any leader—should act as a role model for positive behavior.

And finally, as someone, just like many of you, who has largely stayed home since March, I am nauseated by Trump’s politicized response to the COVID-19 pandemic. In the most deadly and economically damaging health crisis the world has suffered since perhaps the 1918 flu pandemic, the unholy amalgamation of Trump’s failings has contributed to what will soon be 200,000 deaths in the United States and the need for an additional $5 trillion in national debt. That’s more Americans than died in World War I and the Vietnam War combined, and unless things improve, we’ll pass the 215,000 combat casualties of the American Civil War in a few weeks. And that $5 trillion will exceed the amount the country spent fighting World War II.

There are plenty of other reasons I would never vote for Trump, including his nepotism and cronyism, his admiration for authoritarian leaders, his refusal to make his tax returns public, the occasional insane proposal like buying Greenland, his disdain for international groups like NATO and the WHO, his solicitation of foreign government interference in US elections, and the numerous lawsuits against him. But those come down to personal beliefs about situations where I know little more than has been widely reported.

I realize that my examples so far amount to voting against Trump instead of voting for Biden. So be it—Biden’s lengthy record of public service doesn’t reveal anything that even approaches the well-documented toxicity and ineptitude of Trump’s public actions over the past four years. We can only speculate as to how Biden would react to different situations; we know how Trump has behaved, and there’s no reason to expect he would change.

I’ve spent many hours thinking about, writing, and documenting what I’ve said here with the hope that it will encourage you to vote. My opinions stem from my particular background and experience, so I won’t tell you how to cast that vote—that’s between you and your conscience.

But at a time when more lives are literally on the line and everyday life is more uncertain than at any time in my memory, I believe Biden and his leadership team have a far better chance of putting the country back on course. Given the domestic issues with the COVID-19 pandemic, the associated damage to the US and world economies, and the need for international cooperation in both the short term to respond to COVID-19 and the long term to address climate change, no election in my lifetime has felt as important.

One final note. I have a rule against political debate in TidBITS Talk. As such, I have disabled comments on this article. If you wish to communicate with me about it—in a polite and constructive fashion, a courtesy I extend to all my correspondents—you can send me direct email, and I’ll respond as seems fitting.

Comments About Why I’m Voting for Biden for President