Sandwiched between the announcements of the new Apple Watch and iPad models was Apple’s “How may we be of service?” pitch. Services such as the App Store and Apple Music make up an ever-increasing portion of the company’s revenues, and Apple is doubling down on the concept with two new initiatives: Apple Fitness+ and the Apple One service bundles.

Over the past few years, Apple has realized that, for many people, the major pull of the Apple Watch revolves around fitness. So much so, in fact, that in watchOS 7, the Activity app has been renamed to Fitness across Apple’s entire line.

But there’s more to the move than a name change—Apple is introducing Apple Fitness+, “a workout experience” that combines metrics from an Apple Watch Series 3 or later with studio-style workouts that you view on an iPhone, iPad, or Apple TV. Apple says it has hired world-class trainers to give the classes, and the workouts are scored to motivating music curated by the trainers. (And if you subscribe to Apple Music, you can save the playlists.) 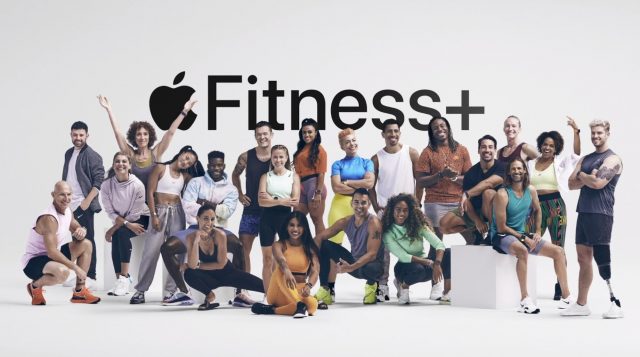 Workout types include cycling, treadmill, rowing, HIIT, strength, yoga, dance, core, and mindful cooldown. If you’ve never done any sort of fitness classes before, there’s also an Absolute Beginner program that helps coach novices through the basics of movement and exercise. Many of the workouts, apart from cycling, treadmill, and rowing, can be done with no equipment at all, and a set of dumbbells will aid in some of the others. Treadmills that support Apple GymKit will prompt users to connect their Apple Watch so the metrics are in sync.

Speaking of metrics, these aren’t just the canned virtual workouts that so many people have become accustomed to during the pandemic. Apple Fitness+ works across multiple Apple devices, so if you start a workout on an iPhone, iPad, or Apple TV, the correct workout type automatically starts on your Apple Watch (Series 3 or later). While you’re working out, heart rate and workout times are shown on the screen and can even be emphasized when the trainer asks participants to check their heart rates or start a countdown timer. There’s also a Burn Bar that lets users compare their current efforts against people who have previously finished the workout. The Apple Watch’s familiar rings also appear on screen to provide feedback and motivation. 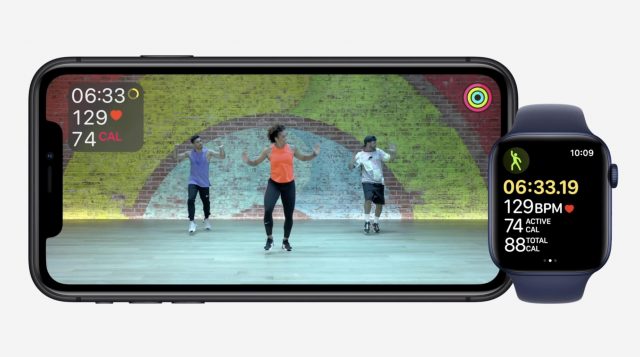 Apple promises that trainers will post fresh workouts every week with a range of lengths, disciplines, and music genres. The selections will include the latest hits, chill vibes, pure dance, hip-hop/R&B, Latin grooves, rock, upbeat anthems, and top country—it didn’t sound as though there would be jazz or classical options. I hope the music is optional because I often dislike the choices I’ve heard in workout classes.

Although I’m a runner, I have a passing familiarity with the fitness world, and at first glance, Apple seems to have done a good job with Apple Fitness+. The integration across devices and simplicity of starting workouts and tracking progress is welcome, and the timing is especially helpful in these days of being stuck at home due to the pandemic and wildfire-caused air quality problems.

A broader concern is that Apple will likely be taking business away from individual trainers and small gyms that have been forced to conduct classes online during the pandemic. Few large companies are likely to be able to compete with Apple’s production values, and smaller entrants stand no chance. Such a situation was unfortunately inevitable, and those who make their living with prerecorded training sessions would do well to start emphasizing the interactivity and personal connections that Apple Fitness+ will never provide.

At launch, which Apple says will come before the end of 2020, Apple Fitness+ will be available only in Australia, Canada, New Zealand, the UK, and the US. I suspect that’s mostly a language issue due to having English-speaking trainers, but I’m sure Apple is trying to figure out how best to deliver the content in many other languages.

Apple Fitness+ will cost $9.99 per month or $79.99 per year. Everyone can try it for free for 1 month. If you buy any new Apple Watch, you’ll get a 3-month free trial; buy it from Best Buy, and you’ll get 6 months free. You can also share a subscription with up to five other people in your family with Family Sharing. CVS Health is offering special access to Apple Fitness+ for its clients, customers, and employees—details are still developing.

Quick quiz: how many subscription services does Apple now offer, and how much does each cost per month? The answer is six seven:

(We’ll gloss over the moribund $25.99-per-year iTunes Match, which Apple still supports but says is subsumed by Apple Music.)

If you were to put all the services together (including the Apple Music family plan and the highest level of iCloud storage), it would cost $54.94 per month. Few people probably pay that, but Apple wants to encourage more loyalty to the Apple ecosystem by bundling some of its services together.

Despite the Apple One name, there are actually three discounted service bundles: 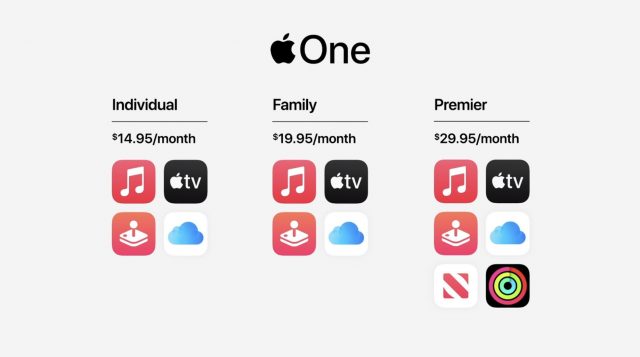 Those discounts are entirely legitimate. The only problem is that the bundles may not fit what you want. For instance, Tonya, Tristan, and I currently share the Apple Music family plan and 200 GB of iCloud storage. We also get Apple TV+ for free because we’ve bought new Apple devices, although we’ve only watched two show episodes from it so far and haven’t continued with either show. So we’re currently paying $17.94, whereas the Apple One Family plan would cost us another $2.01 each month and provide only one additional service—Apple Arcade—which we already sampled and discarded. And the Apple One Premier plan would cost $12.05 more per month, making it worthwhile only if we needed more than 200 GB of iCloud storage (unlikely in the near future) and wanted to subscribe to Apple Fitness+ (not inconceivable)—we’ve also already evaluated and left Apple News+.

Our issue is the lack of free time. If we had a lot more of it, we might be interested in reading some of the magazines available via Apple News+ or playing some Apple Arcade games. But as it stands, our days are booked solid from morning until night, and there’s simply no more time to spend on additional services. Perhaps we’re unusual, but I don’t think so—a lack of time is a common complaint among people we know.

One final note. It’s interesting that Apple offers a yearly option for Apple Fitness+ because it has previously done that only for individual (not Family plan) Apple Music subscriptions, where it costs $99. I wonder if that’s because gym memberships are traditionally sold on an annual basis, which in turn is often the case because gyms know that many people won’t actually come in all that often and can thus oversell their space. More charitably, gyms and Apple might be thinking that if people sign up for a year in advance, they’ll be more likely to stick with an exercise program. Nevertheless, it’s an option we’d like to see Apple offer for all its services, including the Apple One bundles, if only to cut down on the monthly accounting effort for those of us who track our expenses.

How about you? Are you going to try the Apple Fitness+ trial a chance? Will one of the Apple One bundles save you enough money to make it worthwhile? Let us know in the comments.