I have never liked the slippery Siri Remote that Apple shipped with the fourth-generation Apple TV HD in 2015 and continues to offer as the default option for the Apple TV HD and Apple TV 4K. But only recently did I spot a replacement that seemed worthwhile: the Function101 Button Remote for Apple TV.

This $29.95 infrared remote control offers nearly all the features of the Siri Remote when controlling an Apple TV—or at least those I care about. Your list may differ substantially! Because the Function101 remote has a larger array of buttons, it offers not just infrared control of volume for receivers, soundbars, and TV sets, but also muting them and power control. Hallelujah!

(The Siri Remote includes an infrared transmitter that lets you control the volume of supported devices. However, the Siri Remote lacks a mute button, and unless you have a chain of HDMI-CEC-supporting devices set up just right, you can’t use it to power other devices on or off.)

The Function101 remote lacks a touch surface, which is a huge bonus for me. I always have trouble with the Siri Remote’s touch-based controls. Even five years into using the Siri Remote, I rarely tap the rewind/fast forward region correctly. I have no problem with other touch devices, including the Remote app on an iPhone, so I don’t believe it’s me.

With the Function101 remote, you can press honest-to-goodness buttons for skipping 10 seconds forward or back, as well as separate buttons for fast forward and rewind—which advance as you hold them. A four-arrow compass design near the top manages navigation and other features, with an OK button nestled in the middle to make selections or confirm actions.

The molded, rubberized device has a great hand feel, and I love its button pressure, accuracy, and flexibility. It’s among the finest remotes I’ve ever owned for any device, and it’s a manufacturing achievement to combine this level of quality with such a low price.

A few things are missing due to technology and design constraints. Because the Function101 remote relies on infrared communication with the Apple TV, it can’t support Siri voice control. (The technology to enable such support would add substantially to the price.) I rarely asked Siri to do things on my Apple TV—one of the most frequent was “rewind 10 seconds” when I was frustrated with the touchpad—and I no longer need that. Other people I know constantly use voice control, and that makes this replacement a non-starter for them. (On the few occasions I want to use Siri, I just swipe down to reveal Control Center on my iPhone and bring up the Remote app. You can also use regular old Siri in iOS, iPadOS, and macOS to issue commands to your Apple TV, too.) 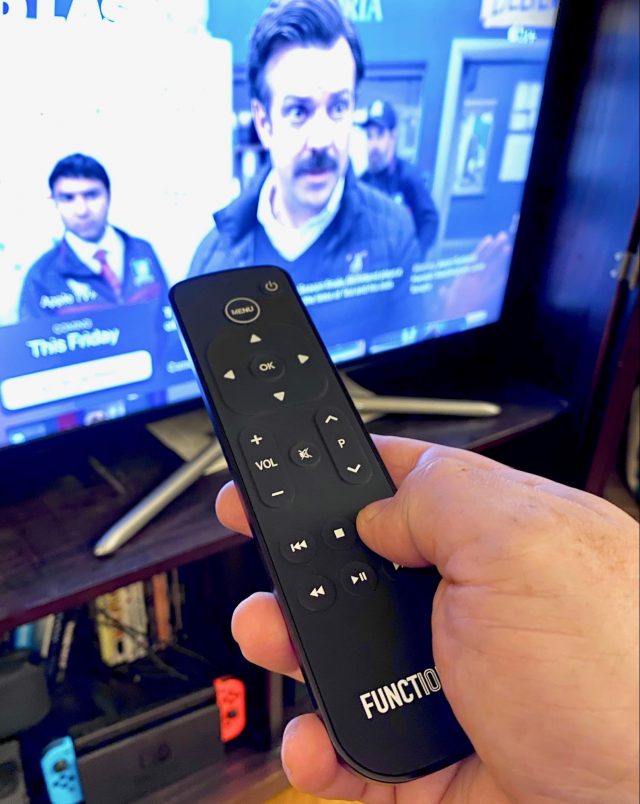 You also can’t swipe to scrub forward and backward across a streaming video’s entire length, something my younger child says is what drives her to keep using the Siri Remote. I don’t mind holding down a button on the Function101 remote for the same effect.

Because it’s an infrared controller, you need line of sight to your sound system or TV and to your Apple TV. That might involve rejiggering your setup. There’s also no TV button on the control, which means you can’t use the Apple TV’s app switcher, which is a little annoying but isn’t outweighed by the many other advantages I find with it. You also can’t tap any button, as you can with a light touch on the Siri Remote’s touchpad, to see the current screensaver’s location.

Although the Function101 remote works out of the box with the Apple TV, initial setup with TV sets and soundbars and the like can be fussy because the remote lacks both a way to program it remotely and number buttons. On remote controls with numeric input, you typically look up your model of TV, receiver, or soundbar in a manual or online guide, then punch in a series of numbers and test until you find the correct infrared control set. Each consumer electronics brand typically has several sets that are used across ranges of devices.

Somewhat unclear instructions on the Function101 website explain that to achieve the same effect, you first put the remote into setup mode, then hold down or press a button repeatedly while carefully making sure you have line of sight to your device. If the volume-up control works with a given code the remote is cycling through, you’re set, and you press OK. I tried this repeatedly with an old Yamaha receiver through which I route all A/V sound output and was initially unable to get it to work.

I contacted customer support, which was overwhelmed with queries due to the volume of initial shipments. It took two weeks to receive a response, but I used all the Apple TV features of the remote in the meantime. When I finally received a reply, it included an abject apology, a direct contact phone number, and step-by-step written advice that was somewhat easier to understand than the previously published instructions. I had it controlling my receiver just a few minutes after that. Yes, it was user error, but magnified by the support site’s poor documentation.

(The trick that solved my confusion? You have to watch your audio device carefully while holding down or pressing the appropriate button to advance codes. There are a lot of codes to go through, so holding down a button makes the most sense. However, if you miss noticing the volume change during the two-second window or you don’t release the button fast enough, you have to cycle through again.)

Is the Function101 Button Remote Right for You?

But for anyone who wants the comfortable press of a well-designed button to control your Apple TV, I highly recommend it. It’s my favorite tech purchase of 2020 that didn’t come from Apple.