Implicit in the use of computer technology is the understanding that it will change, and you will have to go with the flow (see “Why You Should Upgrade (On Your Own Terms),” 4 September 2015). That becomes more true every year, particularly in the Apple world, where the company continually pesters users into upgrading in various ways. Some are technically justified—it’s unreasonable to expect Apple to forgo all forward motion on a system like Reminders, just so it can remain backward compatible forever. Others are downright essential—if you don’t stay within two macOS releases behind Apple, your Mac could be exposed to significant security vulnerabilities that have been fixed in later releases.

But some of the ways Apple encourages updates make using a Mac that’s not running the latest version of macOS a little less comfortable. Most notable among these is how Apple badges the System Preferences icon in the Dock to indicate that a macOS update is available.

On the face of things, that’s not unreasonable. Apple should be alerting users to the release of new versions of macOS. Apple also pushes a notification—again, not something to protest as long as it doesn’t recur too frequently.

Unfortunately, there’s no Apple-provided way to make that System Preferences badge go away, so it constantly reminds the user that an update is waiting. That’s problematic because it teaches users to ignore the badge, which could prevent them from installing a critical security update in the future. It’s also a visual distraction. The macOS interface shouldn’t be cluttered with information that the user has deemed unnecessary.

In the past, there was a softwareupdate -ignore command you could issue in Terminal to make the badge disappear, but Apple made it so that option is available only for Macs that are managed by an MDM solution. In other words, IT admins who have not yet certified a new version of macOS as compatible with their organization’s tools can hide the badge for their users, but everyday Mac users can no longer avail themselves of this trick.

With macOS 11 Big Sur, Apple seems to have taken the upgrade nags a step further. In the Updates screen of the App Store app, most Mac users will be offered an update to GarageBand 10.4.1. However, if you haven’t yet upgraded to Big Sur, trying to update GarageBand will result in an admonishment that the update isn’t compatible with previous versions of macOS.

At first, I thought this was just a mistake, an assumption bolstered by a report from a TidBITS reader in SlackBITS who called Apple support and was told it was just a bad package that would be fixed soon. It makes little sense that GarageBand, alone among Apple’s major productivity apps, would be restricted to Big Sur. (Most of the rest have been updated recently and still work in earlier versions of macOS.)

Nevertheless, both Apple’s GarageBand page and the App Store page for GarageBand explicitly say that Big Sur is now required. So if there’s a mistake here, it’s in GarageBand’s actual code and how Apple is marketing the app, not how it was distributed. 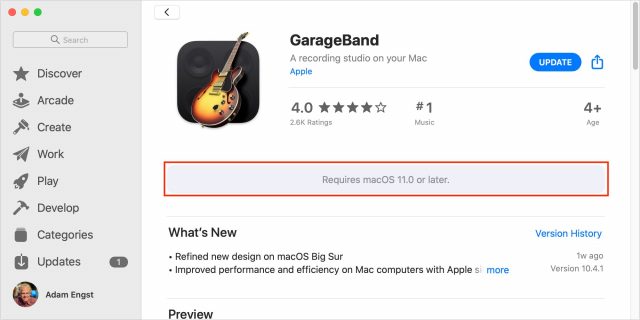 The practical upshot is that Mac users who are delaying the Big Sur upgrade as we—and most Apple consultants and admins—recommend will also see a badge on the Dock icon for the App Store app. Plus, clicking Update All will always result in that error about GarageBand requiring Big Sur unless you delete GarageBand from your Mac.

This is shoddy behavior on Apple’s part. That softwareupdate -ignore command should be given back to everyday users. The App Store app should reliably tell you when there are updates available for your Mac. Advertising an update that a Mac can’t install is at best unnecessary. Also, the App Store app used to let you ignore updates from a particular app, but that option disappeared at some point in the past few years.

We Don’t Need No Stinkin’ Badges!

With a nod to the famous paraphrase of a line of dialogue from the 1948 film The Treasure of Sierra Madre, “We don’t need no stinkin’ badges!”

Personally, I’m not all that bothered by the badges, but some people are, so here are three solutions: 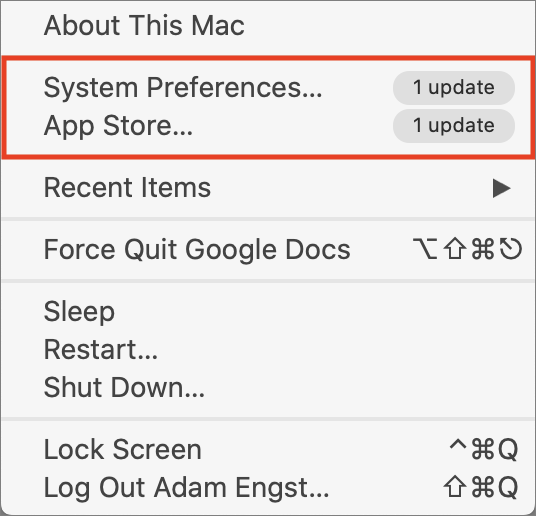 Here’s a look at how your Dock might look with the last two solutions.

Unfortunately, there’s currently no way to eliminate any of the notifications, App Store errors, Apple menu lozenges, or badges on the Software Update preference pane inside System Preferences. That’s too bad, and we’d like to see Apple give users back the option of ignoring both macOS updates and App Store updates.