CES traditionally kicks off with “Media Days” for reporters, including a round of press briefings. The Tech Trends to Watch overview of the coming year is the most consistently interesting: a mix of newsworthy data points, an unrelenting spin toward the positive, and inoffensive yet groan-worthy dad jokes. I’m not sure how much of that is due to the preferences of the presenters, Steve Koenig and Lesley Rohrbaugh from the Consumer Technology Association, or to mandates from CTA higher-ups. Still, it’s consistent, and what they choose to spin and the ways they do it are often the most revealing points in the presentation. I’m reporting my impressions of both what was said and how it was said, so as usual, this story is commentary and should not be attributed to CTA when I don’t specifically cite the presenters or include their slides.

Technology in the Time of COVID

They started spinning with a bang, with Koenig’s opening that technology saved a lot of lives during a challenging past year. That’s certainly true, insofar as all of medicine can be said to be either technological or reliant upon it. It’s a bit of a stretch to conflate that with the realm of consumer technology on display at CES. Better to say the obvious and unobjectionable: consumer technologies certainly made the pandemic and being cooped up at home more livable than was probably the case in 1918.

Koenig asserted that economic downturns and crises are both spurs to innovation, and he provided the following statistics: 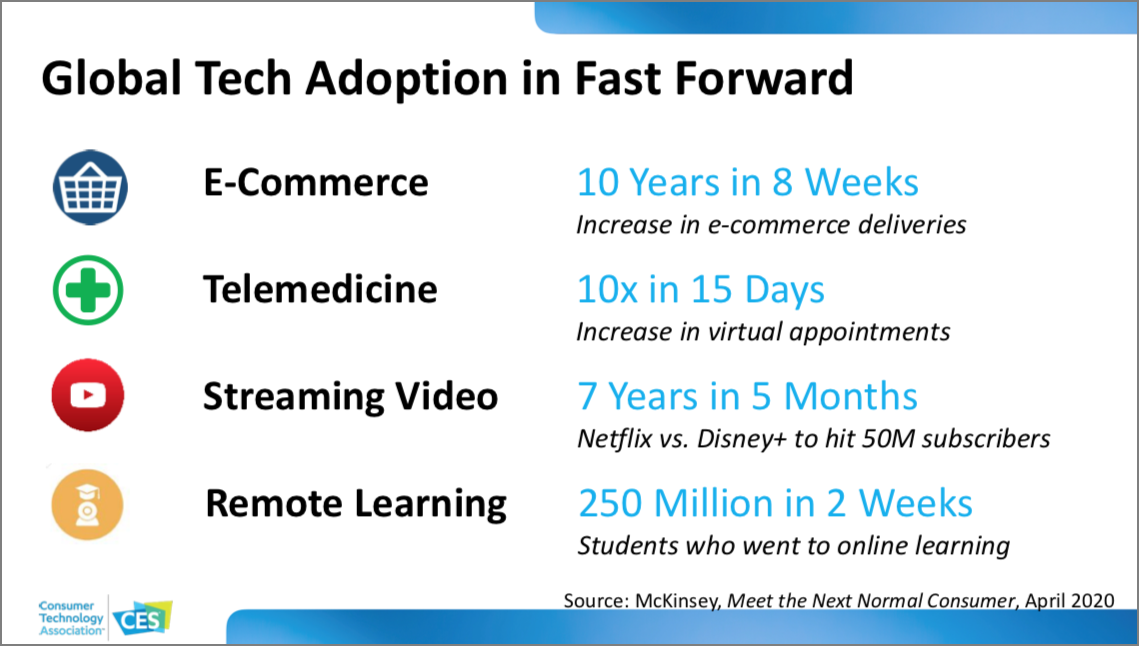 These adoption rates are impressive, and it’s true that what were originally likely to be multi-year trends were compressed in time and served up on the 2020 platter. But that’s not speaking to innovation as such. The companies and technologies that “won” the year were all in place in January 2020, and everyone who has school-age children (or knows someone who does) is aware that “adoption” and “smooth transition” are two different things. What I think will be fascinating to watch in 2021 as communities get vaccinated: how much we shift back to our 2019 habits, and how much of 2020’s migration to remote working and socially distanced everything will linger on as ongoing practices.

But not all is different. The key trends the CTA’s presenters defined for 2021 are remarkably similar to what they’ve highlighted in past shows: digital health, robots and drones, 5G, smart cars, smart cities, and something called “digital transformation,” which seems to include everything you’d rather not do online that you’re now doing online.

Digital health technology in 2021 is probably going to be a different market than it was going into 2020, if for no other reason than increased salience. There’s nothing quite like being secluded for a year by a deadly disease, with extra time to contemplate mortality, to make you interested in a wristwatch that tells you if your heart is working as expected. So I found Koenig’s and Rohrbaugh’s predictions of steady growth in end-user monitoring technology to be surprisingly pessimistic, with 34% growth in 2021 dropping to 14% in subsequent years. That said, it’s unclear whether these figures include multifunction technologies with health adjuncts, such as an Apple Watch, or if they include only devices that might be prescribed or suggested by a physician. 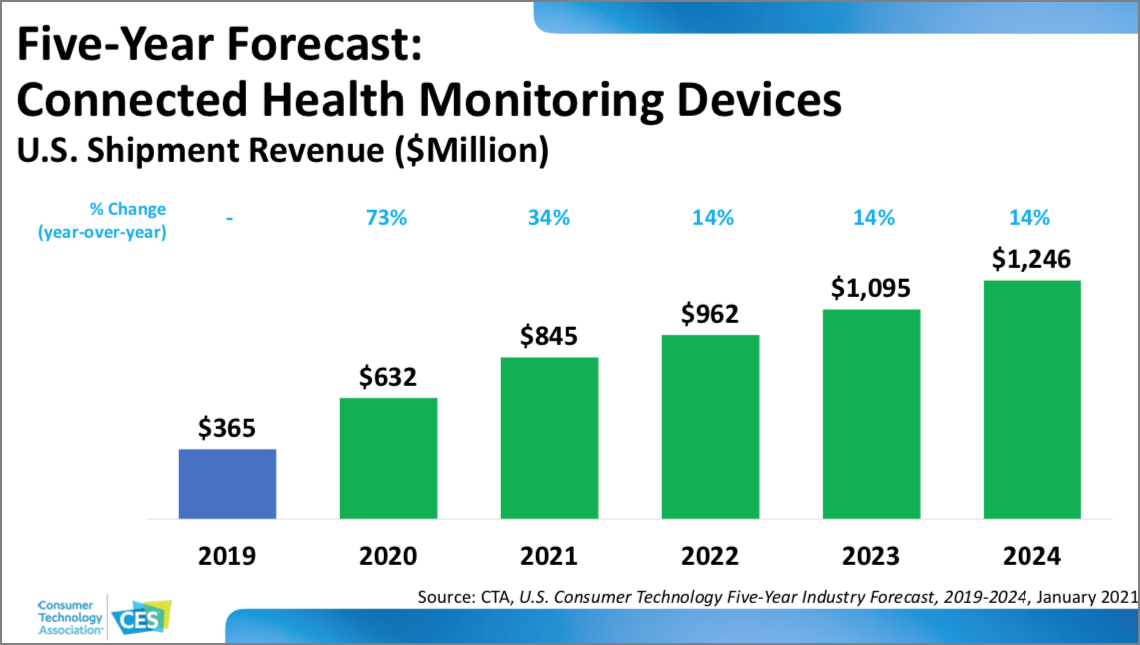 Rohrbaugh then focused on “digital therapeutics,” a category of hardware and apps that collect data and provide users with activities and strategies to manage illnesses or symptoms in real time. This field also includes connected gadgets that feed this data back to the user’s physician to adjust treatment and prescriptions for individualized care. She cited examples such as exercise programs for people with diabetes and virtual reality environments to aid in recovery from PTSD. If this category is new to you, expect to hear about it again: digital therapeutics are expected to be an $11.7 billion business by 2027.

Koenig then covered digital transformation, citing various ways businesses and consumers have had to change their strategies in response to COVID-19. One such change is that with fewer people in offices, it apparently made more sense to more heavily use virtual computing resources as well. 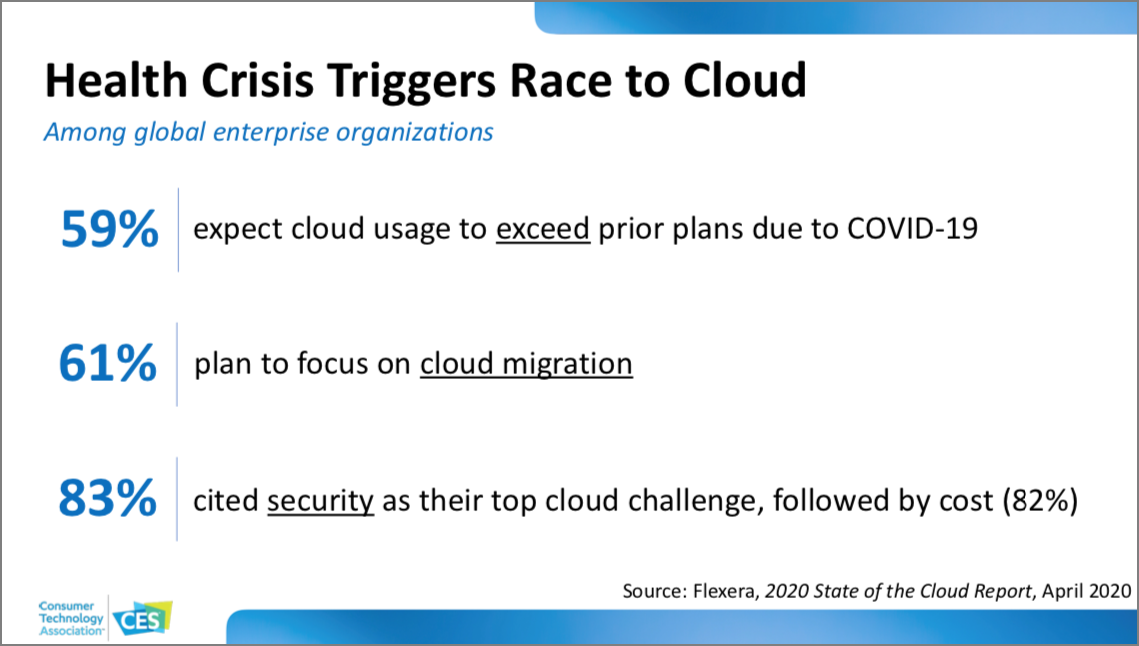 But what strikes me is that these are predictive numbers from last April, shortly after lockdowns started and when everyone was still a bit shocked. I would not be surprised if C-suite executives responding to an interviewer made statements like these to appear to be decisively reacting to events—and then discovered later how much organizational inertia was involved with the status quo. It’s much easier to add remote administration tools to an existing server than migrate to the cloud. So I’ll be curious to see if these numbers pan out.

In other areas, though, it’s clear that disruption was thorough: CTA says spending on digital fitness increased by a third as people stayed away from gyms, nearly the entire legal system figured out how to proceed using remote communications platforms, and as mentioned earlier, the same thing blindsided the educational system and caused massive change. Interestingly, CTA didn’t attach profitability numbers in the presentation to the legal or educational segments—perhaps because few audience members would see that as a positive development compared to the pain they’ve personally experienced?

Moving on to robotics, Rohrbaugh made the case that the robot revolution has happened, and we didn’t notice.

This slide was followed by another showing various autonomous ultraviolet disinfection robots, all emitting pretty shades of blue. It is totally believable to me that there has been a large shift in areas of the economy that aren’t directly facing consumers, because when UV robots are unleashed to clean a warehouse at 2 AM, there are no concerns about uncanny valley effects. I’m less certain about public-facing uses: in the digital health presentation, Rohrbaugh talked about using robots for incoming emergency room triage interviews or resulting telemedicine, and I think that might be one step too far for most people for a few more years.

It’s also likely going to be divided by sector. It’s one thing to have your online shopping delivered by a drone when that has a direct benefit to you, and it’s quite another when robots are performing security tasks. I think we’ll need many stories about robots saving lives to overcome the image of robots causing injury or death in a thousand movies.

5G and What It Means for Transportation

In vehicular tech, Koenig introduced an acronym new to me: C-V2X, which stands for cellular vehicles to everything. (Why not C-V2E? I wonder who workshopped that.) Essentially, this segment is very excited about aspects of 5G networks, such as low latency and always-on connections, that make new things possible in autonomous vehicle communications. The smarts of the system would be embedded in both the vehicles themselves and the surrounding environment, allowing each to manage what’s important.

An example that comes to my mind is the classic trolley problem with an autonomous car: if a child runs into the street and the AI has a choice of killing the child or killing the driver by swerving, what should it do? With robust communications, a curbside monitor could tell the car when it’s a block away, “there are children here, slow down,” and reduce the chance of this dilemma occurring in the first place. But the standards for this kind of communication are not yet in place, and Koenig described the current state of affairs as “in the starting blocks.”

As could easily have been predicted, CTA provided a new map of 5G implementation… 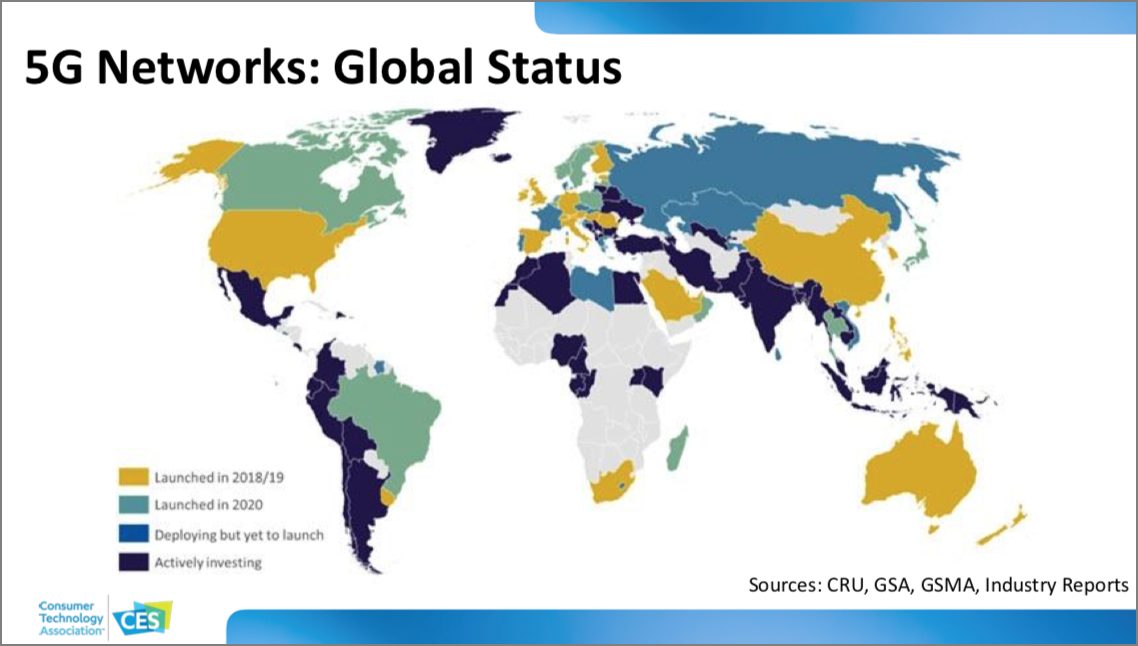 …which I take with a grain of salt because of the real-world distance between “launched in 2018” and “most people have a 5G phone with access to high-speed 5G service today.” Add to this the issue that, similar to electric vehicles, 5G has a problem with American population density not reflected on this map. (See “Understanding 5G, and Why It’s the Future (Not Present) for Mobile Communications,” 11 November 2020, and “The iPhone Gets 5G, but What’s It Like in Real-World Use?,” 19 November 2020.)

Electric vehicles won’t be widespread until you can drive as far on a charge as you can on a tank of gas, and there are charging stations wherever you might go. 5G has the same issue: covering the urbanized 83% of America still leaves one-sixth of the country by population, and the vast majority of it by land mass, served only by older technologies. It’s easy to envision that the busy Northeast Corridor of I-95 might be a smart, safer, and efficient roadway 10 years sooner than the smaller, transcontinental US Route 20—let alone the communities 30 miles from that road—with all the concerns that brings regarding increased economic disparities between urban and rural areas.

On the brighter side, Koenig said that by mid-decade, most countries will have some 5G infrastructure in place, and building out the system is expected to create 22.8 million jobs over the next 15 years. Verizon’s CEO calls 5G “the framework for the 21st century,” which sounds a bit overblown. Still, I have little doubt that there will be bedrock services that we take for granted in a decade that will require 5G as a prerequisite, much as satellites had to come before GPS.

Likewise, I think we may not be prepared for how much smart cities could impact our day-to-day lives. 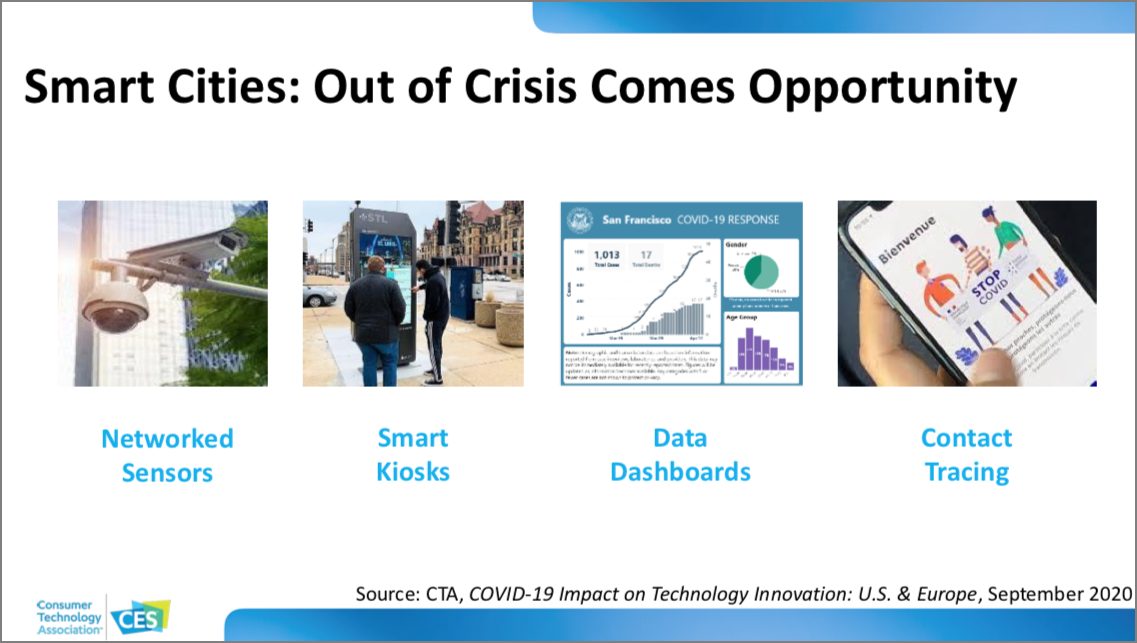 In this slide, it’s obvious why the presentation highlights COVID tracking as something that’s immediately salient. More interesting is the point that a smart city provides the infrastructure and tools urban managers can use to solve unanticipated problems rather than deploying one-off solutions for one-off problems. Smart city infrastructure lets well-governed communities make a partial transition from a bureaucratic to a technocratic model, using real-time data and evidence-based results to drive policy.

I’m unclear what the precise value of a smart kiosk is when we all have Internet-connected computers in our pockets that are already personalized to our needs, but I can think of a dozen ways that kiosk could handshake with our phones to provide us with live information about our surroundings. Right now, the most obvious of these are emergency and security information—and these were highlighted in the presentation—but I suspect that as with 5G, on a 20-year timeframe, there will be essential day-to-day urban services I can’t envision now.

Bringing us back to the present, Rohrbaugh went on to discuss smart building technologies that can be used alongside new social strategies to encourage a transition back to working in offices in conjunction with, as opposed to being replaced by, elaborate Zoom backgrounds that hide your messy living room. Alongside cleaning technologies, expect to see more voice-enabled and touchless interactive surfaces to prevent the spread of disease. I agree that there’s going to be substantial interest in this for 2021—but I wonder if the business community will have a problem similar to the one I have in deciding between an M1-based Mac mini or MacBook Air. How much longer will I be working from home, and how mobile do I expect to be afterward? The questions I need to answer for a thousand-dollar purchase also have to be answered for billion-dollar investments.

That said, while it’s nearly certain that only some parts of this presentation will ever come to pass—and that the technologies we get will undoubtedly be disappointing in ways the technologies we imagine are not—I’m looking forward to seeing what companies are presenting now in these categories. It’s not as good as being live in Las Vegas, but I’m glad CES didn’t skip a year.