The speakers in your iPhone or Mac likely sound weak compared to your stereo system. But how do you get the music from your device to those speakers? AirPlay is Apple’s super-cool technology that enables you to stream audio from an Apple device to your speakers over Wi-Fi. But the stereo system to which you’re streaming needs to support AirPlay for that to work.

One way to add music streaming support to such a system would be to upgrade its amplifier to one that supports AirPlay—something like this Denon DRA-800H. If you’re buying new, make sure you get one with AirPlay 2. But that’s a pricey solution for being able to play music wirelessly from your Apple devices through your best-sounding speakers.

A cheaper solution would be to use one of Apple’s now-obsolete AirPort Express base stations. It connects to your devices over Wi-Fi and to your stereo through a standard headphone jack. The second-generation AirPort Express 802.11n with the version 7.8 firmware update even supports AirPlay 2, but modern Macs, iPhones, and iPads can still stream even to older AirPort Express models that support only AirTunes, the audio-only predecessor to AirPlay. If you can find one, it will do the job quite well—you’ll just need a copy of AirPort Utility for macOS or iOS to configure it. In fact, I was using an AirPort Express for years, until it died a few months ago, leaving me scrambling for a new solution. I could have tried to replace it with another, but I recalled that I still had a second-generation Apple TV that could step into the breach. With a little effort, I got it working beautifully.

So if you’re interested in bringing your classic stereo system into the modern music streaming world without spending much, you could look for a used second-generation AirPort Express. Or you could do what I did, and press an old Apple TV into service. I did this because I had the Apple TV in the closet, making this project a fun alternative to an AirPort Express. I had even lost the Apple TV remote; I’ll explain briefly how to work around that problem in the steps below.

Here are the parts you will need:

Without further ado, here are the steps to AirPlay-enable your classic stereo system with an old Apple TV. First, let’s run through setting up the Apple TV, after which we’ll connect it to your stereo with the TOSLINK digital-to-analog converter. 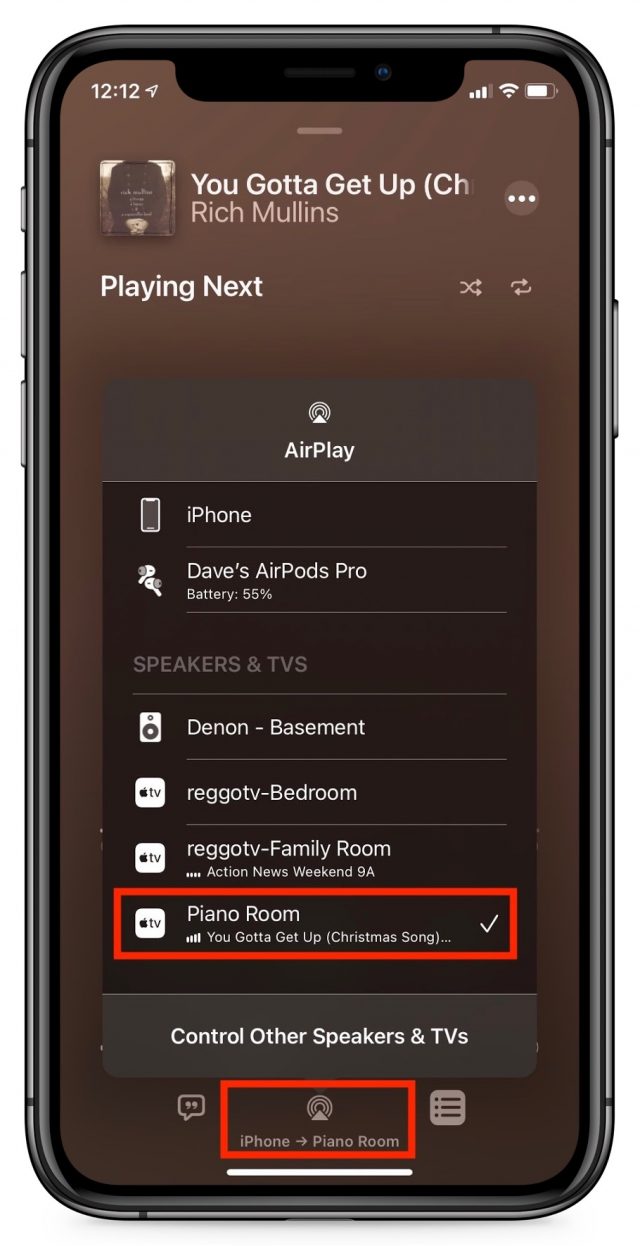 At this point, you should be all set to stream audio! Test to make sure AirPlay is working by trying to stream some audio from your iPhone to the TV your Apple TV is currently connected to. Open the Music app, play a song, tap the AirPlay icon, and tap your newly created AirPlay destination.#

If anything doesn’t work, back up and troubleshoot before proceeding. Once you unplug the Apple TV from the TV screen, it will be harder to troubleshoot.

Now we’re in the home stretch! Next, we’ll connect the Apple TV to your stereo in a few quick steps:

When you’re all done, your connections should look something like this photo. 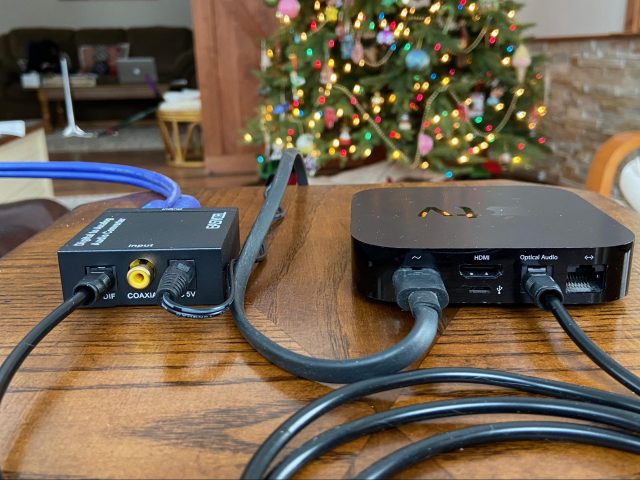 Finally, go back to the Music app and try the streaming test again, noting that you may have to reselect the AirPlay destination. (Remember that you should always start with the volume down low to prevent damage to your speakers and your ears.) You should hear your iPhone playing back through your stereo! This AirPlay destination will be visible everywhere on your Wi-Fi network, including all your iPhones, iPads, and Macs. Even guests will be able to use it if they have access to your Wi-Fi.

Given that we’re talking about older hardware, there are a few technical details that might raise additional questions.

Congratulations! For the price of a Secret Santa gift, you just modernized your old stereo, and now you and your family have a great new way to enjoy music in your home! Let us know in the comments how you make out with this or other creative AirPlay-related projects!