I’ve always been a little jealous of people who produce action videos of themselves running, skiing, biking, jumping out of airplanes—that sort of thing. Whenever I’ve tried to film my runs or bike rides with an iPhone, it hasn’t gone well. Either the video was just way too jerky, or it instantly became apparent that I’d need specialized gear to hold the iPhone. Or both.

So when I was offered the chance to test a review unit of the Insta360 ONE X2 steady cam, which is now available in an Apple Store bundle for $479.95, I jumped at the chance to see what I’d been missing. After just a couple of days, I’m nowhere near ready to review the ONE X2, but my first impressions are that the hardware is exceptionally competent, although I’ll need to spend more time learning the editing software.

The candy bar-sized ONE X2 is about the height of an original iPhone but only two-thirds its width and a little thicker, with bulging camera lenses on the front and back and a small, circular touch screen on the front. It took me a bit to find the power button on the right edge; I had fixated on the more-obvious shutter button on the front that both turns the ONE X2 on (if necessary) and starts recording in some mode that I could escape only by removing the battery from the left edge. Once I removed my glasses so I could read the tiny text in the minuscule Quickstart Guide (which has only seven 3-inch square pages in English), I realized my mistake. 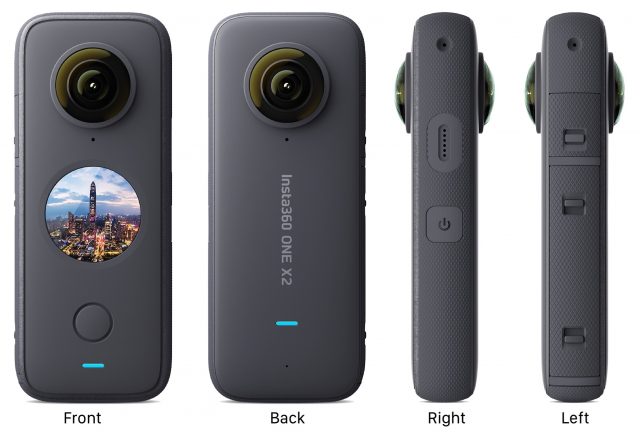 The battery and USB-C charging port covers are a bit tricky to take off and put back on because of the rubber seals that waterproof the ONE X2 down to a depth of up to 33 feet (10 m). (You can add a $79.99 Dive Case that protects it down to 45 meters.) The ONE X2 records to a MicroSD card that fits inside the battery compartment; getting it in is easy; getting it out is more challenging. A threaded mount on the bottom lets you attach it to a tripod or, more likely, the Invisible Selfie Stick accessory (there’s also a selfie stick/tripod combo and an extra-long version).

After familiarizing myself with the hardware, I downloaded the Insta360 app to my iPhone. Once paired with the ONE X2, the app functions as a sort of outboard brain, enabling you to control the X2 remotely and edit videos stored on the ONE X2 itself or downloaded to the iPhone. What I didn’t realize initially, and where the documentation could help a lot more, is that the Insta360 app also features a full set of video tutorials, including a tour of the hardware that would have saved me from my initial confusion about the shutter button. Oops. 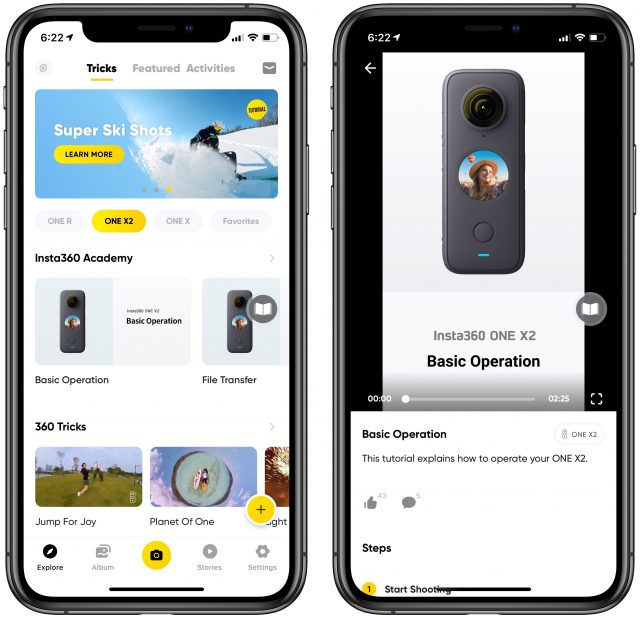 In fact, the Insta360 app bundles together all sorts of different features. Encapsulated in it is an entire social networking community surrounding the videos, so you can watch other people’s videos and post your own. You can follow people, like their posts, and participate in post-specific comment streams. There’s even a notification center that displays all the likes, comments, and follows you get, plus a full chat capability that the company also uses to alert you to new tutorials. But wait, there’s more! (A bit dizzying, I know.) The app rewards positive actions with Insta360 Gold—basically in-app currency worth 1¢ each—that you can redeem for discounts on ONE X2 accessories or for Apple or Google gift cards. Most amusing is that bad behavior in the comments is penalized by taking Gold back. 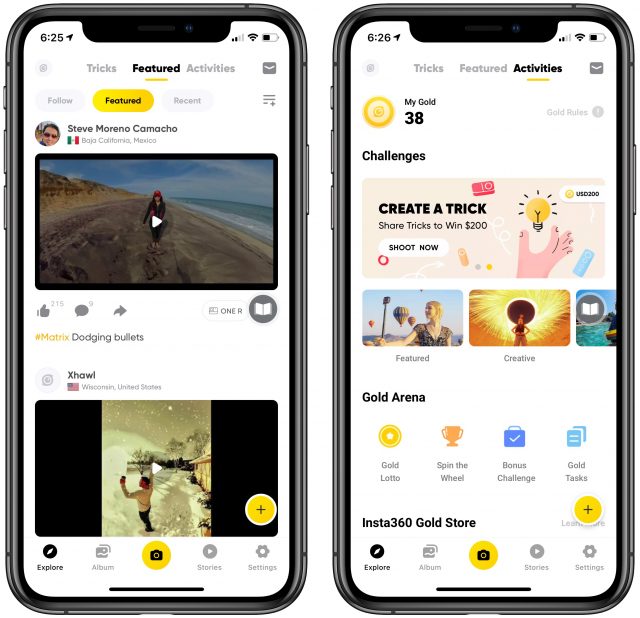 A problem I’ve faced when filming in the past is that I’m not great at framing shots, and I lack the patience and skills to record multiple videos and edit them together to show different camera angles. What I didn’t quite internalize about the ONE X2 at first is just how flexible 360º footage is. That’s right—the 360 in Insta360 refers to the fact that the ONE X2 uses both of its cameras to film 360º video in 5.7K at 30 frames per second.

So when it came time to take the ONE X2 out for a real-world test—some snowshoe running on a sunny day at the Cornell golf course—I attached it to the Invisible Selfie Stick, pressed the shutter button to start recording, and started running. Every so often, I’d stop and start again at logical points to reduce the need to extract footage from a long recording. But that was it—apart from having to hold the selfie stick out in front of me while running, which is a little awkward, I didn’t pay attention to anything else. The Invisible Selfie Stick is well named; the ONE X2 automatically edits it out of all footage, so all you’re left with is an occasionally odd arm position or the selfie stick’s shadow. Plus, the 360º filming means that where you hold the selfie stick isn’t all that important—the ONE X2 will always capture you.

When I got back home, I started fumbling through the Insta360 app’s editing features. I decided to focus on a clip of a descent from the golf course along a steep trail that we runners refer to as the “gorge” or the “gulch”—it ends with a hellaciously steep uphill (the “bowl”) that comes 1200 meters before the end of the cross country course. During the season, I often run hill repeats there, so I know the twists and turns and every change of incline like the back of my hand.

It took me some time to figure out how to trim bad bits off the start and end of the clip and then quite a bit longer to figure out that I had to add keyframes whenever I wanted to change the field of view. But once I did, what flexibility! At any moment during the video, while it was playing on my iPhone, I could swipe on the screen to have the camera look at me, ahead of me, up at the sky, or down at the ground. If I were more self-absorbed, I could have had the app track me automatically at all times. The footage was also quite smooth, considering how much I was moving the camera around while running. It wasn’t even easy to tell when I switched the selfie stick from one hand to the other while filming. This is computational photography at its best. 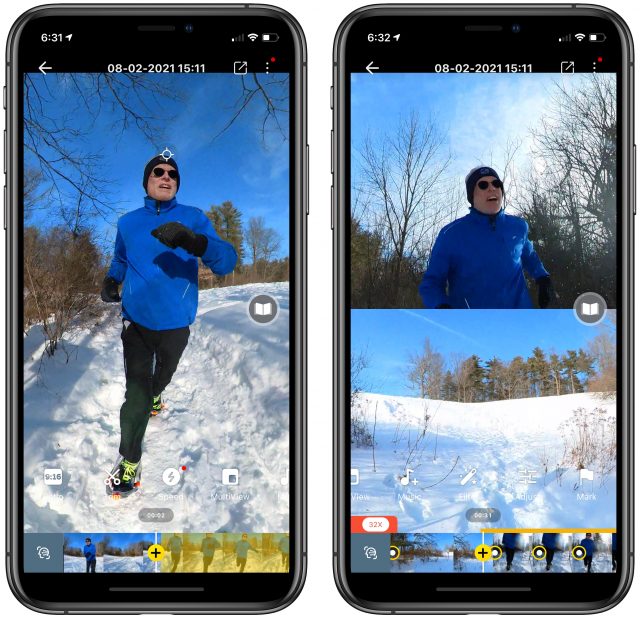 Of course, I thought the entire 4-minute clip was compelling (I’m at least that self-absorbed), but when Tonya watched it, she got bored quickly. So after the first 20 seconds or so, I increased the speed by 32x to zip through the parts of me just running along the packed-down trail in the snow until near the end. That was where I had to climb up out of the bowl, where the snow was deep and the hill was steep, and I couldn’t even maintain forward momentum, much less run the entire thing.

I was torn—I wanted to show how steep it was in front of me, but I figured that video of me struggling and even going down on a knee at one point was more interesting. Since the ONE X2 has two cameras, I realized I didn’t have to choose. The MultiView feature in the editor let me split the screen and show both views.

Once I had everything right, I exported my 1-minute video to Photos and used the YouTube iOS app to upload it. I won’t pretend it’s the most amazing video ever, and the quality on YouTube isn’t quite as clear as the original, but it will give you a sense of what a neophyte can do with the ONE X2 and the Insta360 app on his first try.

I’ve skipped over numerous features of the ONE X2 hardware and the Insta360 app since I haven’t had a chance to play with everything yet, and I’m still figuring out what a 360º camera coupled with powerful computational photography makes possible for both videos and photos. But after a slightly rocky start that could have been avoided with better getting started documentation for the complete novice, color me impressed with the Insta360 ONE X2. More experimentation is needed.