Here’s an unusual update. Apple has released macOS 11.2.2 Big Sur, saying that the update prevents MacBook Pro models from 2019 and later and MacBook Air models from 2020 and later from being damaged by “certain third-party, non-compliant, powered USB-C hubs and docks.” Apple lists no other changes, even security fixes. It’s a 2.17 GB download. 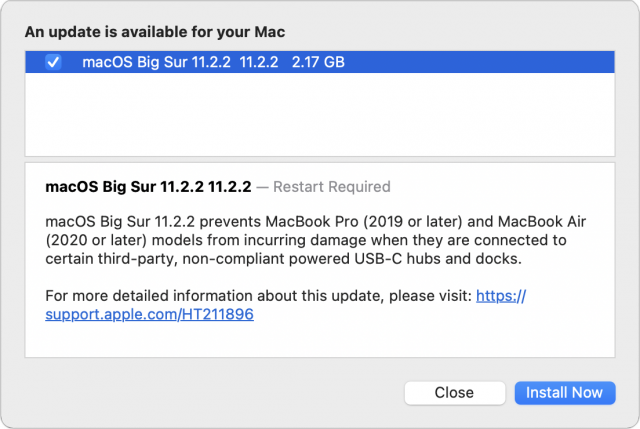 Apple makes no mention of a repair program, which implies that the company feels that any damage incurred is not its fault, although most of the bricked Macs appear to have been replaced under warranty or AppleCare.

Nor does Apple name names, so there’s no way to know which USB-C hubs and docks might be dangerous here. The general advice is with power-carrying accessories is to stick with well-known and reputable manufacturers. Although there’s no guarantee that they would have produced compliant peripherals, it’s probably easier to ask such companies if their products are compliant.

That said, a Reddit thread collects reports from people who have experienced problems with particular devices, including those from Dodocool, HyperDrive, Satechi, and ZMUIPNG. If you’re buying a USB-C hub or dock right now, it’s probably safest to avoid powered ones for the moment.

Our initial take is that Apple engineers have evaluated enough damaged Macs to understand the problem—presumably too much or dirty power—and realized that they could prevent the problem by adjusting how the Mac interacts with the powered hub or dock. Hence macOS 11.2.2.

If you’re running Big Sur on a recent MacBook Pro or MacBook Air and have a powered USB-C hub or dock, we recommend unplugging it immediately and installing this update before using it again. If you don’t have such a hub or dock, or are using a different Mac, there’s seemingly no reason to install this update. macOS 11.3 should be coming soon.

More concerning is what to do with a MacBook Pro or MacBook Air running an earlier version of macOS with a powered USB-C hub or dock. Perhaps Apple will release a supplemental update for 10.15 Catalina and 10.14 Mojave to address the problem. If that doesn’t materialize, we’ll never know if the problem was somehow specific to Big Sur or if Apple chose not to open the codebases for those older operating systems. Regardless, if you use a powered USB-C hub or dock with a recent MacBook Pro or MacBook Air, we recommend unplugging it and contacting the manufacturer to determine if it might cause this problem.