Much as I’m amazed by the performance of my M1-based MacBook Air, I miss MagSafe. And by MagSafe, I mean the original MagSafe charging plug technology that Apple introduced in 2006 on the first MacBook Pro. Inspired by magnetic power connectors in deep fryers and Japanese countertop cooking appliances, MagSafe made it trivially easy to plug and unplug the power connector.

The big win of the breakaway magnetic connector was that you couldn’t trip over a power cord and damage the power jack or pull the MacBook onto the floor. I can’t say if MagSafe ever saved me from such a calamity, but I appreciated using it for many years across several MacBook models. There was something so utterly satisfying about pushing the power plug toward the MagSafe jack and having it latch on with a solid thunk. Equally gratifying was being able to grab a MacBook off the desk with the merest wiggle to detach it from power.

The main complaint I ever heard about MagSafe came when Apple weakened the magnets in MagSafe 2. Several people accidentally disconnected the connector and pushed it up onto the MacBook just as they closed the screen onto it, breaking the screen. Andy Ihnatko also once complained to me that MagSafe connectors tended to get disconnected when working on soft surfaces like messy hotel beds. Regardless, MagSafe was justifiably popular with most people.

Apple’s desire to move to a single jack that could do double-duty for power and communications was the beginning of the end for MagSafe. USB-C offers those capabilities with a generally well-designed connector that is both slim and bidirectional. The only thing USB-C is not is magnetic.

Happily, Bloomberg’s Mark Gurman has published rumors suggesting that Apple plans to bring MagSafe-like charging back to the MacBook Pro line when it releases the next high-end models based on Apple silicon. But that won’t do those of us with an M1-based MacBook Air or MacBook Pro any good.

There is a fix for people like me, who don’t plan to buy a new MacBook Pro purely for a better charging experience. Thanks to Marc Zeedar, who recommended one of these products in TidBITS Talk, for turning me on to this product category.

Magnetic charging nubbins, which are readily available on Amazon from a variety of random Chinese manufacturers, have two parts. A tiny USB-C nubbin sticks out slightly from the side of the laptop, and an L-shaped magnetic connector connects to your existing USB-C charging cable on one side and grabs onto the nubbin with the other. 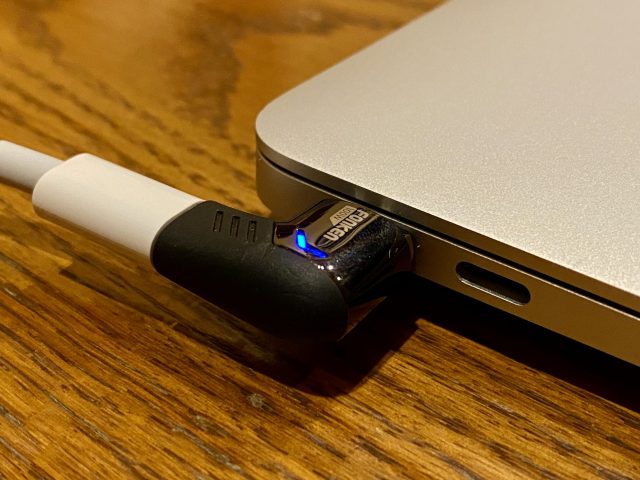 There are two types of these connectors for sale, those that support both power and 10 Gbps data transfer, and those that focus on charging, supporting just USB 2.0-level data transfer. I think relying on a magnetic connection for any data transfer is a terrible idea—it’s far too easy to disconnect accidentally. The data-focused magnetic nubbins are also quite a bit larger since they need more pins, so they may block two ports. I can’t recommend them.

However, for about $20, you can get a two-pack of the power-focused magnetic nubbins with support for up to 100-watt charging. Marc Zeedar recommended this set from Anmone, whereas I ended up buying a seemingly identical set from Fonken because they came in black and white instead of just black. (I thought the color difference might help distinguish between the charging cables for Tonya’s 2016 MacBook Pro and my M1-based MacBook Air.)

In real-world usage, the magnetic nubbins are as simple as I’ve described. I plugged the nubbin into one of the USB-C ports on my M1-based MacBook Air, plugged the L-shaped magnetic connector into my USB-C charging cable, and then slapped the two together to make a charging connection. A little blue LED illuminated to show the connection had been made correctly, and the MacBook Air made its happy little bong noise to indicate it was slurping down power. Disconnecting from power was just as easy as it ever was with the old MagSafe—I just hold the power connector down as I pick up the MacBook Air. Check out my quick video to see it in action.

In all honesty, the user experience with the magnetic nubbin isn’t as good as Apple’s MagSafe. Either the magnets aren’t quite as strong, or the “outie” design of the magnetic nubbin means that it’s more readily subjected to shearing forces that break the connection. The old MagSafe ports were “innies,” which made their connections a bit more secure. The other problem is that the standard Apple USB-C charging cable is thicker and less flexible than the old MagSafe charging cable. That makes it a little harder to connect successfully since the magnetic connector has to align perfectly with the nubbin, and it’s more likely to be disconnected by movement. 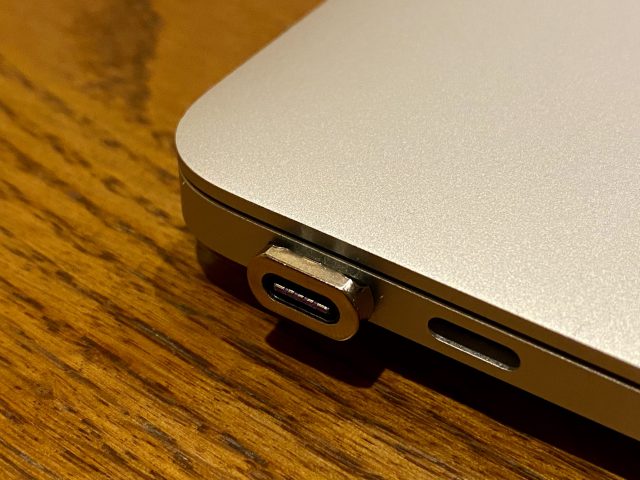 Another slight downside is that the nubbin is small enough that it’s a touch tricky to extract from the USB-C port if you need the port for something else. It’s not that hard, but it can be a little frustrating if you just cut your fingernails. I also wouldn’t be surprised if some percentage of them broke—for $10 each, I don’t expect high-end manufacturing.

Finally, some have noted that only one side of the L-shaped adapter has an LED, rendering it harder to determine if it’s connected when the LED is facing down. While I understand the criticism, I consider it more of a feature than a bug, since there are times—hotel rooms while traveling, notably—when I cover overly bright LEDs with carefully placed socks.

All that said, after a few weeks of usage, Tonya and I are happy with the magnetic charging nubbins on both of our laptops. If you’ve been missing MagSafe as well, I think they’re worthwhile, given how inexpensive they are.

Comments About Are Cheap MagSafe-Like Adapters for USB-C Worthwhile?