In a Hacker News thread about Dustin Curtis’s locked Apple ID (see “The Mystery of Dustin Curtis’s Locked Apple ID,” 5 March 2021), there were several reports of iMessage accounts being disabled after other users inadvertently marked messages from them as spam during deletion (swipe left on a message and then tap the trash icon). 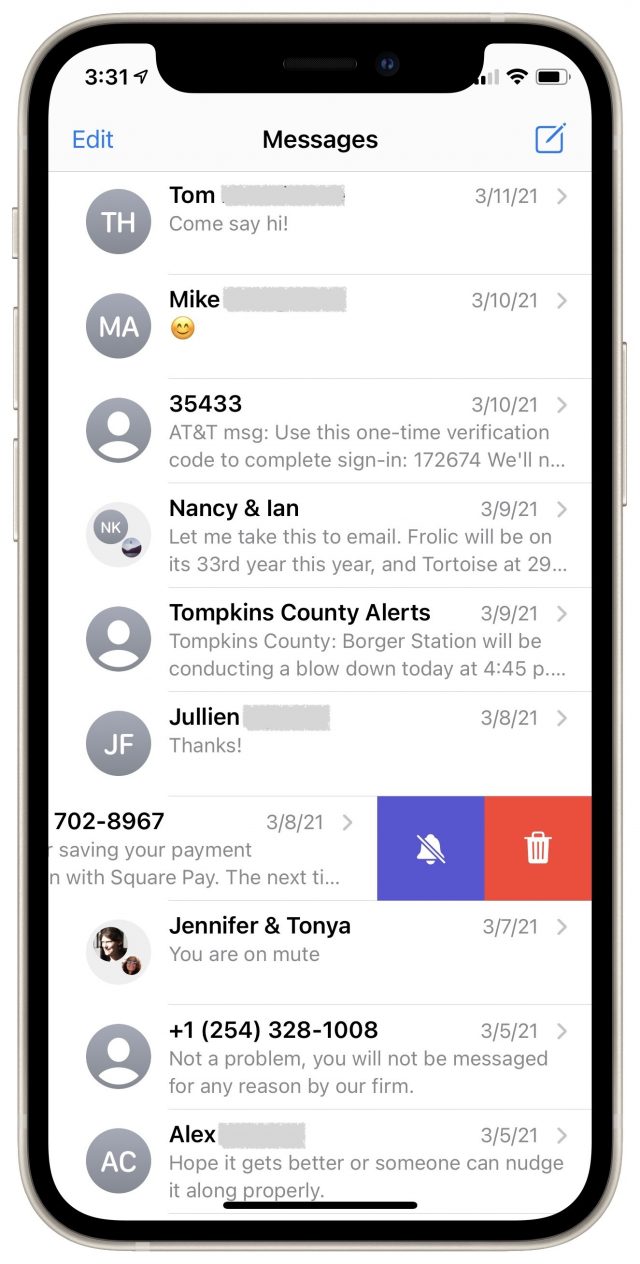 There’s a UX defect with Messages right now where if you delete some conversations in succession, randomly will a modal popup [sic] and ask you if you want to report the contact as spam.

Some Apple articles will tell you not to worry if you’ve accidentally reported someone as spam, but it actually does something. It’s not a pedestrian crosswalk button.

I found this out the hard way when my wife could no longer send or receive messages nor sign into Messages and we had to contact Apple support. I’ve accidentally reported tons of people as spam because of this stupid Messages experience, and I can only guess that I’ve reported my own wife so many times from clearing all of my Messages conversations that they disabled her Messages account.

He eventually got his wife’s iMessage access restored after Apple Support granted a “one-time exception.”

What a coincidence. My wife had the same issue a few months ago. It started with her not being able to send or receive iMessages.

The worst part was that there was no notification nor warning. Some of her friends actually thought that she was mad at them for some reason as they would send her messages and she according to them would not respond at all.

From her perspective though she was responding to every message but they never got them.

He also got her iMessage access restored with another “one-time exception.”

We haven’t seen other reports of this, and we can’t replicate the behavior, so it’s likely a rare issue. Regardless, be aware of the possibility. The spam-reporting prompt seems to appear only when you delete an entire conversation or delete several messages from a single conversation. If you regularly delete messages or conversations in Messages, read the prompts carefully before responding to them.

It’s not unreasonable that Apple would use the reports of spam messages to protect other users from spammers. However, it does open the door to abuse by users who would intentionally mark messages from others as spam to disable their accounts. That could happen only between people who have exchanged a sufficient number of messages, but it’s not hard to imagine it occurring in an unpleasant divorce or with a disgruntled housemate. Let us know in the comments if you’ve seen the spam-reporting prompts or if you or someone you know has had their iMessage account suspended by Apple.

Comments About Be Careful When Deleting Conversations in Messages