Given the astonishing performance of the M1 chip, it can be hard to remember that Apple sees it as powering the low end of the Mac line. That’s why the company introduced it in the MacBook Air and low-end MacBook Pro and Mac mini, leaving the higher-end models of the latter two powered by Intel chips. Continuing the M1’s takeover of the Mac line from the bottom up, Apple has now unveiled an all-new 24-inch iMac powered by the M1, replacing the 21.5-inch iMac with 4K Retina display. The Intel-based 27-inch iMac with 5K Retina display remains available, although we expect Apple to replace it with an Apple silicon version soon enough, perhaps within the year.

Whereas the previous M1-based Macs differed from their predecessors purely by their internals, the new 24-inch iMac marks Apple’s first major redesign since 2012, or, arguably, the most significant one since the screen-first design replaced the “desk lamp” design in 2004. The new look resembles a 24-inch iPad Pro clipped to an aluminum stand, available in seven colors: blue, green, pink, silver, yellow, orange, and purple.

What’s not quite clear from the picture above is that the front of the iMac features a muted color and gray bezels, whereas the back is a bolder, brighter version of the color. As Apple said, the back of the iMac is on display in many situations, and the company wants it to look as attractive as possible. If you don’t like the colors, just get the silver model.

There’s apparently a single sheet of glass over the entire front. We’ll see what iFixit says in a teardown, but I’m not betting on these iMacs being easy to disassemble. Admittedly, although repair will always be necessary to recover from accidents, there’s nothing to upgrade inside, given that everything is on the motherboard.

Apple also sells a version with a built-in VESA mount adapter instead of the stand.

The 23.5-inch (diagonal) screen, which includes the brains of the iMac, is only 11.5 mm thick, a feat that’s made possible by the M1 chip’s significantly reduced cooling needs and Apple externalizing the power supply. Apple claims the fans in the 24-inch iMac won’t get above 10 decibels, which is barely noticeable.

What about the screen? It’s a 4.5K Retina display with a 4480-by-2520 resolution at 218 pixels per inch. It has 500 nits of brightness, support for 1 billion colors, and supports both P3 wide color and Apple’s True Tone technology. Sadly, Apple did not introduce a low-cost (or even reasonably priced) external display. Still, the 24-inch iMac can drive a single external display at up to 6K resolution, meaning Apple’s insanely expensive $6000 Pro Display XDR.

In the introduction, Apple focused a lot of attention on the fact that the 24-inch iMac now features a 1080p FaceTime HD camera backed by the M1 image signal processor. That should provide radically better videoconferencing quality. Alas, it doesn’t provide Face ID authentication. Also welcome for videoconferencing is the new six-speaker sound system with force-canceling woofers and the studio-quality three-mic array with directional beamforming. Apple promises that the mic array will home in on your voice and ignore other sounds in your environment. 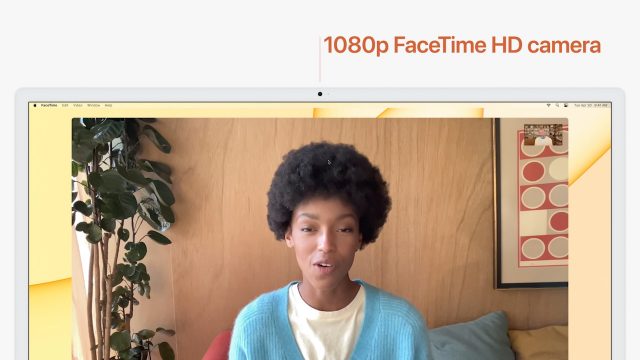 Reach Out and Touch New Keyboards

Apple matched the colorful new iMacs with new input accessories as well. The new Magic Keyboard includes special keys for Spotlight, Dictation, Do Not Disturb, Lock, and Emoji. The arrow key arrangement is poor, but let’s hope Apple is using a good switch mechanism under the keys. 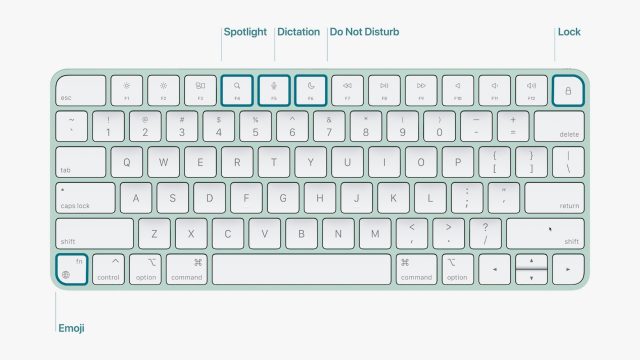 The Magic Keyboard with Touch ID is even more notable since it’s the first time Apple has separated the Touch ID sensor (in the upper-right corner) from the Mac, iPhone, or iPad that it unlocks. Apple claims that the wireless communication with the Secure Enclave in the M1 chip is secure, and I’m sure the engineers put a great deal of work into it.

For those who need their keypads, Apple also has a new Magic Keyboard with Touch ID and Numeric Keypad. To match the new keyboards, the company also introduced new color-coordinated models of the Magic Mouse and Magic Trackpad. It’s not clear how different these are from the existing models that will undoubtedly continue to ship with other Macs, but it’s likely that Apple will eventually pare the accessory line down to these new devices.

Unsurprisingly, Apple made a big deal out of how much faster the 24-inch iMac is than the 21.5-inch iMac that it replaces. Whatever—we assume it will perform much like the M1 Mac mini. All you need to know is that it uses the same 8-core M1 chip that has given the other M1-based Macs stellar performance thanks to four performance cores and four efficiency cores. There are 7-core and 8-core GPU models, as before, and it’s likely that the 7-core models are 8-core units that failed testing, although we haven’t heard any complaints about 7-core GPUs in the previous M1-based Macs.

8 GB of unified memory is standard, though you can order the iMac with 16 GB, which seems like a good idea given that the memory can’t be upgraded later. Still, unified memory is accessed differently (and much more quickly) than traditional RAM architectures, so perhaps 8 GB is sufficient for non-intensive uses.

In terms of wireless and wired connectivity, the 24-inch iMac includes 802.11ax Wi-Fi 6 and Bluetooth 5.0. Gigabit Ethernet is available but not standard on all models, and to reduce cable clutter, Apple built the Gigabit Ethernet port into the external power adapter. The power brick attaches to the iMac using a new custom magnetic connector on the end of a woven, color-matched cable. Finally, there’s a 3.5 mm headphone jack, nicely positioned on the side.

Much like the other M1-based Macs, the 24-inch iMac comes in two basic configurations:

Apple is making the 24-inch iMac available for pre-order on 30 April 2021, with delivery promised for the second half of May. Because the online store pages aren’t yet available, I can’t provide prices on the build-to-order options. However, based on other models, I’d guess along the following lines:

Overall, the new 24-inch iMac is a tremendously compelling machine. As with the previous M1-based Macs, it’s the low end of the iMac lineup, but that’s fine. There’s plenty of demand for a svelte, attractive iMac in kitchens, bedrooms, and dorm rooms. Apart from the base M1 performance, it may not have pro-level specs, but it’s not pretending to. More so than any Mac Apple has sold since the original gumdrop iMacs from 1998 through 2002, these new 24-inch iMacs are built for the home.