In retrospect, I had been feeling unreasonably chilly all day, and my evening run with friends was a struggle. I attributed my sluggishness and muscle pain to the previous day’s speed workout, but shortly after finishing, I started to ache all over and shiver uncontrollably. Our traditional pizza and cider weren’t going to happen, so we made our apologies, and Tonya drove me home. After a shower, I went straight to bed, where my fever spiked and I slept poorly. By morning, the fever had receded and I felt drained but otherwise reasonable.

I’m fully vaccinated against the coronavirus (as are 64% of adults in Tompkins County) and haven’t interacted with unvaccinated people indoors recently, if at all. Nevertheless, it was impossible to ignore the possibility—however low—that I had suffered a breakthrough case of COVID-19. Some research revealed that several rapid antigen tests for COVID-19 are now available, and an MIT Technology Review comparison pushed me toward the Ellume test, available in the US for about $40 at CVS drugstores and online from CVS.com. 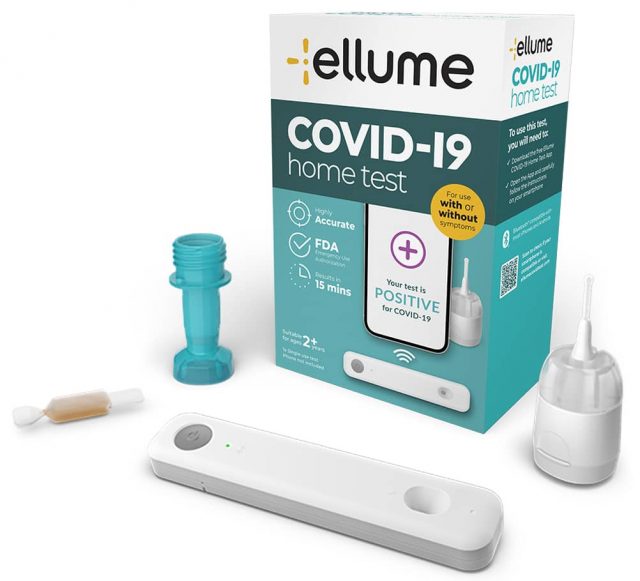 Now, I know you might expect TidBITS to cover computer viruses and anti-malware apps, but coronaviruses and COVID-19 tests? What struck me about the Ellume test was just how high-tech it was, and the company did a good job of employing that technology to make the somewhat complicated process more straightforward. Plus, the results went straight to my iPhone—no need to squint at a faint colored line to see if I was pregnant sick. (The competing BinaxNOW Self Test doesn’t appear to provide as much guidance and relies on the colored line approach.)

It was a fascinating experience. Downloading the app felt a little unnecessary at first, but given all the parts and pieces of the kit, I appreciated how it walked me through the process. In fact, it forces you to watch a video that explains the entire process, emphasizing that you should not try to perform the test while watching. The step-by-step instructions come next and are wonderfully clear and concise, with additional tips and warnings sprinkled throughout.

In essence, you put some liquid in a custom dropper, use a custom nasal swab to swab the inside of both nostrils (uncomfortable but not painful), and then screw the swab into the dropper. Next comes the Analyzer, which you pair to your iPhone using Bluetooth by holding down a button on one end. Then you carefully squeeze five drops from the dropper—which has internally mixed with the swab—into a hole on the other side of the Analyzer. Let the app work for 15 minutes without interruption for your result.

My test was negative, thank goodness, and two days later, I felt fine.

Pros of the Ellume test include:

There are cons as well: 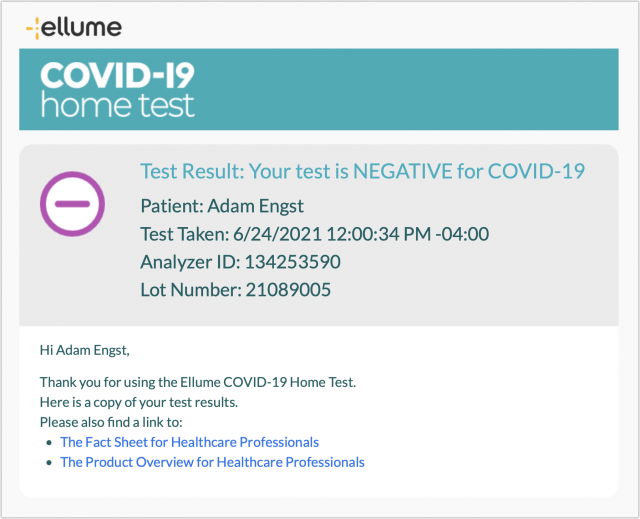 Given that breakthrough infections are happening, particularly with the Delta variant, I think there will be a role for at-home rapid testing for some time yet. It’s not that breakthrough infections are likely, but we’ve spent so much time worrying about COVID-19 for the past 15 months that any viral infection with similar symptoms will immediately cause concern. Given that the gold-standard PCR tests take a day or two to return results (and may require self-quarantining in the meantime), I plan to keep an Ellume test handy, just for peace of mind.

Besides, I already have the app installed.

More generally, I could see a bright future for in-home test kits. Ellume has developed a single-use flu test that sounds similar to the COVID-19 Home Test. The flu isn’t as contagious or dangerous as COVID-19, but the virus—often abetted by opportunistic secondary infections—can be deadly. Even when it’s not, it can lay out a healthy person for weeks and require months of recovery. The last time I had it, I felt terrible for two weeks and couldn’t kick the cough and fatigue for almost a month. TidBITS contributor Glenn Fleishman had a four-month recovery after contracting the nasty 2017–2018 flu season variant. Being able to identify a flu infection quickly without having to get to a doctor might be welcome for short-term planning and for requesting a Tamiflu prescription.

Ideally, such test kits wouldn’t be single-use. Security Editor Rich Mogull, who is also a paramedic, told me that the problem with multiple-use tests is contamination, both from previous tests and exposure to the environment. To prevent that, every piece of the Ellume kit came packaged in a separate mylar wrapper, and the instructions say not to open them until you’re ready to perform the test. When you’re done, there’s nothing to do with the plastic parts but recycle or trash them. It’s hard to know which is better, given the plastic industry’s decades-long campaign to convince us that recycling is economically feasible, something that has apparently never been true. It’s just offensive, though I suppose less so than many other modern products (I saw the plastic parts of a microwave dinner for the first time recently—insane).

I’ll bet plenty of people would pay for a home testing device that could detect multiple diseases. Some quick searching shows that these sort of things do exist, but they’re like the minicomputers of yesteryear in size and price. Even this “compact multiparametric immunoanalyzer” weighs 88 pounds (40 kg) and costs almost $15,000 refurbished.

I’m as far as it gets from an expert in this field, but Ellume has shown infectious disease testing can be brought to the home, and my money is on the tech world making this possible within my lifetime. And if I’m wrong, I’ll be dead and won’t care.