One of the more mysterious aspects of using multiple Apple devices comes when you connect an iPhone, iPad, or iPod touch to a Mac and are greeted with a dialog from an app called MobileDeviceUpdater telling you, “A software update is required to connect to iPad.”

It’s responding to your device having a newer version of its operating system than the Mac recognizes, so it’s most likely to happen after you update your device. The Learn More button leads to an Apple support page, but it’s not all that informative, saying mostly that the software update is necessary for your Mac to talk to the device.

In what seems to be an effort to reduce the confusion level—that MobileDeviceUpdater dialog must have caused innumerable support calls from people worried about malware—Apple is now offering the update via Software Update. No longer do you have to wait until you plug in an iPhone, iPad, or iPod touch to get the Device Support Update (as we now know it’s called). 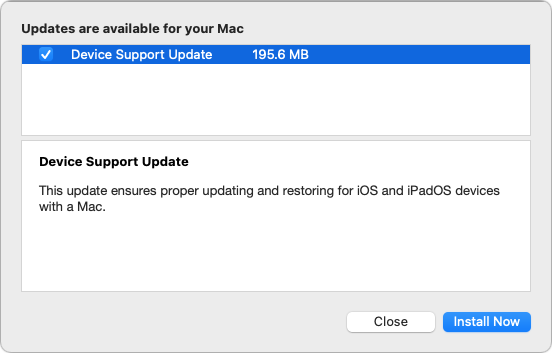 I’ve been sitting on that update for a week or two now since I wanted to verify what it was. I got that chance today when I plugged in my iPad Pro and got the usual MobileDeviceUpdater dialog. I made sure that Software Update was still offering me Device Support Update, and then I allowed the MobileDeviceUpdater dialog to update my Mac. After closing and reopening Software Update, the Device Support Update option was gone, confirming that they’re one and the same.

I realize this is far from an earth-shattering discovery, but it’s nice to know for sure what will happen when installing the Device Support Update from Software Update. It doesn’t require a reboot, and there’s no worry if you don’t get around to it because MobileDeviceUpdater will do its thing the next time you plug in your device.