We recently explored FaceTime’s flashiest new features (see “How to Use FaceTime Screen Sharing and SharePlay,” 8 November 2021). Now it’s time to take a look at a few practical new features that make FaceTime much more useful in iOS 15, iPadOS 15, and macOS 12 Monterey.

Previously, FaceTime worked just like a traditional phone call, which was intuitive but made FaceTime calls difficult to schedule and manage. After Zoom exploded in popularity during the early days of the pandemic, it became obvious that the capability to create a link to an upcoming video conference was indispensable. It took Apple long enough, but the company has finally copied that feature. Advantages to FaceTime links include:

Links may be the best new feature of FaceTime because they make scheduling calls and swapping devices so much easier. You no longer have to call back in and hope it works; you just use a link to return to the call.

The Create Link button is impossible to miss in the FaceTime app in iOS 15, iPadOS 15, and macOS 12 Monterey—it’s right there on the main screen. Tap it in iOS or iPadOS to reveal a share sheet, from which you can share or copy the link. Click it in macOS to reveal a menu with similar options.

Whenever you share or copy that link, the link is registered in FaceTime and appears under Upcoming either on the main screen or sidebar, depending on the platform. Tap the call to join it or click or tap the “i” button to see options to re-share or delete the link. 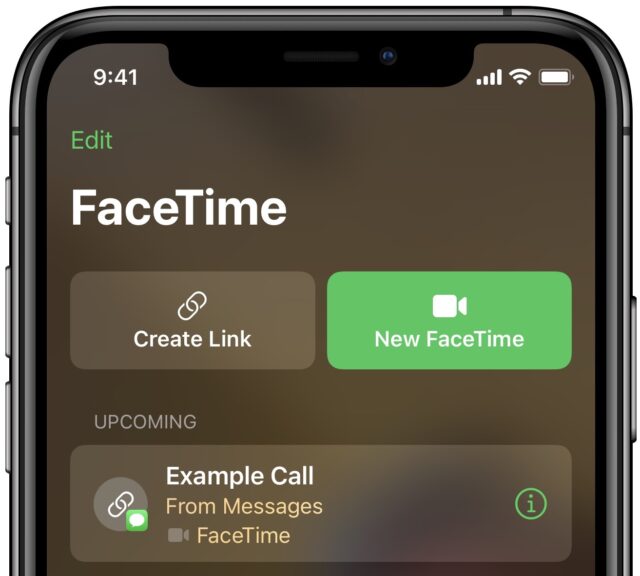 What recipients see depends on their platform. If you share the FaceTime link over iMessage to someone running iOS 15, iPadOS 15, or Monterey, it will show up for them in the Messages conversation and appear under Upcoming in FaceTime. Either way, they’ll see a Join button they can tap or click to join the call.

As with Zoom and other platforms, when you follow a FaceTime link, you’re first taken to a preview window that gives you an opportunity to tweak your camera and microphone settings. When you’re ready to join the call, hit the Join button. Once you do that, the person who originated the call must approve your request to join. 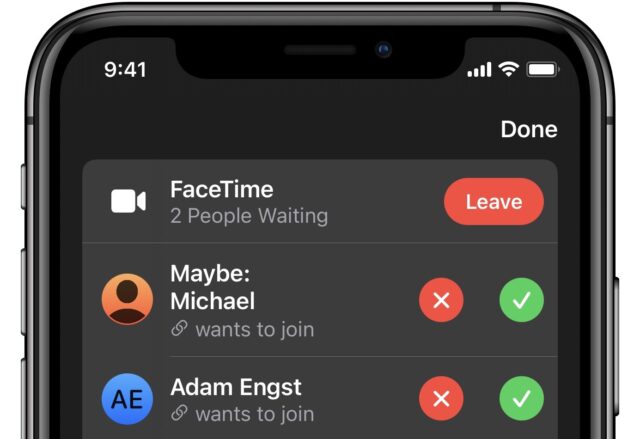 You can also create FaceTime links in the Calendar app. When creating an event, tap the second field down, labeled Location or Video Call (below left). Tap FaceTime (below center). Tap Add when you’re finished setting up the calendar event. The process is essentially the same in the Calendar app in Monterey. When you open the event on a compatible operating system, you’ll see a Join button (below right). On other operating systems, you’ll see a link that will open a Web instance of FaceTime. 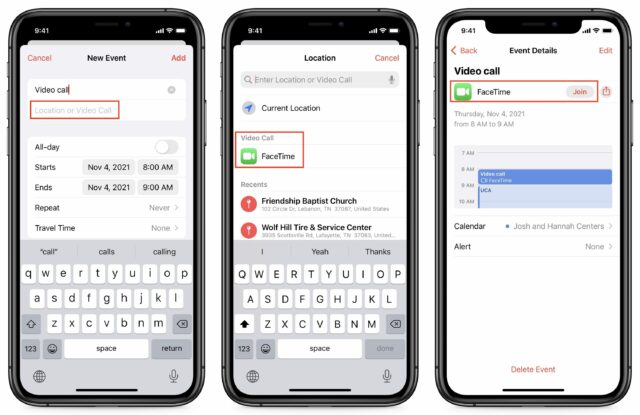 Putting FaceTime links into calendar events is a good way to ensure you can join from whatever device you’re using. If you’re working with a shared calendar, it also ensures that anyone else with access to that calendar can easily join the call.

Users on an iPhone or iPad with an A12 Bionic or later (including the M1 chip) have access to a couple of new machine learning-powered microphone modes that tweak your outgoing sound:

Of course, there’s also the Standard microphone mode, which doesn’t apply any machine learning to the audio.

To switch between these modes in iOS and iPadOS, open Control Center, which should have a Mic Mode button at the top. Tap it to choose a mode. 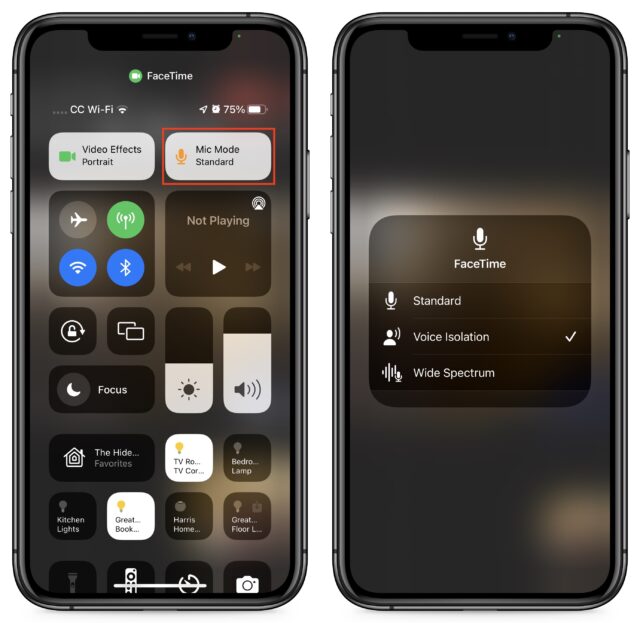 The interface to switch between mic modes works exactly the same in Monterey’s Control Center, but the feature is available only if you’re using an M1-based Mac.

Notice that Video Effects button in the screenshots above? Portrait mode from the Camera app is now available in FaceTime (and we wonder what other effects might appear in the future). As in the Camera app, Portrait mode applies a bokeh effect, keeping your face in focus while blurring the background. It’s a far cry from Zoom’s customizable and immersive backgrounds, but it helps blur the clutter behind you. And as with mic modes, Portrait mode requires an A12 Bionic, M1, or greater on an iPhone or iPad, or an M1-based Mac.

In iOS and iPadOS, there are two ways to activate Portrait mode:

In Monterey, the same two approaches work. You can turn Portrait mode on in Control Center by clicking Video Effects, or you can click a tiny Portrait mode button on your thumbnail in the lower-right corner.

Are you tired of video windows moving around the screen when you’re in a Group FaceTime call? Why can’t FaceTime simply display those windows in a grid and highlight the person who is speaking, like every other video conferencing app? At long last, it’s possible if there are four or more video participants in the call. Once you’ve enabled it for one call, it remains on for subsequent calls unless you turn it off.

Once four or more participants are in a call, a Grid button appears in the FaceTime controls. In macOS, there’s an always-visible Grid button in the upper-right corner. 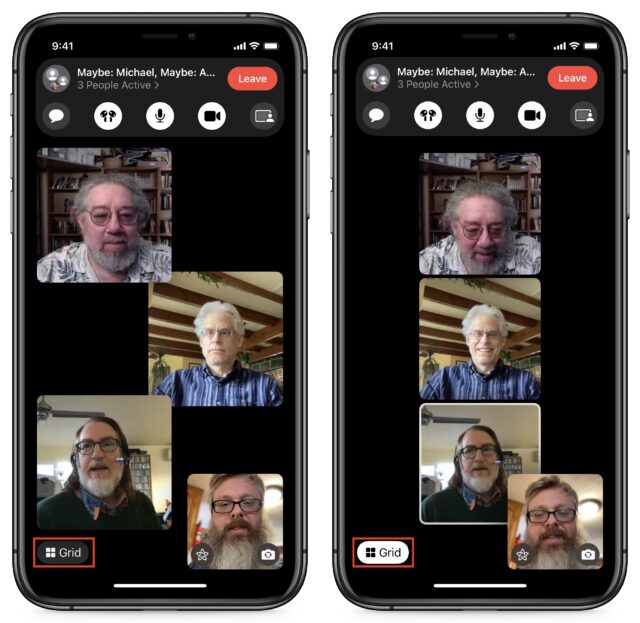 FaceTime on the Web

In what may be its most important new feature, FaceTime finally works across platforms. If someone on an older Apple operating system or a non-Apple operating system clicks a FaceTime link, it opens the FaceTime Web app in their default browser. Apple says that FaceTime works in Google Chrome on Android or Windows, and I found that it also works in the Chrome-based Brave. It does not work in Firefox.

Apple says nothing about Linux support, but we found that it functioned flawlessly on my 2011 Lenovo ThinkPad T420. That’s despite decade-old hardware and an outdated version of Brave—most impressive!

FaceTime on the Web works pretty much as it does on a Mac, iPhone, or iPad. You don’t get the fancier features like mic modes or Portrait mode, but Grid View is an option if there are four or more participants. You can click the ellipsis button in the FaceTime controls to change camera and microphone settings.

In short, Apple is happy to let non-Apple users participate in calls created by Apple customers, but it isn’t interested in providing free services to those who haven’t bought Apple devices.