After a quick observation about how Apple is making our devices ever more personal, it’s time to delve into a topic I find irritatingly opaque—variability in drivers for the same printer. A reader had trouble with color saturation with AirPrint drivers, and I’ve had issues with jobs using an AirPrint driver failing to print. 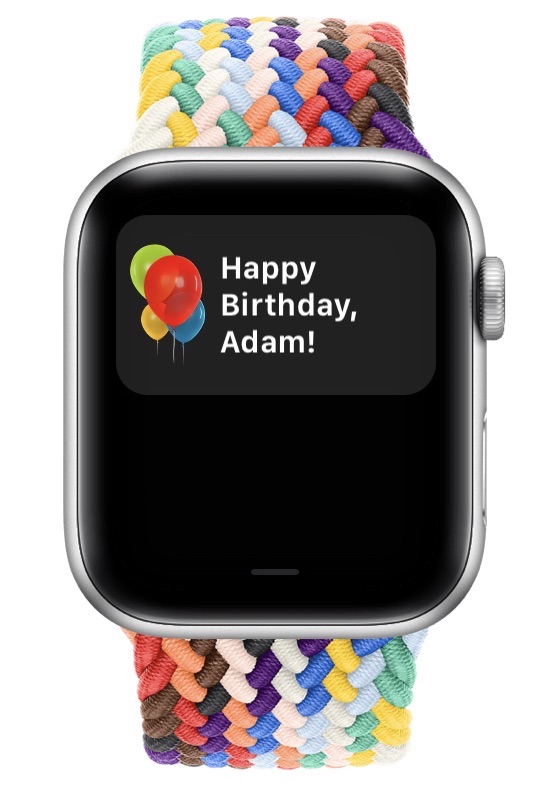 My birthday rolled around recently, and I was tickled to get celebratory balloons on my Apple Watch that morning. I can’t say for sure that this feature is new to watchOS 8, but I don’t remember my Apple Watch ever wishing me a happy birthday before. It was a nice touch, and it was somehow appropriate that it appeared only on my wrist, given that the Apple Watch is the Apple device that’s closest to my body throughout the day.

TidBITS reader Charles Reeves wrote to me recently with an interesting solution to an annoying problem. He uses a Canon imagePROGRAF PRO-1000 printer designed for professional photos and fine art—this is a serious printer. After a recent upgrade odyssey from Mojave to Catalina to Big Sur, Charles started seeing problems with his printouts lacking sufficient color saturation when printing from Photoshop. His research turned up a helpful page by color management consultant Phil Cruse that points the finger at Apple’s AirPrint drivers. (Printouts made from Preview—which can open Photoshop files—were fine, suggesting this is an Adobe/Apple conflict.) Charles followed the instructions and thought he had removed the AirPrint drivers, but the problem persisted. After some discussions with Phil Cruse, Charles realized that he had set up the printer again as a Bonjour printer, which evidently uses AirPrint. Since the printer sits on his Ethernet network, he was able to set it up again as an IP printer with a static IP address, after which the saturation in his prints finally returned to normal.

Color management is a dark art that I don’t understand in the slightest. For giggles, however, I tried using Photoshop to print the same photo using different printer drivers while having Photoshop do color management using the same color profile. I can’t confirm the fix that Charles found, but I can say that the prints were quite different. Anyway, make of this what you will, and I hope it can help some people down the troubleshooting path with other color-related issues.

Charles’s question reminded me of a similar printer problem I’ve struggled with for years. I have an HP Color LaserJet MFP M477fdw that works pretty well on the whole. However, both Tonya and I have often tried to print seemingly innocuous documents that the printer refuses to print. The workaround that we came up with is to create a new printer in System Preferences > Printers & Scanners that uses the Generic Postscript Printer driver instead of AirPrint or Secure AirPrint (the Auto Select option always chooses Secure AirPrint).

I haven’t written about this workaround before because I have no idea why it works; I’m not certain that it resolves the problem for every document; and I’m unsure if there’s a downside to using the Generic PostScript Printer driver. Now I’m wondering if using this driver might hurt the quality of printed photos. Most of what we print is straightforward text and graphics, so it’s not something we would necessarily notice. I also haven’t been able to develop a test suite of documents that might shed some light on the situation—when we have problems, we’re usually more focused on getting the printout quickly rather than troubleshooting.

Regardless, if you struggle with your printer refusing to print some documents, try different drivers. Follow these steps to add one using the Generic PostScript Printer driver:

It might be worth creating several virtual printers with various drivers so you can try others if one doesn’t work or doesn’t print as you’d like. I’ll note that the Generic PCL Printer driver doesn’t support printing in color and may cause flashbacks to the 1990s, when we apparently voluntarily wore clothes that were way too big for us.