Apple’s design aesthetic changes slowly these days, especially in the laptop space. At a quick glance, you’d be hard-pressed to distinguish a silver 2012 MacBook Air from a silver 2016 MacBook Pro from a silver 2020 M1-based MacBook Air. And by you, I mean me. And Tonya. At least her previous laptop, an 11-inch MacBook Air, is enough smaller that it’s easy to pick out in a lineup.

Adding further opportunity for confusion is how we keep a USB-C charger on a counter in our dining room, so our most recent laptops gravitate there when not in use. Since there’s limited space on the countertop, her MacBook Pro and my MacBook Air tend to end up stacked, making it even easier to grab the wrong one. (When Tristan came home for the holidays and added his 2017 MacBook Pro to the stack, it made things even worse; despite being space gray, it was still tricky to differentiate from the others in some lighting conditions.)

A few months ago, Tonya became fed up with this state of affairs and found a few small vinyl stickers that she could affix to the lid of her MacBook Pro to differentiate it from my MacBook Air. That helped, but the kid-oriented stickers were a bit cheesy and cartoonish, and it was still difficult to identify a laptop that was open on the table. On the plus side, vinyl stickers are a tough material that won’t rip or get scuffed easily, and they come off relatively easily without leaving any residue. (Call me obsessive, but I could never bring myself to affix a permanent sticker to a Mac; if I accidentally applied it crooked, it would drive me nuts. And what if I decided I didn’t like it in a year or two? I don’t do bumper stickers on cars either.)

Inspired by the vinyl sticker idea and looking for a present for Tonya, I did a little searching on Amazon and discovered that there’s an entire world of vinyl sticker skins for Apple’s laptops. ​​They’re cut to fit precisely—you have to order for your specific model—and there are numerous full-color photos and attractive designs. Some cover only the top and bottom of the laptop, whereas others include stickers for the palm rests, trackpad, and keys as well. A few hide the Apple logo on the lid, but many are designed around the logo or have a cutout there so it shows through. Prices range from $15 to $30, depending in part on whether they cover just the outside or the inside as well.

The hard part was looking through hundreds of designs to figure out which I thought Tonya would like most and which I wanted. Eventually, I settled on a color burst for her and a forest scene for me, both from a company called Cavka. They took about a month to arrive, in a shipping tube from Minnesota. I hope the lag means that they’re printed on demand rather than being shipped from China, but given the broken English in the Amazon product descriptions, I suspect they’re sent in bulk from China and relayed via USPS to the customer. 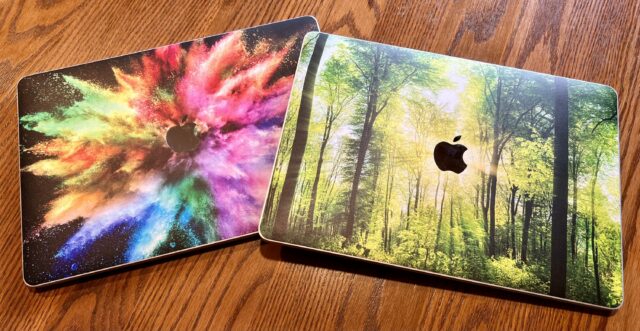 Because of the shipping tube, the skins arrived tightly rolled, which seemed like it would make applying them harder. I had plenty of time before Christmas, so I unrolled them and put them under a heavy book for a few weeks. That helped flatten them, though I don’t know that it was necessary. There were no instructions, but they’re stickers—you peel them off the backing and then affix them to the Mac. 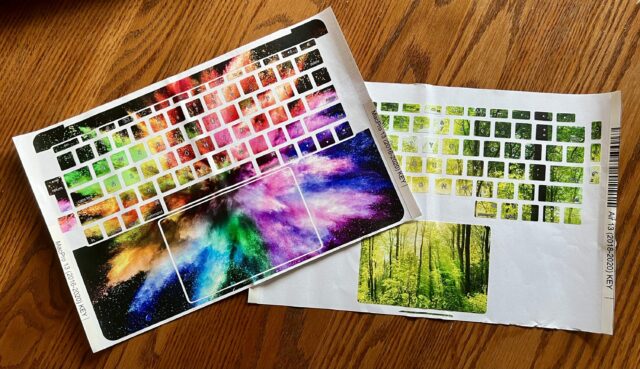 Applying them was harder than I had anticipated because the pieces are fairly large and thus difficult to position and align perfectly. It might have been easier if I wasn’t obsessive about such things, but it took me about 15 minutes to apply them to each laptop to my satisfaction. I tried numerous approaches—from the top, from a corner, starting in the middle—and had to peel the sticker off and try again numerous times. I won’t pretend to be an expert, but I recommend starting from a cutout or notch in the middle and then working your way out to the edges. The main thing I didn’t realize immediately is that the vinyl is just a touch stretchy, so you can apply a little force to thick spots when extending to the edge to make it line up as desired. Be careful in areas where the vinyl is thin. I did rip one around the foot of the MacBook Pro, but the two sides matched up perfectly, so it’s barely noticeable. Of course, you’ll need to work any air bubbles out as well; peel back the sticker on a diagonal to the bubble and put it down flat again. 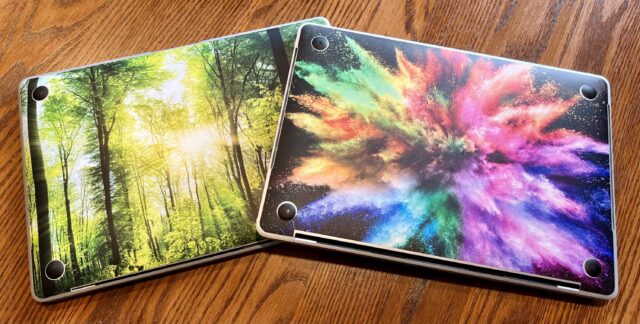 For Tonya’s MacBook Pro, I affixed the stickers to only the lid and bottom case, but for my MacBook Air, I decided to experiment with the inside stickers. The palm rest sticker was a little tricky to align around the trackpad to my standards, but I eventually got it right. The sticker above the keyboard went on more easily, as did the sticker for the trackpad and the Space bar. 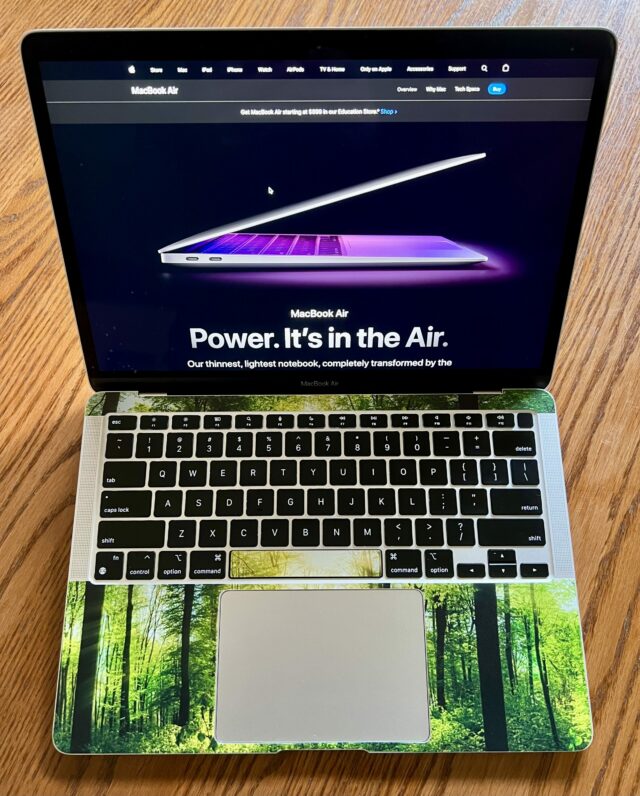 As you can see in the photo, the trackpad sticker didn’t stay on long. I was initially worried that the trackpad might not function properly with the sticker on top, but that didn’t turn out to be the problem. There’s a slight texture to the vinyl, which is extremely welcome on the top and bottom of the outer case, where it noticeably improves grip. I like the texture on the palm rests too, but I instantly hated it on the trackpad, which should feel silky smooth. I didn’t notice any difference when using the stickered Space bar, which was just an experiment. I have no plans to try the rest of the keys since they would defeat the point of having a backlit keyboard, and I may remove the Space bar sticker for consistency’s sake.

We’ve lived with the laptop skins for only a week or so, but we like them a great deal. Telling our laptops apart has become trivially easy, they’re less slippery, and the slightly soft vinyl eliminates the metal-on-metal grating sound when we stack them. I’ve never worried much about scuffing my laptop, but there’s no question that these skins would protect against that eventuality. So if you have trouble differentiating Apple laptops at home or work, or if you want to add a thin protective layer, give a vinyl skin a try.

Now that I’ve gotten the bug, it’s time to spruce up our dishwasher and sun-faded refrigerator, which means deciding between vinyl and magnetic skins, and between Kudu Magnets and Best Appliance Skins.