If you pay any attention to social media, you may have seen posts that say “Wordle” with numbers and a series of mysterious boxes, like so:

Maybe you’ve even read the New York Times profile of the game’s creator and how he made it for his partner.

Wordle is the hottest word game going right now, but how do you play it? The gameplay is simple but not immediately obvious, so let me show you how to get in on the fun. And Wordle is fun if you like word puzzles.

First, go to the Wordle page. Oddly, it’s at https://www.powerlanguage.co.uk/wordle/, not wordle.com or something more obvious. You’re presented with an empty 5-by-6 grid and an onscreen keyboard that’s every bit as mysterious as the boxes in social media posts. 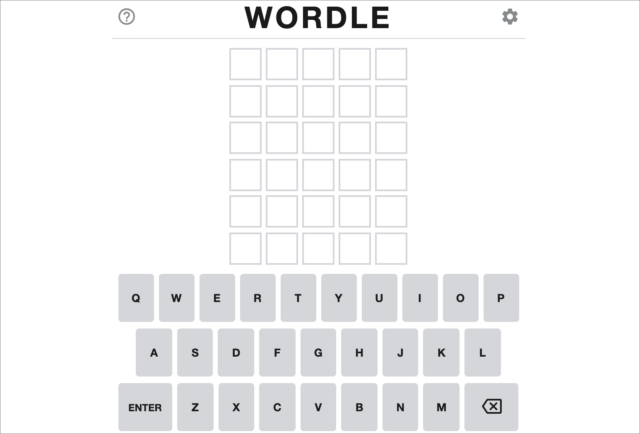 In short, Wordle is a word-guessing game. Each day brings a different word, and you have six attempts to guess it. Start by typing a five-letter word—you can use the keyboard on a computer or click or tap the onscreen keys. Any valid word will work—typing random characters isn’t allowed. When you’re done, hit Enter.

For my first word, I typed POWER. Unfortunately, none of the letters were correct, as indicated by the gray color. On the upside, I eliminated five letters, which are shown in gray on the onscreen keyboard so you know not to use them again. 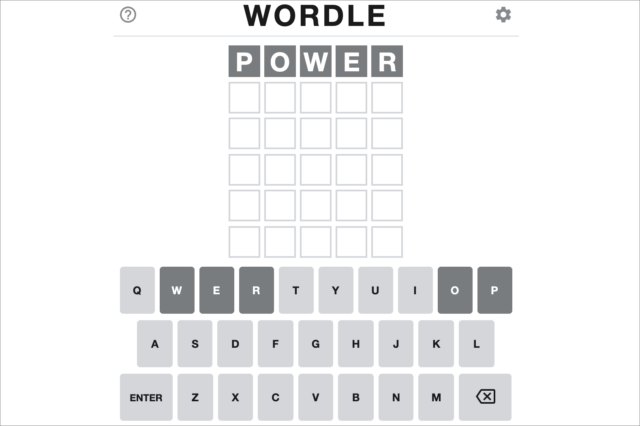 After a bit of thought, I tried the word STAND. The letters A and N were highlighted in yellow, indicating that those letters are in the word, but not in the correct positions. After wracking my brain trying to think of a suitable word that contains A and N in other spots, I tried ANVIL. Wordle highlighted the L in green, which meant that not only is L in the word, but I got it in the right position! Plus, the A and N remained in yellow, which meant that the new positions were incorrect as well. I was getting somewhere. 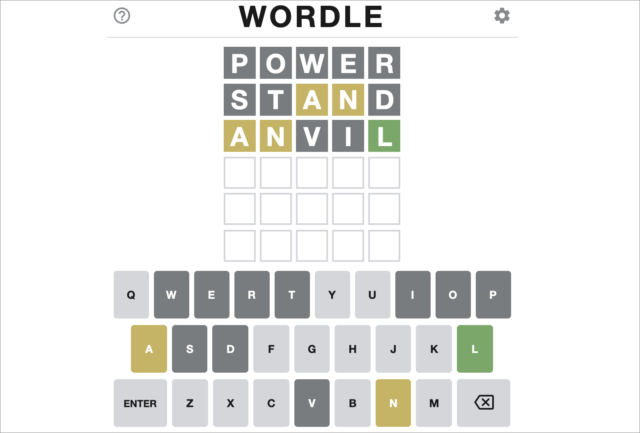 Three more attempts. What word doesn’t have a P, O, W, E, R, S, T, V, or I, but has an A, N, and ends with an L? I decided to try the word BANAL, since B hadn’t been eliminated yet. It was a bit risky since BANAL uses A twice, so if it wasn’t the ultimate answer, I would have eliminated or verified only the B.

If you don’t get the word in six tries, Wordle reveals the answer, and you can try again the next day.

Thankfully, I got lucky. BANAL in four guesses. Everyone gets the same word every day, so don’t spoil it for others. 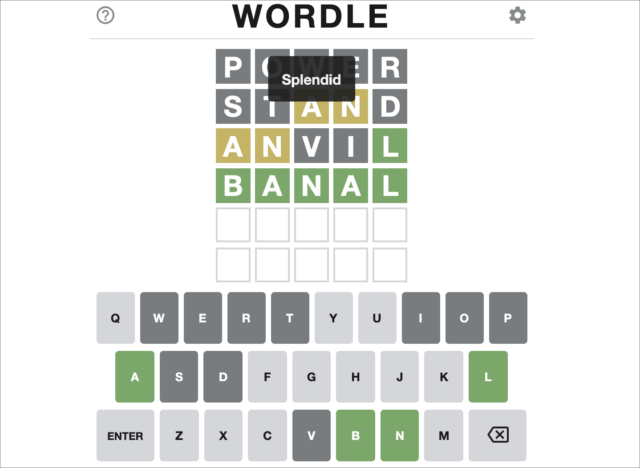 At the end, Wordle presents you with your statistics (tracked by browser, so you have to play on the same device for them to accumulate accurately) and a countdown to the next word of the day. If you want to post your spoiler-free result on social media, click the Share button to copy the results to your clipboard. Or don’t—it’s not like the world needs more meaningless social media posts. 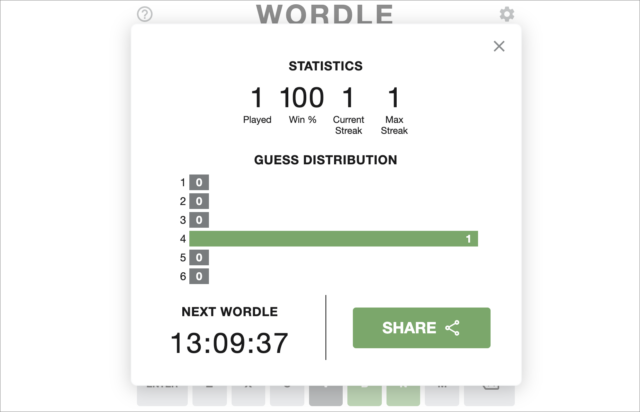 The great thing about Wordle is it takes only a few minutes a day to play, it doesn’t bombard you with ads, and it doesn’t try to waste even more of your time. It’s a nice, quick brain teaser that isn’t too much of a distraction.

Comments About How to Play Wordle, the Word-Guessing Game of 2022