My wife is a great piano player and has been teaching piano her entire adult life, so she’s been dying to teach our 8-year-old son Harris to play for ages. Predictably, he’s shown no interest and is all about sports, unlike his parents.

That’s why we were floored when Harris begged to try Simply Piano by JoyTunes. We were even more puzzled since we hadn’t let him watch YouTube in weeks, which is where he usually sees ads for such things. All I can figure is that it was a combination of an old YouTube ad and a desperate ploy to get access to some kind of screen.

Simply Piano doesn’t provide a virtual piano. Instead, you park an iPhone or iPad running the Simply Piano app near a real piano. The app gives a lesson, the student plays along with it, and the app uses the device’s microphone to pick up on what’s being played and score the exercise accordingly.

Simply Piano requires a non-trivial subscription fee, but it offers a few introductory lessons for free. Harris had never played piano before but quickly breezed through the free lessons and asked to do more. The pricing fluctuates greatly depending on the time commitment. Three months costs $74.99 (~$24.99 monthly), six months is $112.90 (~$18.82 per month), and 12 months is $149.99 (~$12.50 per month). That’s not cheap for an app subscription, but piano lessons from a real teacher like my wife are more like $50 per lesson (and that’s on the cheap end). 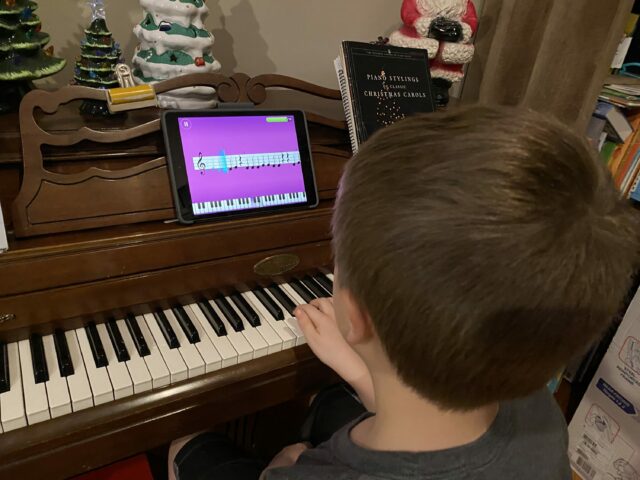 Partially because of the promise of a 7-day trial, I signed up for 3 months because I have no idea how long he’ll stick with the program. We are talking about an 8-year-old’s attention span here. But it wasn’t until after I had paid the money that I realized the 7-day trial was only for the year-long subscription. D’oh!

Tricksy business practices aside, my wife and I have been impressed with Simply Piano. It structures each lesson like a video game. You start by learning the new notes and then playing them at your pace. 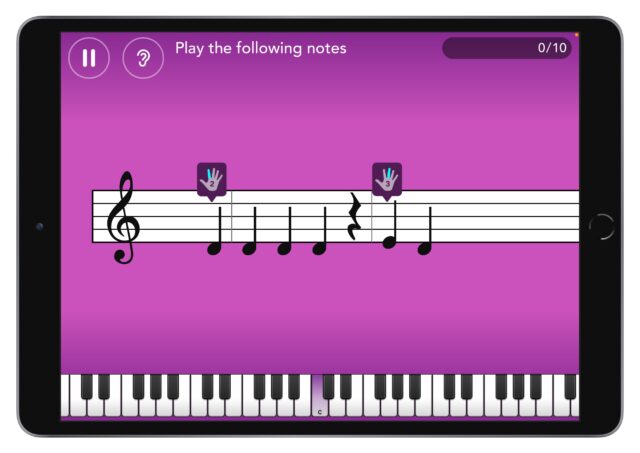 Then the lesson moves on to timed drills where a bar moves across the screen and you have to play the note when the bar moves over it. It’s akin to games like Dance Dance Revolution or Guitar Hero, where you have to press a button at the correct time, except you’re using an actual piano. After you’ve worked your way through all the levels in a lesson, you play a song along with the app, or as Harris calls it, “fighting the boss.” 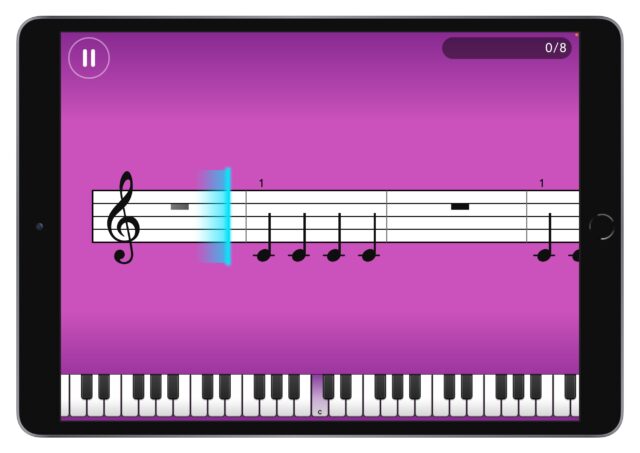 There’s no “Chopsticks” here, happily. The song selections are all relatively modern pop hits like:

As you can see, there’s a lot of variety, and it’s refreshing to avoid the 19th- and early 20th-century music that’s commonplace in piano tutorials, perhaps because it’s out of copyright. (“Chopsticks” dates to 1877, so it’s easy to see why modern kids might not identify with it.) 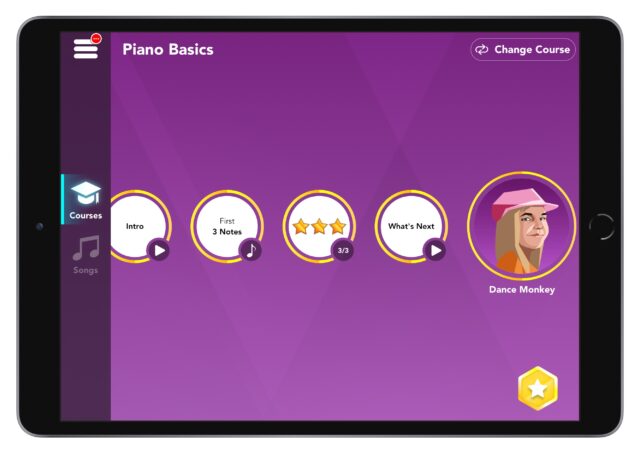 So far, we’ve been impressed with Simply Piano’s lessons. In just a few days, Harris has learned a handful of notes and simple songs, and he kept playing through songs over and over until he got perfect scores. Harris regularly asks for the iPad to play Simply Piano without us having to hassle him to practice.

Overall, Simply Piano’s subscription is a good value compared with piano lessons, and there’s no telling if he would respond as well to a teacher or would put in the practice time on his own. Plus, the app supports multiple profiles, so in theory, my other kids or I could learn to play with Simply Piano as well (though six-month-old Betsy would have a hard time reaching the keys). Making it an even better deal, the subscription also includes the company’s Simply Guitar app.

I wish I could say more about Simply Guitar. Harris tried it, but his fingers aren’t quite strong enough to press the strings against the frets. Based on what I’ve seen, it uses a very similar approach, first helping you tune each string as you learn it and then listening as you pluck the notes to a song along with Simply Guitar’s cues.

If you want to take up piano, have a child or grandchild who might be interested in learning, or would like a virtual tutor to augment in-person lessons, Simply Piano is well worth checking out, and Simply Guitar may be as well.

Comments About Learn to Tickle the Ivories with Simply Piano