I enjoyed working with Glenn Fleishman on “USBefuddled: Untangling the Rat’s Nest of USB-C Standards and Cables” (3 December 2021) because it brought together so many tiny bits of connectivity esoterica. But what if you don’t want to wallow in the geek glory that comes with understanding all the possible ports and protocols and cables? (Even I gave up trying to internalize every variable at some point.) If you would prefer to avoid all the uncertainty and be certain that whatever you plug in will “just work,” we suggested that you get a Thunderbolt 4 cable.

The biggest problem with our advice was cost. Thunderbolt 4 cables, which offer full backward compatibility with USB 3 and USB4 over USB-C connectors, can cost well over $100 from trusted manufacturers, including Apple.

Industry stalwart OWC has now entered the fray, making our recommendation financially feasible. The company has released Thunderbolt 4 cables in three lengths at prices well below those from Apple and other makers:

The real win here is the short cable for $24, which seems to be the cheapest Thunderbolt 4 cable available from any manufacturer. I’m getting a 0.7-meter cable just to have on hand so I can have a cable that’s guaranteed to work in any situation. If you need a 2-meter cable, it’s also nice to be able to pay less than half of what Apple’s charging. 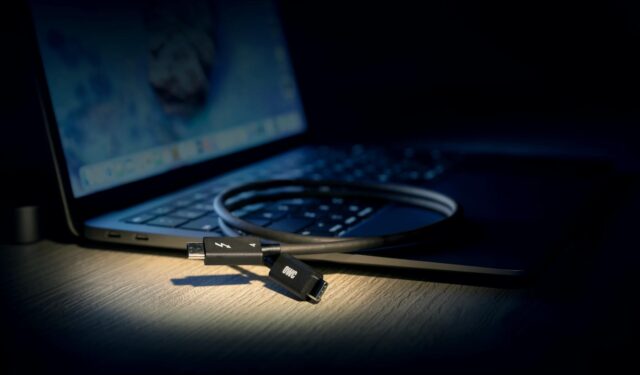 With one of these Thunderbolt 4 cables, you can avoid the confusion that stems from the use of USB-C as the universal connector for Thunderbolt 3 and 4, USB4, and faster flavors of USB 3.1 and 3.2. With just USB and Thunderbolt, a given USB-C cable might support any one of five maximum data throughput rates, with different actual rates based on what devices are on each end of the connection. It’s easy to become boggled by all the specs and buy a cable without a key attribute that will throttle throughput now or cause compatibility consternation in the future. A Thunderbolt 4 cable eliminates all such worry.

While I’m highlighting OWC for these new, affordable Thunderbolt 4 cables, I also want to caution you to pay attention if you’re considering cables from other manufacturers, particularly those offered by Apple at its site—and especially if you reach it via a Web search. Apple now sells three separate Thunderbolt cables, plus a USB-C charge cable that’s easily confused for the Thunderbolt cables in the field:

$129 for a cable seems excessive; you could get a pair of AirPods for that. Happily, besides OWC, other reputable manufacturers like Cable Matters and CalDigit have stepped into the breach with significantly less expensive Thunderbolt 4 cables. But I would warn against ordering a cheap Thunderbolt 4 cable from one of the random companies that appear in an Amazon search because their quality control is unknown.