At some point during the last year, my teen declared that I wasn’t allowed to buy any more cookbooks. We had run out of space in the kitchen, even after a culling session that weeded out some old titles (exotic Jell-O recipes from the middle of the last century won’t be coming back, nor am I likely to cook dinner for dozens). And let me reassure you, my collection is modest compared to many home cooks, maybe a few dozen titles in all.

You're not ready for my jelly, are you pic.twitter.com/vJZRbrIf1t

But I still run into the cookbook conundrum: finding a recipe involves keeping a mental model in my head of which books contain my favorite recipes, and when that fails, I have to flip through multiple volumes. Even though my library is small, the books are shoehorned into various available corners of my kitchen, so I also need to remember where each one is located. (And are they organized in a sensible fashion? No. Have you met me?)

So, like many people, I often turn to a Google search for recipes. That’s fine—if often overwhelming—but it feels like I’m cheating on my cookbooks, which I purchased because they’re beautiful, informative, and usually tell a story about the chefs or the cuisines they feature. I like cookbooks!

Then I discovered Eat Your Books, a website that combines the searchability and discoverability of modern technology with the richness (and generally higher quality) of printed cookbooks. 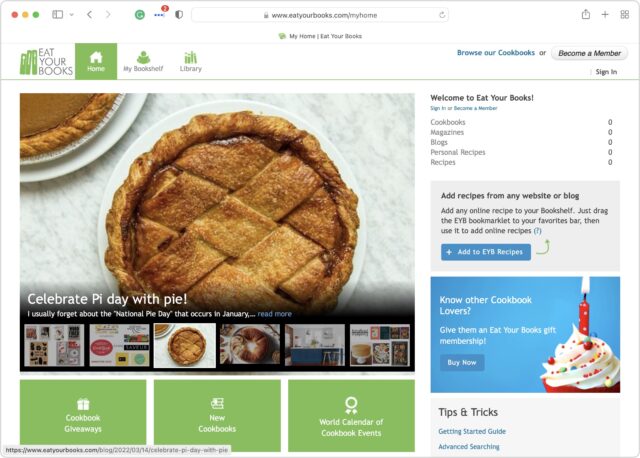 Disclosure: You Don’t Eat Any Books

The core of Eat Your Books is an extensive reference database of the contents of over 160,000 cookbooks and food magazines. It won’t show you any actual recipes because, the company says, that would violate copyrights. (That’s not precisely true; lists of ingredients and simple sets of instructions are not copyrightable. However, recipe introductions and creative instructions can be protected. I suspect the company is trying both to support authors and avoid potential litigation.) Instead, you can search for the name of a dish or ingredient and see matching recipes that come from the books you own.

For instance, let’s say I have some spinach that I need to cook before it wilts. At Eat Your Books, I can click My Bookshelf > Recipes in the toolbar at ​​the top, enter “spinach” in the search field, and view all the recipes in my cookbooks that include spinach. Since spinach is such a common ingredient, I can also filter the results, such as narrowing it down to just recipes from India. 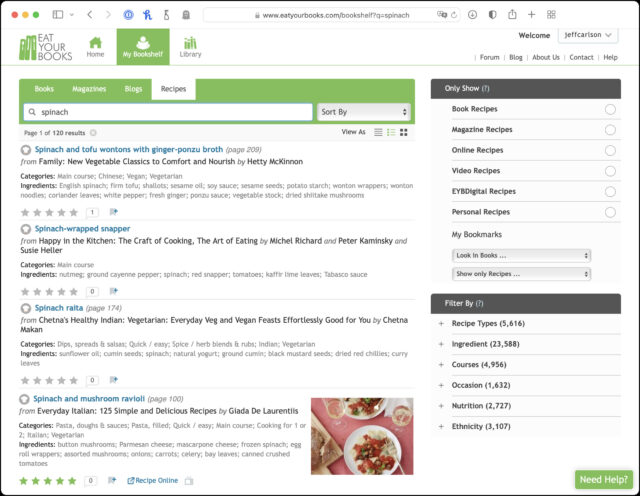 When I click a recipe that looks good, Eat Your Books presents me with the cookbook and the page number on which it appears, along with a list of ingredients so I can make sure I have them all on hand. I can add the items to a simple Shopping List view that I can print or bring up in Safari on my iPhone when I’m at the store. 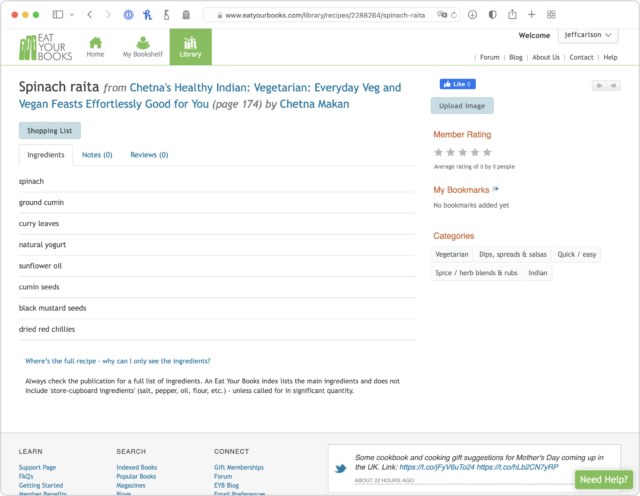 A free Eat Your Books account lets you add up to five books or magazines and an unlimited number of sources for online recipes. A Premium membership, which removes those limitations, costs $3 per month or $30 per year.

Adding a book to your library is speedy. Using the search field under Library > Books, I found nearly all of my cookbooks by typing just partial book titles. You can also enter an ISBN. I was going to make a joke about how I’ve misplaced my CueCat, and how it would be great to scan barcodes if you have a large library… and then I discovered that the Import Books feature does exactly that.

Seeing large book covers as icons is a huge help, such as when I needed to specify that I own the 1997 edition of Joy of Cooking, not earlier or later editions.

Not all of the books in the Eat Your Books library have been indexed. You can still add one to your bookshelf, but you won’t see search results from it. This happens with “books that are unlikely to be indexed by EYB because they are not on sufficient [numbers of] Bookshelves.” In that case, you can click the Request Index link and ask Eat Your Books to add it to the indexing to-do list, or you can request to index the book yourself.

Side Dish Sources of Recipes

Books are the main course, but you can also add food magazines and blogs to your bookshelf. With magazines, you can add each issue as it becomes available or specify that you subscribe to the title to automatically add new issues as they are indexed. To catch up on your back issues, enter a date range of issues. The format is the same: recipe names, ingredients, and page numbers for that issue. 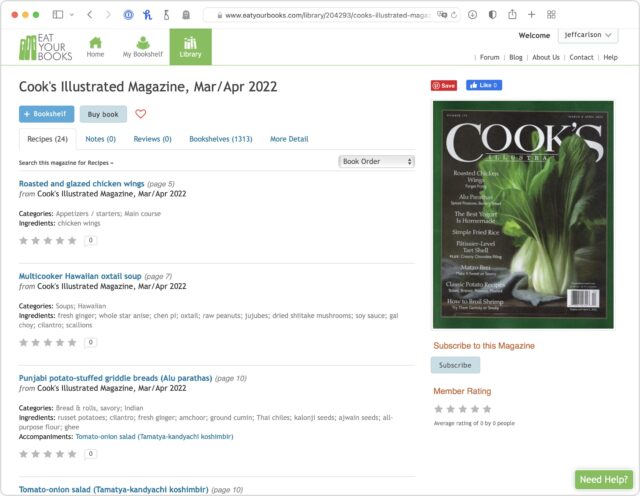 Indexed blogs are in some ways the most interesting part of Eat Your Books because they include a Recipe Online link that takes you to the actual recipe published on the site. Being able to search through a curated set of food blogs is a huge win. There must be hundreds of thousands of them (most telling you at length what Hubby and Precious Child think of their recipes before getting to the actual recipe), rendering the results from a general Google search overwhelming. With Eat Your Books, though, you can restrict your searches to the food bloggers whose taste and expertise you appreciate. 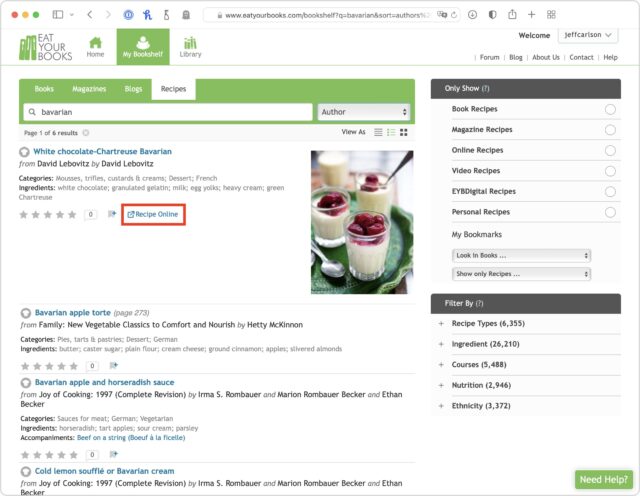 You can also add notes and reviews to recipes on your bookshelf, which can be shared with the greater Eat Your Books community or saved privately in your account. The public notes can be helpful to scan for recipes you haven’t made before, though they still occasionally suffer from comments from people who made numerous radical substitutions but are peeved that the recipe didn’t come out right. Of course, you can bookmark favorite recipes to aid in quickly getting back to them—or at least to their page numbers.

If you run across an online recipe you like, you can use a bookmarklet to add it to your bookshelf. It attempts to scrape the information from the site and pops up a window for you to add other information that wasn’t grabbed. However, the recipe must be approved by Eat Your Books before it goes into the library. I’ve long used the service AnyList for saving recipes, which does a great job. Others at TidBITS are fond of Paprika (see “FunBITS: Paprika Recipe Manager for iPhone, iPad, and Mac,” 14 March 2014).

You can also browse for cookbooks you don’t own. The Eat Your Books home page spotlights books, ingredients, and food-related news, such as a feature on cookbooks that celebrate the cuisine and people of Ukraine. Eat Your Books also features reviews of new titles and lists of best-selling titles from many independent booksellers, including my favorite local all-cookbook book store, Seattle’s Book Larder.

When you’re browsing a cookbook, you can also see how many people have it in their bookshelves, which is a great way to see which titles are popular. The list also reveals how many books the members own—or at least have added to their bookshelves. It’s not uncommon to see people with thousands of titles!

Some cookbooks in Eat Your Books include EYB Previews, which are PDF-like selections containing a few pages to give you a feel for the recipes and look. As you can see, the site also looks great on an iPad. 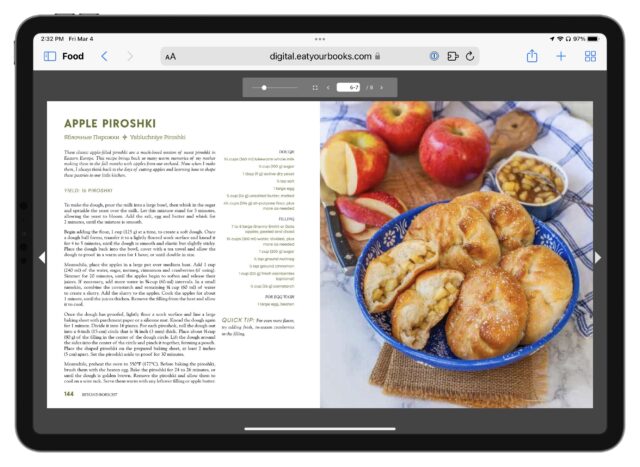 Unsurprisingly, if you find a book you want, you can buy it using affiliate links that support the site.

A Few Scorched Edges, but Overall a Good Bake

I have only a few criticisms of Eat Your Books. Some older recipes (pre-2015) don’t include page numbers, only cookbook titles. That’s not a major problem, since you can always check the table of contents or index when you actually open the book.

A trivial annoyance is navigation. It would be nice if the home page would display a search field for My Bookshelf > Recipes when you’re logged in. But it’s easy enough to create and use a bookmark to the My Bookshelf page, whose search field does default to Recipes.

These are minor gripes. Although Eat Your Books is a database at its center, its heart is the love of cookbooks shared by its members. The site is trying to make a cook’s life easier and more integrated with the real world, not supplant the beauty and storytelling qualities of good cookbooks. It also helps me get out of ruts where I cook the same handful of dishes from the few cookbooks I can remember and reach.

Comments About Use the Web to Cook Your Books