Rogue Amoeba Software’s Audio Hijack 4 has arrived with significant interface improvements, new features, and enhancements. The audio-recording workflow app should be easier for existing users, smoothing and removing quirks that irked us in version 3, and faster to master for novices. Changes and additions enable better audio mastering and mixing while recording, letting you capture a live session as something close to the final version for broadcast or distribution—or maybe even good enough to upload immediately.

Audio Hijack provides a clearly expressed workflow for capturing, modifying, and outputting audio. You set up a “session” to grab audio from any source on a Mac, whether an app, mic, digitizer, or virtual audio device, and route it through “blocks,” workflow units that act upon or visualize the audio. Sessions typically end with a recording block to write processed audio to a disk file or an audio output block that sends the sound to headphones or other listening devices. You can also pipe output to supported live streaming services.

You can split blocks to send audio on multiple paths: you could record an audio stream and output both a highly compressed mono MP3 and an uncompressed AIFF file simultaneously. You can also merge paths from blocks to combine multiple audio sources into a single processing flow or recording. For audio intended to be edited later, one path might produce a merged, compact MP3 file for immediate posting, while the other records separate tracks for each speaker in a conversation as uncompressed AIFF audio files.

Audio Hijack is widely used by Mac-oriented podcasters and audio studios to capture separate mics for in-person recordings and audio channels for recordings via voice-over-IP and videoconferencing apps like FaceTime, Skype, and Zoom. Audio Hijack 4’s new features should make it even more popular.

Version 4 groups major changes into three piles: interface, new blocks, and enhancements to existing blocks. Taken together, they reduce friction and make it more of a pleasure to use the app.

The previous version of Audio Hijack introduced an innovative way to connect blocks. Drag them near each other and a connection appeared to snap blocks together. Nifty—but problematic. Dragging had to be precise, and small movements could cause connection lines to be sucked from one block to another. Complicated workflows could end up with connectors ping-ponging all over the place or result in an enormous virtual space that made it impossible to see the entire workflow at once.

Rogue Amoeba made automatic connections an option in Audio Hijack 4. Some users may prefer them to create workflows quickly, letting the app snap linkages based on proximity as blocks are dragged. But for complicated paths, it’s now a cinch to deselect Session > Automatic Connections to disable automatic connection mode and then drag blocks into arrangements that you can parse more easily. You then connect blocks by dragging between the plus (+) signs that appear on the left and right sides of blocks.

The company also updated Audio Hijack 4’s connector style. Connections now have blue arrows that point in the direction of the flow of audio and may curve for better visualization instead of appearing as straight line segments; they’re animated and highlighted in orange while a recording session is active and a given source or connection between blocks has active audio. The new Light Mode interface option also makes it easier for many people to view blocks.

Audio Hijack 4 sports other interface improvements. The previous release used a space-occupying layout to show sessions. It’s now a much simpler, more compact list. Instead of offering a passive summary, the Session List allows monitoring and control of all sessions. Audio Hijack 4 also put most of the Session List controls into an optional system menu. 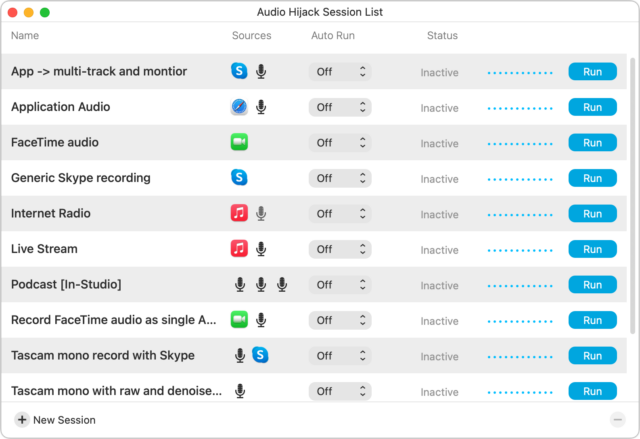 In Audio Hijack 3, it was often a chore to find recordings after you’d finished running a session, like recording a call. Each session in Audio Hijack 4 now provides a tabbed sidebar that organizes recordings, including a sound visualization preview of what was recorded, along with any scheduled times the session runs automatically, scripts (also new), and general info. 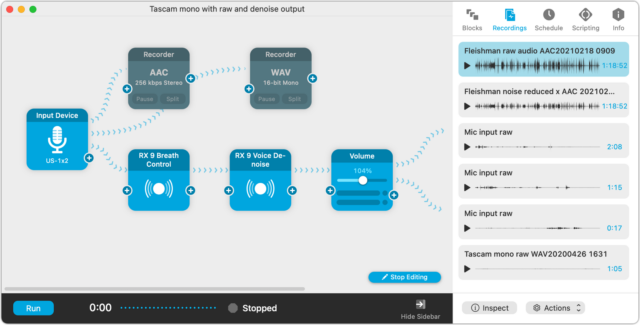 For those who record people speaking or performing, three new blocks simplify and improve setting up complicated sessions and producing audio directly from a session for live broadcast or quick posting of a file.

Rogue Amoeba has also enhanced existing blocks, mostly to make more information available on the “face” of the block—its appearance as a unit in the interface—or provide better access to its features because at-a-glance visualization is a key part of Audio Hijack’s approach. For instance, Volume Blocks that change the volume as audio passes through them now have levels on their faces, Channels show the action in inputs (like swapping left and right), and the 10-Band EQ (equalizer) reveals the positions of the sliders for each of the 10 bands that can be adjusted. An Input Switch block that allows swapping between two sources can be set as a floating palette visible across all apps. All blocks can now save and load presets, allowing reuse of settings across the app.

Separate from those improvements, Rogue Amoeba has finalized Audio Hijack’s previously beta Live Stream feature for sending output directly to streaming services that use the RTMP protocol—like Facebook Live, Twitch, and YouTube Live. Live Stream also now lets you set a preview video frame that can include text and images, including audio visualizations, sent with the stream.

Those who use Audio Hijack heavily can set version 4 to run sessions automatically when the app launches so it’s recording or processing in the background all the time. Such people will also appreciate being able to close a session window while it continues to run, rather than having to keep it visible. And anyone who has a broader audio workflow will want to check out the new Shortcuts support in Monterey and scripting support via JavaScript. Rogue Amoeba provides a bunch of built-in scripts that are both useful in their own right and helpful for learning how to write your own scripts from scratch.

Speaking as a long-time Audio Hijack user, these improvements have proven to be a real-world boon to many of my routine activities. I expect others who work with the app will also find it a significant upgrade. But Audio Hijack 4 really shines in reducing the learning curve for new users who haven’t yet discovered the glories of taking control of their audio and funneling it in new directions.

Audio Hijack 4 costs $64 for new users or $29 for upgrades from Audio Hijack 3. You can download a trial version that lets you try all the features but adds unremovable noise after 10 minutes into an active session. If you’d like more background on using the app, you can also purchase Kirk McElhearn’s updated Take Control of Audio Hijack during checkout at Rogue Amoeba’s store.