The most significant limitation for mobile devices is power. Engineers keep finding ways to cram more transistors into chips, but batteries have hit a brick wall of physics, forcing hardware makers like Apple to invent creative workarounds for those limitations.

The inherent problem is that lithium-ion—the current battery chemistry of choice—isn’t particularly stable. It’s more forgiving than older technologies like nickel-cadmium, but it’s all too easy to shorten a lithium-ion battery’s lifespan by:

Users have two conflicting desires with regard to batteries, whether or not they realize it. In the short term, they want the device always charged and ready to use—little is more frustrating than running out of power earlier than you’d expect in a day. Long-term, they want the battery to maintain its capacity for as long as possible—replacing a battery to bring a device back to decent daily battery life is expensive and annoying.

In an effort to meet both of these conflicting desires, Apple has developed two seemingly contradictory technologies: fast charge, which does what it says, and Optimized Battery Charging, which actually makes the battery charge more slowly.

Certain Apple devices—most notably the iPhone 8 and later, USB-C iPad models, and 14-inch and 16-inch MacBook Pro models—support fast charge, which can boost the battery up to 50% in 30 minutes.

Fast charge requires a sufficiently powerful charger and appropriate cable—it does not work with wireless MagSafe and Qi chargers. For each of the device families, you need:

But fast charge only takes a battery to 50%. To get the rest of the way in a manner that doesn’t result in the battery sitting at 100% for a long time, Apple developed Optimized Battery Charging.

Batteries don’t like being held at 100%, but users want their batteries to be at 100% when they start the day. How does Apple walk that line? Starting with iOS 13 and macOS 10.15.5 Catalina, Apple has provided features to reduce the maximum charge to extend the battery’s life. The first is Optimized Battery Charging.

Optimized Battery Charging uses machine learning to guess when and where you charge your devices the most and hold the battery’s charge at 80% until it thinks you need it to be at 100%.

Apple’s optimized battery charging is a variation on this. It uses constant current charging until the battery’s charge reaches about 80%. Then instead of doing constant-voltage at a fixed voltage, it will dynamically select voltages so it will reach 100% shortly before it thinks you will remove the device from the charger. For example, if your usage history says you remove it from the charger at 8:00am every morning, it might try to reach 100% at 5:30am, even though a traditional constant-voltage charger might be able to bring it to 100% at 2:00am.

In theory, you should rarely notice this feature because it works while you’re asleep. In About Optimized Battery Charging on your iPhone, Apple says:

Your iPhone uses on-device machine learning to learn your daily charging routine so that Optimized Battery Charging activates only when your iPhone predicts it will be connected to a charger for an extended period of time. The algorithm aims to ensure that your iPhone is still fully charged when unplugged.

Optimized charging is designed to engage only in locations where you spend the most time, such as your home and place of work. The feature doesn’t engage when your usage habits are more variable, such as when you travel.

Optimized Battery Charging is location-specific, as you can tell by the fact that the following settings must be enabled for it to work on an iPhone:

When Optimized Battery Charging is enabled on an iPhone, a notification appears on your screen. To bypass it and fully charge your battery, touch and hold the notification and tap Charge Now. You can also turn off Optimized Battery Charging in Settings > Battery > Battery Health, but that’s probably a bad idea unless you’re regularly starting the day with less than a full charge. 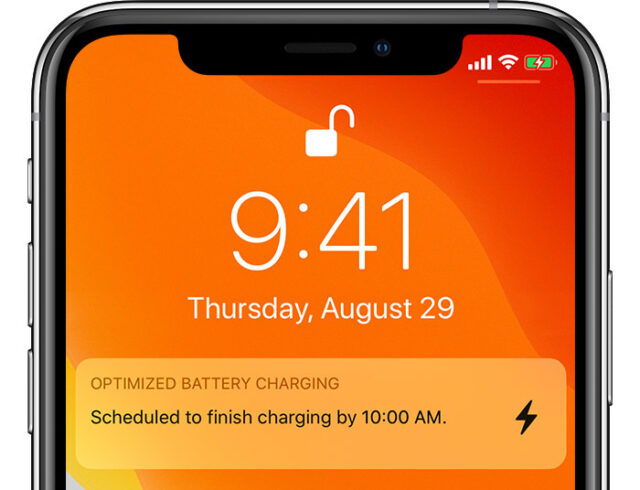 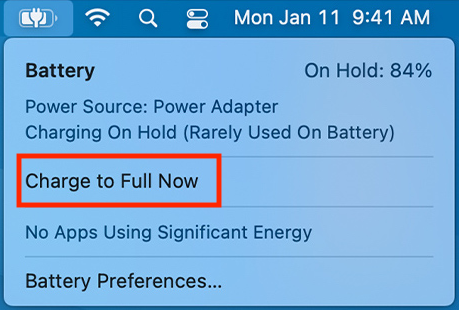 To turn off the feature, go to System Preferences > Battery > Battery and uncheck Optimized Battery Charging. You can disable it permanently or just for a day. Again, don’t do this unless you’re regularly butting heads with the feature. 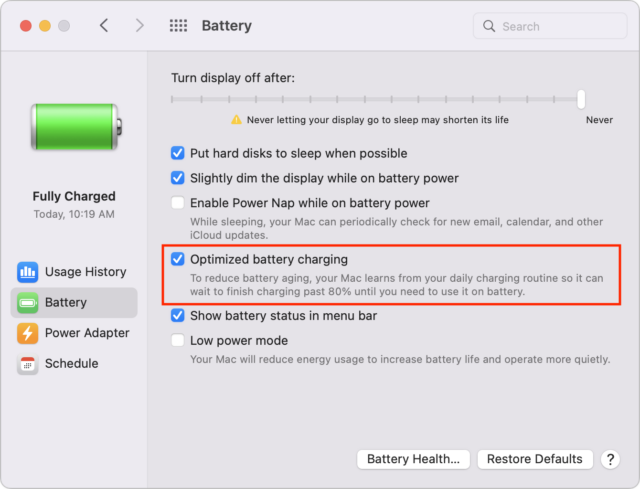 As far as we can tell, iPads don’t support Optimized Battery Charging.

Beyond Optimized Battery Charging, iPhones and iPads have a charge management feature that temporarily reduces the battery’s maximum charge capacity when devices are constantly plugged into power. Apple says:

iPad with iOS 11.3 or later and iPhone XS, iPhone XS Max, or iPhone XR with iOS 12 or later include a charge management feature to help maintain battery health, which monitors these devices for use in these charging situations and, as required, reduces the maximum capacity of the battery. The battery indicator will display the charge percentage based on this adjusted maximum capacity. The maximum capacity will revert back to the nonadjusted level when iPad or iPhone is no longer connected to power for prolonged periods and as conditions and battery health allow.

On iPhones and iPads, this charge management feature is automatic, and you can’t turn it off.

Battery health management is designed to improve your battery’s lifespan by reducing the rate at which it chemically ages. The feature does this by monitoring your battery’s temperature history and its charging patterns.

Based on the measurements that it collects, battery health management may temporarily reduce your battery’s maximum charge. This happens as needed to ensure that your battery charges to a level that’s optimized for your usage—reducing wear on the battery, and slowing its chemical aging.

You cannot disable the feature on M1-based Macs, but you can on Intel-based Macs by going to System Preferences > Battery > Battery > Battery Health and unchecking Manage Battery Longevity. Again, we generally recommend against disabling it, but if it’s preventing you from charging to the level you need at a particular time, it might be worthwhile to turn it off. 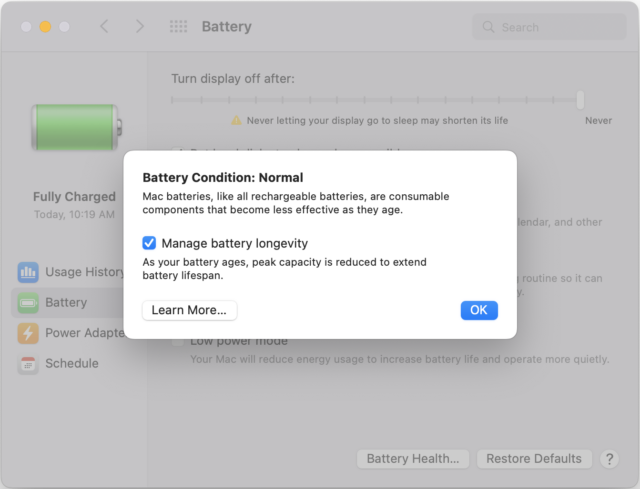 In the end, as frustrating as it is that battery technology hasn’t evolved in step with the computational capabilities of our devices, it’s nice to see that Apple is using some of that processing power to make the most of what our batteries can do.