Apple’s watchOS 9, unveiled at the company’s Worldwide Developers Conference, focuses on enhancing the Apple Watch’s health and fitness capabilities while, as usual, adding a batch of watch faces and interface enhancements.

Let’s look first at what we think are the standout watchOS 9 features and then move on to less compelling changes. 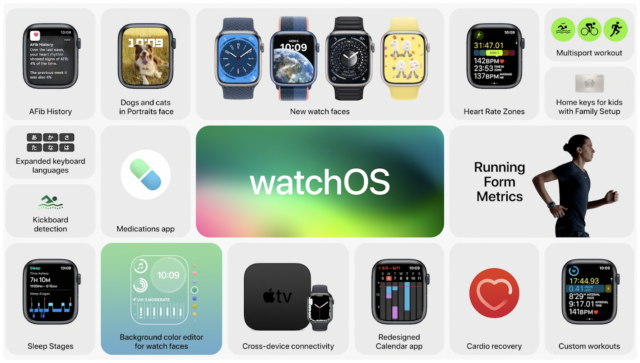 This all-new Apple Watch app—with complementary functionality in the iPhone’s Health app—is aimed at those who juggle multiple medications and worry about forgetting to take them when they are supposed to.

After you enter your medications, vitamins, and supplements into the Health app, you can see information about each on the iPhone or Apple Watch, plus set up schedules and reminders. Health will also alert users in the United States if “critical interactions” among two or more meds create a potential health risk. 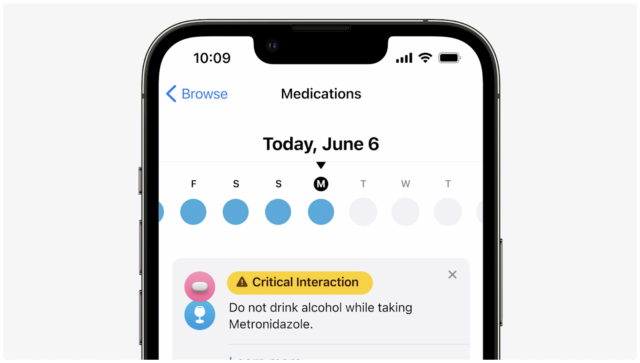 We’re very much looking forward to trying Medications—it’s all too common to end up taking multiple pills per day, and any assistance in avoiding interactions and missed doses will be welcome.

Few Apple Watch features are more important than the Dock, which lets users access recently used or favorite apps with a press of the watch’s side button.

watchOS 9 adds a brilliant little tweak: apps that are actively in use now appear above the rest of the apps in the Dock, making it easier to return to them quickly.

There’s a reason new watch faces always figure prominently into watchOS unveils—who doesn’t love ‘em? (OK, they’re always worth checking out, even if you always go back to Infograph Modular like many of the TidBITS staff.) watchOS 9 has four new and revamped faces:

Apple also announced a grab bag of improvements to existing faces. Complications got facelifts in the Utility, Simple, and Activity Analog faces. Background color editing is now available in the Modular, Modular Compact, and X-Large faces.

But third-party developers still can’t create their own faces.

The Apple Watch’s ECG app, along with its irregular rhythm notifications, has been able to identify potential signs of atrial fibrillation (or AFib) for a while. Left untreated, AFib is a health factor among those who suffer strokes.

With watchOS 9, users diagnosed with AFib will be able to monitor that condition over time, assuming Apple’s FDA approval comes through. The AFib History feature estimates how frequently a user’s heart rhythm shows worrisome patterns and gives users weekly notifications so they can keep track.

For Users with Disabilities

A recent watchOS feature called Quick Actions lets a user with disabilities control their Apple Watch with physical gestures such as a finger pinch or fist clench. As Apple announced a few weeks ago (see “Apple Previews Upcoming Accessibility Features,” 17 May 2022), watchOS 9 extends the feature to actions such as answering or ending a call, taking a picture, playing or pausing media, and controlling a workout.

In addition, watchOS 9 adds a feature called Apple Watch Mirroring for those with physical or motor disabilities. It allows a user to control their Apple Watch remotely using a paired iPhone. This is possible with voice input, head tracking, external Made for iPhone switches, and more.

watchOS’s Workout app, which is the primary reason many people have an Apple Watch, has been updated with better metrics for measuring athletic performance and new tools for attaining fitness goals.

Heart Rate Zones, which can be created manually or generated based on health data, can be helpful for monitoring the intensity of a workout, although you should be aware that heart rate can vary based on recovery state, sleep, or illness, so it’s not always a reliable fitness metric. 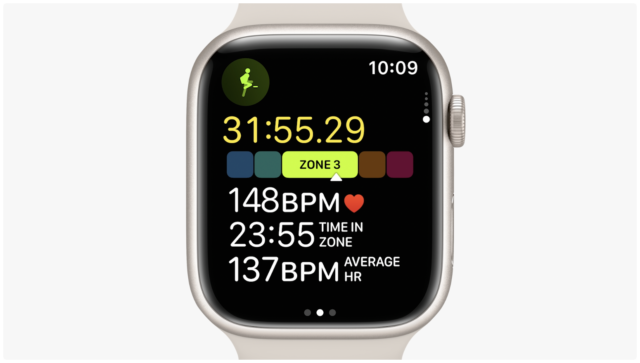 A new Custom Workouts feature is handy for those engaged in interval training since it lets you create a structured workout that includes active and passive stages.

Cardio Recovery is a useful fitness metric that can be an indicator of cardiovascular health. Apple Watch now offers Cardio Recovery estimates after an Outdoor Walk, Run, or Hiking workout, even when you don’t reach peak intensity.

The Apple Watch is already popular among runners despite its awkward physical design, and watchOS 9 adds significant functionality that puts it more on par with running-specific watches from the likes of Garmin.

New running form data such as stride length, ground contact time, and vertical oscillation can be added as metrics in Workout Views. These appear in the Fitness app summary and in the iPhone’s Health app, where you can see trends over time and learn from patterns. Or at least that’s the theory—it’s hard for most people to change their running form without active coaching. We’ll see how these metrics compare with those from other systems that rely on foot or waist sensors.

The Workout app also remembers frequently used routes, and you can race against your best or last result and get alerts during a  workout for being ahead or behind your pace, or if you’re veering off-route. A new pacer feature lets you choose a distance and goal for the time in which you want to complete a run, and it calculates the pace required to achieve your goal. During the workout, you can follow pace alerts and related metrics.

As noted, these features make the Apple Watch significantly more competitive with running-specific watches, and TidBITS publisher Adam Engst, who wears both his Apple Watch Series 5 and Garmin Forerunner 645 (with waist pod) on all runs, will be putting them through their paces soon.

As has been the case for the last few major watchOS updates, watchOS 9 strikes us as entirely welcome without being earth-shattering. It seems like a fine upgrade that will enhance but not revolutionize the Apple Watch experience.