I hope I’m not alone in using Preview for many basic graphic manipulations. As Josh Centers and I outlined in Take Control of Preview, the app has a surprising amount of power for cropping screenshots, resizing images, adding annotations, and even editing pixels. (For instance, I frequently copy a rectangle of a screenshot’s background color and paste it over something I’d like to “delete.”)

Alas, cropping, which is one of the most common things I do in Preview, became harder in Monterey, thanks to the addition of Live Text. That’s because Preview sometimes thinks I want to select text in the image rather than drag selection handles. Annoyingly, this problem is not predictable—I can run into it with a particular screenshot but be unable to reproduce it with the same screenshot later. Plus, the frequency with which I experience the problem has been falling, perhaps due to Apple improving the logic behind selecting.

If you’re suffering from a click-and-drag giving you a text selection when you want a rectangular selection, I’ve found a trick for increasing your chances of being able to use the selection handles. Resize the window so you can see the canvas on the edge where you need to grab the selection handle. Then, approach the handle from the canvas side so macOS sees your click and drag as happening just outside the area where there’s text. 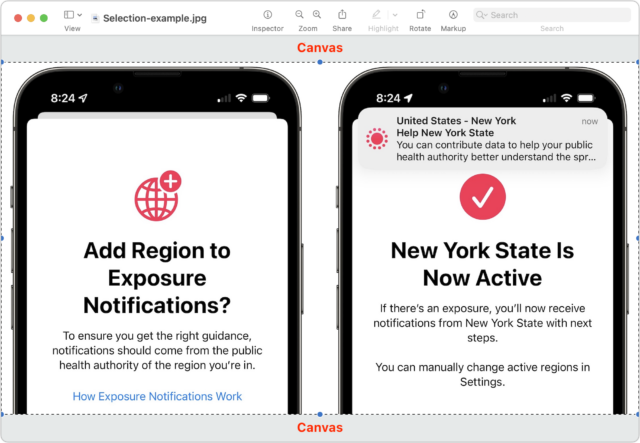 If that trick isn’t sufficient, there’s a way to return Preview to its normal selection habits. It requires turning off Live Text entirely, but as much as I think being able to select text in images is tremendously cool, I rarely need it, whereas I frequently crop images in Preview.

I didn’t even realize that disabling Live Text was an option until I opened the Language & Region pane of System Preferences for another reason. But there it was, a checkbox labeled “Select Text in Images.” Deselecting that ensured that I could always drag selection handles in Preview once again. 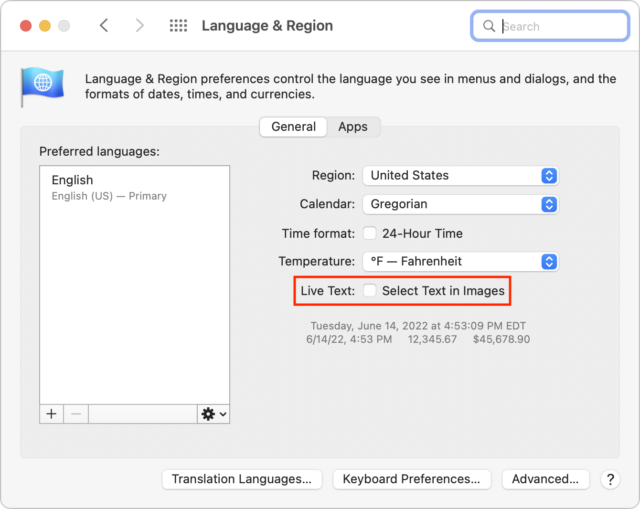 I started this article feeling quite pleased with myself for discovering this oddly placed checkbox for disabling Live Text, but my enthusiasm waned with my inability to reproduce the selection problem reliably. Most people probably aren’t having any issues with Live Text taking over selections, but if you are, I hope my discoveries here help.