The curse of the modern world is that we’re constantly condemned to think about batteries. Why is my iPhone running low on power so early in the day? Why didn’t my Apple Watch charge last night? Will there be a power outlet on the airplane for my MacBook Air? And for an ever-increasing number of us, does my electric car have enough range for that road trip? Despite this mental churning, it’s still possible to be surprised by a drained device at an inopportune time, as I recently discovered. But with a little forethought and the appropriate backup gear, such situations can be avoided.

One of my hobbies in the running world is directing track meets for the Finger Lakes Runners Club. That requires running a crufty Windows app called HyTek Meet Manager, something I’ve long done in virtualization using Parallels Desktop or VMware Fusion running on Tonya’s 2016 MacBook Pro. Ignoring the annoyance of having to use Windows and Meet Manager, the approach has worked well for years.

(My setup is actually even more wonderfully arcane. For timing, we use a Time Machine, a race timing device created decades ago that combines a highly accurate timer with a small LCD screen, thermal printer, and keypad—that’s what we’re all staring at below. It supports both wired and wireless thumb switches for recording runners’ times, can start a large display Raceclock automatically—the thing behind my head—and most importantly, can send results to Meet Manager. That connection starts as RS-232 serial at the Time Machine, is converted to USB with a Keyspan RS-232 to USB adapter, and then uses a USB-A to USB-C adapter to plug into the Mac, where the virtualization environment connects it to Windows. In Meet Manager, once I plug everything in, I have to tell it that the track button interface is using serial port 3. Then we print results using a Canon Pixma iP110 mobile printer. I remain amazed that it works at all.) 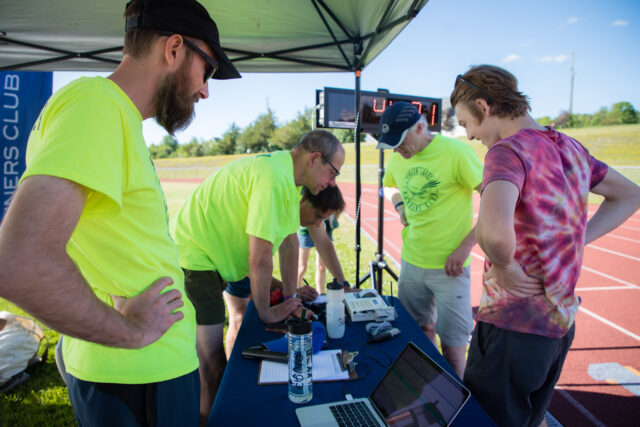 All the hardware we use, including the MacBook Pro, Time Machine, Raceclock, and Canon Pixma printer, is battery-powered, which is essential for outdoor track meets because many tracks don’t have power available where we set up on the infield near the finish line. I’m obsessive about ensuring that everything is charged before the meet because if something runs out of power, we have to scramble. Realistically, we have sufficient backup systems and experience that we can recover from the loss of any device, but it’s not ideal.

So you can imagine my distress two weeks ago when, midway into the 800-meter race that was the second event of the five-event meet, my results clerk told me that the MacBook Pro had just warned that it was low on power and would be shutting down shortly if we didn’t plug in it. We had been using it for maybe 90 minutes to deal with late registrations and heat changes, but that was nothing new—I’ve been relying on this MacBook Pro for years. I knew it was charged to 100% before I left the house, but I hadn’t internalized just how old it was. It worked fine at last year’s track meets, but they were both really short due to the pandemic and bad weather keeping people away, and as I suddenly realized, its battery was yet another year older and weaker in amps. (A strained analogy, I’m sure, but I couldn’t resist the reference to the tune of Merle Travis’s “Sixteen Tons.”)

There was nothing to do but close the MacBook Pro’s lid and carry on, knowing that we wouldn’t be able to bring results in from the Time Machine or print results sheets for runners. There was no way to get my car onto the track, and although there was power in a press box at the track, I hadn’t even brought the MacBook Pro’s USB-C charger because I knew that we couldn’t run the system from that location. But as I said, we know what we’re doing, so we continued the meet without pausing, assuming that we could either bring the results in from the Time Machine the next day or type them in from the thermal printouts that each race generated. And that proved to be true—all’s well that ends well.

Nevertheless, the experience troubled me. The MacBook Pro clearly wasn’t going to survive an outdoor track meet again, so I needed to come up with a solution before the next meet later this month. Possibilities included:

None of these seemed like a sufficient win, but then a friend turned me on to yet another category of battery—the “power station” that’s meant as a replacement for a gas-powered generator. On the high end, these things can weigh 50 pounds or more, cost several thousand dollars, and power appliances like hot plates and air conditioners. But on the low end, they get more interesting for my purposes.

The big name in the field appears to be Jackery, and its Explorer 160 costs only $139.99 for 167 watt-hours of energy storage with an AC outlet, USB-C port, two USB-A ports, and a DC 12V port. It’s reasonably light at 3.97 pounds (1.8 kg), which is important given the amount of gear I have to pack. The only downside is that its USB-C port puts out just 15 watts, not enough to charge the MacBook Pro while in use. I could plug the MacBook Pro into the AC outlet, but that seems limiting when there’s a USB-C port. The Explorer 300 puts out 60 watts over USB-C, but its 293 watt-hour capacity jacks its weight up to 7.1 pounds (3.22 kg) and price to $299.99.

I couldn’t resist delving into the rathole of random-brand Chinese manufacturers on Amazon, where I first found the $138 ALLPOWERS Portable Charger, which offers two AC outlets, a 60-watt USB-C port, two 15-watt USB-A ports, and DC output. It provides 154 watt-hours of energy storage in a package that’s described as either “about 3 lbs” or (by Amazon) 4.38 pounds (1.99 kg). But some of its reviews gave me pause.

After several hours of research, I finally unearthed the $89.99 TECKNET Portable Power Station, a 155-watt-hour, water bottle-sized device with a carrying handle that weighs 3.75 pounds (1.7 kg) and features a three-prong AC outlet, a 45-watt USB-C port, and three 18-watt USB-A ports. That seemed just about perfect for my needs, so I’ve ordered it and will find out how it performs in the real world at the next track meet. If you’re looking for one of these power stations, pay close attention to all the specifications because they vary widely. 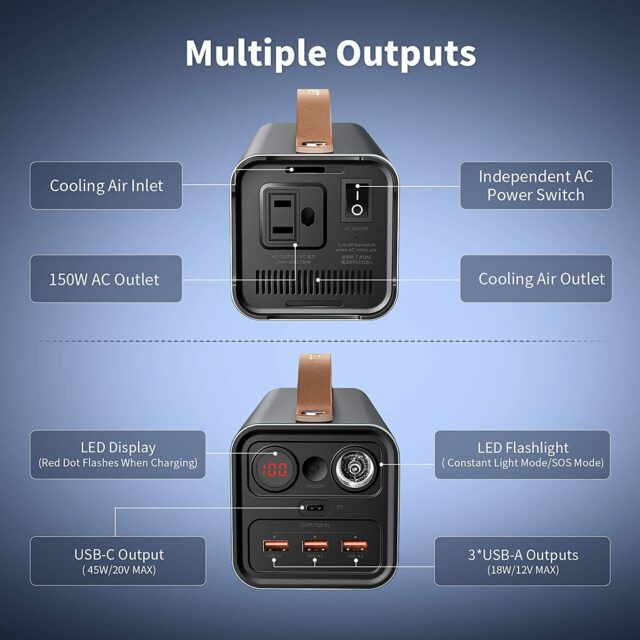 The Battery I Already Had

While discussing the power station concept with my friend, I realized I had an appropriate battery in the car all along! With the appropriate charging cable! This is all a bit embarrassing, but I want to share it nonetheless because the solution could also be useful for you.

Our Subaru Outback has a nasty habit of running its battery down if a door doesn’t close entirely and leaves an interior light on for days (we mostly drive our Nissan Leaf because it’s electric, but it’s too small to carry all the gear I need for a track meet). After years of fussing with jumper cables or using a slow, old-style battery charger, I bought a 1200A Tacklife KP120 Jump Starter (the current model would seem to be the $89.99 T8 Pro), which is an 18,000 mAh battery that can start a car with a dead battery in seconds. It’s a brilliant device, and I’ve used it successfully with both the Outback and my 1959 Ford Powermaster 841 tractor. When not in use, it lives in the Outback, just in case the battery dies while we are away from home or need to jump-start someone else’s car. 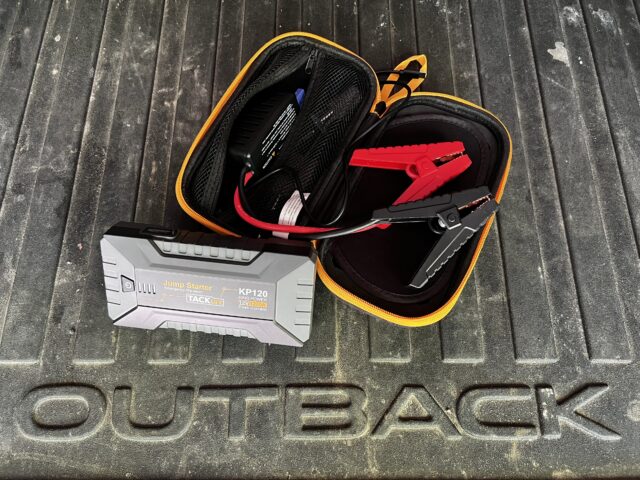 The Tacklife jump starter also has a USB-C port, two USB-A ports, and a DC port. Alas, the USB-C port puts out only 15 watts (5 volts at 3 amps), which means it can’t charge the battery while the MacBook Pro is operating—macOS reports “Not charging” whenever it’s plugged in. When the MacBook Pro was asleep, the jump starter was able to add roughly 50% of a charge to the MacBook Pro’s battery, draining itself in the process.

That’s not useful to me, so my question was if it would slow the rate of discharge, something that seems impossible to discern using any software utilities I could find. (Both coconutBattery and iStat Menus can report on power usage but not in a way that enabled me to see the difference when the jump starter was plugged in.)

Instead, I came up with this test, which, despite the photo, I didn’t actually perform in the back of the car. First, with the MacBook Pro running from its internal battery, I played a YouTube video in Google Chrome for an hour, noting that the battery charge dropped from 100% to 56%. Then I ran the test again, this time with the MacBook Pro plugged into the 15-watt Tacklife jump starter the entire time. For the second test, the MacBook Pro’s battery charge dropped from 100% to just 91%, a significant improvement. At the end, the jump starter was still showing three LEDs of capacity, but it showed two flashing when I started to recharge it, so I’d guess that it was about a third depleted. I can’t say for certain that the jump starter would have provided all the power the MacBook Pro needed for the track meet, but it certainly would have helped a great deal. 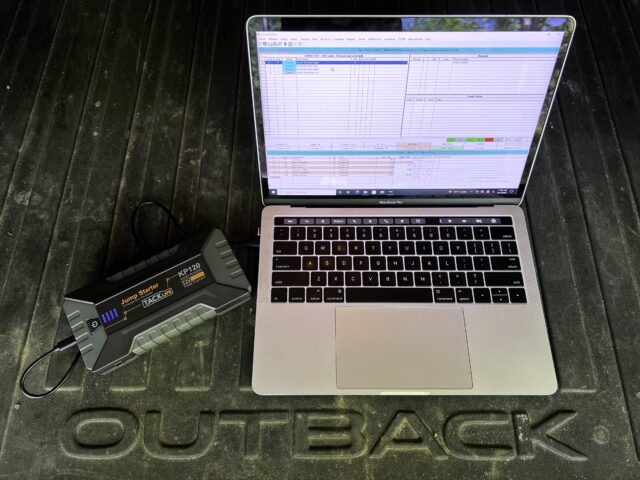 With luck, the TECKNET power station will run the MacBook Pro for the next track meet, along with any of our other battery-powered devices that might run out of power unexpectedly. But at least I know that the Tacklife jump starter is worth pulling out in a pinch.

If you can imagine needing to jump-start your car or charge digital devices while on the road, I highly recommend something like the Tacklife jump starter. Just make sure you have the appropriate cables—I’ve added a Lightning cable to the USB-C and micro-USB cables that came with mine.