OWC has specialized in creating innovative hardware accessories tailor-made for the Apple community for decades. The company recently sent our colleague Glenn Fleishman one of their new products, the OWC miniStack STX. But Glenn didn’t have any use for it and OWC didn’t want it back, so I wound up with it. It’s as puzzling as it is useful.

The OWC miniStack STX is two solutions in a single box. It’s a three-port Thunderbolt 4 hub that also offers storage expansion for your Mac via both internal SATA and NVMe connections. It’s designed with the Mac mini in mind, being built to the exact same shape and dimensions. The idea is that you put your Mac mini on top of the miniStack STX and connect it with an included Thunderbolt 4 cable to expand the Mac mini’s storage and connectivity. 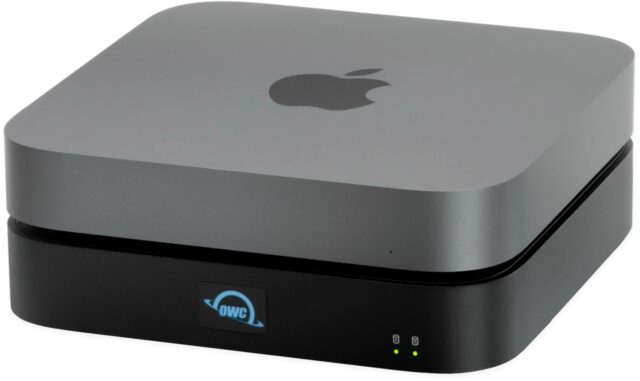 I don’t have a Mac mini, but I do have a 27-inch iMac that sits too low for my neck’s comfort. I previously propped the iMac up with a book, but the miniStack STX raises the iMac just as well, looks a little more professional, and solves another problem: my ever-growing Photos library. I’ve been struggling to keep enough free space on my iMac’s 1 TB of internal storage as my Photos library has ballooned to over 600 GB. I have several external hard drives kicking around, but they take up too much room on my already-crowded desk. I decided to put the miniStack STX to work.

The miniStack STX costs $279 with no storage, but you can pre-configure it with various SATA and NVMe storage configurations—up to 26 TB altogether. Or you can buy the miniStack STX on its own and add whatever drives you have lying around. The model Glenn sent me came with a 2 TB 7200 RPM hard drive, a configuration that lists for $349.

I was worried that the hard drive would be slow and loud, but I’ve been surprised by how quick and quiet it is. I moved my Photos library over in under an hour, and the only noise it makes is the quiet hum of its cooling fan.

Of course, you don’t have to use a hard drive. You could instead install a SATA SSD or an NVMe M.2 SSD module. When I catch a good sale, I plan on upgrading the miniStack STX’s storage to all flash. The SATA slot accommodates both 2.5-inch and 3.5-inch drives. OWC also includes its SoftRAID utility so you can combine the SATA and NVMe storage together into a RAID 1 configuration for redundancy.

I don’t have many Thunderbolt accessories, but I used one port to connect to my LG monitor via USB-C, which worked perfectly (for details on my monitor, see “LG 27UK850-W: An Acceptable 27-inch Display for the Mac” 18 December 2020). The miniStack STX supports up to two external displays on Intel-based Macs but only one when connected to M1 Macs.

One port must be connected to the Mac, which leaves three open ports on the miniStack STX. Those ports deliver a full 60 watts of power, so you could use one to fast charge an iPhone, or charge an iPad or MacBook Pro.

In theory, Thunderbolt 4’s bandwidth opens all sorts of possibilities for hubs and extra ports. In reality, it would be a mess of cables and dongles, which would defeat the purpose of the miniStack STX’s neat packaging. OWC missed an opportunity here. If the front of the miniStack STX sported a few USB-A ports and a headphone jack, it would be an easier sell. You can never have enough ports, and they’re hard to reach on Apple desktop Macs. 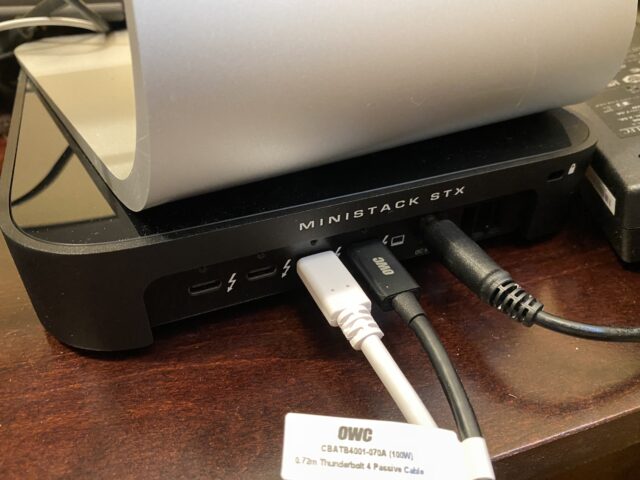 What problems does the miniStack STX solve?

While OWC explicitly designed the miniStack STX for the Mac mini, it fits well enough underneath my iMac, and it could also serve as a charging and Time Machine dock for a Mac laptop with an external display. (Note that the miniStack STX doesn’t support Thunderbolt 1 or 2, even with an adapter.)

Useful as it can be, the miniStack STX is a bit of a puzzle. It’s built specifically for a particular user: a Mac mini owner who needs extra storage and more Thunderbolt 4 ports. It’s a high-quality product, and I appreciate having it on my desk, but I wonder if OWC could have tweaked its industrial design and capabilities to better serve the needs of a broader subset of users. For instance, I could imagine optional plastic exoskeletons that would make it match the shape of iMac feet or support a Mac laptop, and a few additional ports on the front would be similarly welcome.