It’s official: the next Apple event will take place on 7 September 2022 at 10 AM PT. As always, you’ll be able to stream it from Apple’s website or on your Apple TV, and Apple makes it easy to add it to your calendar. If you have lots of spare time on your hands, you could speculate about what Apple intends by calling the event “Far Out,” or you could just wait for the actual event like we’re doing. 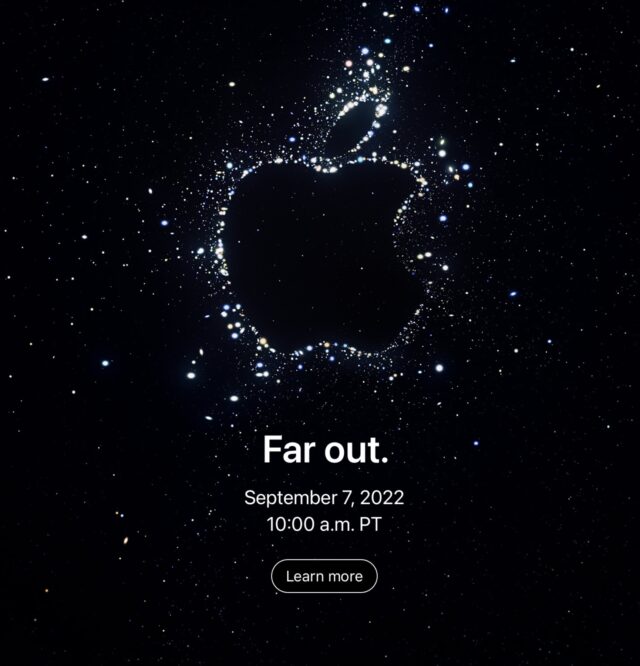 Traditionally, Apple announces new iPhones in September. This year’s rumor mill has focused on the Pro line and the possible addition of a plus-sized regular iPhone model with Pro features. Rumors are swirling about an iPhone 14 Pro that will replace the notch with a pinhole for the front-facing camera, feature an always-on display like recent Apple Watch models, and boast a 48-megapixel rear camera with a larger sensor. Talk surrounding the iPhone 14 suggests it will be a modest update using the same processor as the iPhone 13. As always, take such predictions with a grain of salt.

We also expect Apple will unveil the Apple Watch Series 8, possibly with a temperature sensor that could enable fever detection and fertility tracking. Also expected are a refreshed Apple Watch SE and a ruggedized Apple Watch Pro with a larger screen. Apple may also show the second generation of AirPods Pro with a new industrial design and a case that can play sounds to make it easier to locate with Find My.

Finally, Apple will almost certainly also announce launch dates for iOS 16 and watchOS 9. I am putting the finishing touches on the upcoming Take Control of iOS 16 and iPadOS 16, which I’ve been working on all summer.

However, don’t expect iPadOS 16 at the same time. Apple has confirmed that it will delay iPadOS 16’s release until after the release of iOS 16, with the initial iPadOS 16.1 perhaps joining macOS 13 Ventura in October. Apple is reportedly still ironing out wrinkles in the Stage Manager feature (see “First Impressions: Stage Manager on the iPad and Mac,” 18 July 2022).