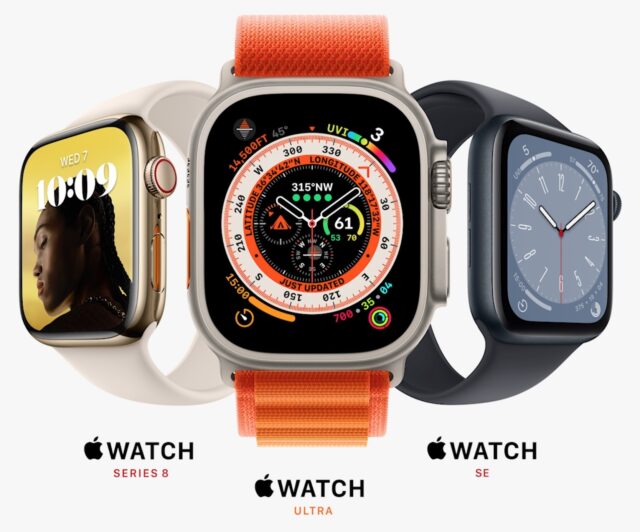 Improvements from the first-generation Apple Watch SE are few but welcome. Most notably, although it retains the 40mm or 44mm case sizes, the screen is reportedly 30% larger than the previous generation. Apple also upgraded it from the S5 chip that powered the Series 5 to the S8 chip that’s in this year’s Series 8 and Apple Watch Ultra. The company claims performance improvements of 20% from that switch. It gains the enhanced motion sensors that enable the other two new models to detect car crashes—more on that shortly. Finally, Apple said that the back case now uses a nylon composite material instead of ceramic—the change probably helps Apple keep the cost of materials down. 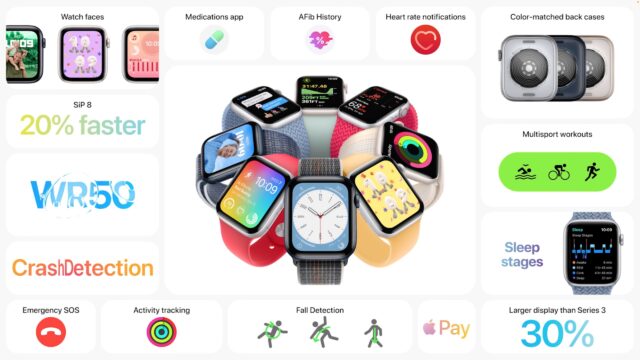 Other compromises to keep the cost low remain the same. The Apple Watch SE still lacks the more-capable models’ Always-On display, blood oxygen sensor, ECG capability, and fast charging, and it continues to rely on Apple’s second-generation heart rate sensor rather than the current third-generation model. Nor does it gain the new temperature sensor and IP6X dust resistance.

Don’t take that as dismissive—the Apple Watch SE is an excellent deal and all that most people need. It costs $249 for a GPS-only model or $299 for the GPS+Cellular model. The case is aluminum, and you can choose from midnight, starlight, and silver colors. 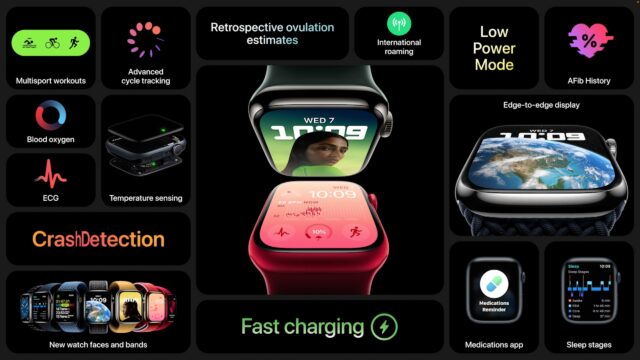 On the health side, the Series 8 introduces a new temperature sensor, which Apple leverages to enhance the Apple Watch’s Cycle Tracking capabilities. (There are actually two sensors, one on the back of the case and another under the screen, to help the Series 8 cancel out environmental temperature changes.) It tracks temperature changes during sleep, sampling every 5 seconds with a 0.1ºC sensitivity. For family planning purposes, the Cycle Tracking app analyzes this data to provide a retrospective estimate of when ovulation was likely, and it can also provide improved period predictions, along with notifications of possible cycle deviations.

Apropos of the US Supreme Court’s recent overturning of Roe v. Wade and subsequent concerns surrounding data privacy related to period-tracking apps, Apple emphasized its privacy protections for Cycle Tracking data, which is encrypted on your devices and synced with end-to-end encryption via iCloud, so not even Apple can access it.

While I applaud Apple for putting so much work and attention into improving Cycle Tracking with the temperature sensor data, I’m surprised the company isn’t also using that data for broader purposes. Perhaps other apps will fill this gap, but I’d like to see an app that could combine temperature and heart rate data to warn you that you might be falling ill—wouldn’t you like to know in advance if you had caught COVID-19? FDA approval is likely the stumbling block.

The big news on the safety front is that Apple has new and improved motion sensors that enable the Series 8—and the new Apple Watch SE and Apple Watch Ultra—to detect car crashes. The feature works only when you’re driving and triggers only in the time surrounding a crash, after which it asks you if you want it to activate Emergency SOS, just like the fall detection feature.

The sensors send a variety of data—deceleration, pressure, sound, etc.—to a machine-learning algorithm that Apple said had 1 million hours of training to detect crashes. Honestly, Apple made it sound very impressive, but it would seem that car crashes would be extreme enough to be easy to detect. And no, we’re not going to test this feature, though I’ll be curious how quickly we see false positives reported on the Internet.

The connectivity story is less compelling for most people, though jet-setters will appreciate it. With Apple Watch Series 8, you’ll be able to add your Apple Watch to an iPhone’s international roaming plan—likely for an additional fee—so your watch can maintain its cellular connectivity in other countries. Carriers will have to provide such plans, and I’m a bit dubious that it will be sufficiently easy and inexpensive to be worthwhile in most cases.

Apple also noted that a new Low Power Mode provides up to 36 hours of battery life on a full charge by disabling certain features. However, the company also said that Low Power Mode would be available on the Apple Watch Series 4 and later, meaning that it’s a watchOS 9 feature and not specific to the Series 8.

The Apple Watch Series 8 aluminum case comes in four colors—midnight, starlight, silver, and Product(RED)—and starts at $399 for GPS-only and $499 for GPS+Cellular. The more expensive stainless steel case comes in silver, gold, and graphite and starts at $699. There are a variety of new bands from Apple, Nike, and Hermés. 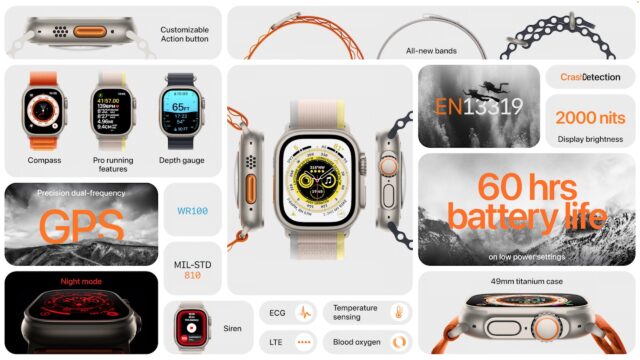 Featurewise, the Apple Watch Ultra is a superset of the Apple Watch Series 8, so it includes all the same sensors and base capabilities, and cellular connectivity is standard. But it goes much further. Most notably, the Apple Watch Ultra features a new orange Action button that apps can customize for their own purposes. Finally, an Apple Watch where you can start and stop a workout by pressing a button instead of trying to swipe on a screen with sweaty, trembling fingers! You’ll also be able to attach any shortcut you want to the Action button. The Digital Crown is larger, and the side button stands out from the case, both of which make the Apple Watch Ultra easier to control while wearing gloves, something that’s nearly impossible now.

The Apple Watch Ultra’s Action Button is powered by some awesome new App Intents APIs. You will be able to build your own apps to integrate with it, like a hockey app that uses the button to record goals! And for users, the button can kick off any Shortcut you want!

Other new hardware capabilities include a brighter Always-On display that Apple says is readable even in direct sunlight and a precision dual-frequency (L1 plus L5) GPS that works better in certain conditions—steep gorges, urban canyons—that often stymie GPS signals. It features an 86-decibel siren that can be heard up to 600 feet (180 meters) away and includes dual speakers and a three-mic array with beamforming for better audio output and input, even in windy conditions. There’s also a depth gauge and water temperature sensor.

That’s right—with the Oceanic+ app coming in a few months, the Apple Watch Ultra can double as a dive computer, meeting the European EN13319 standard for diving accessories. It’s water-resistant to 100 meters, though Apple qualifies that with “swimproof and recreational dive to 40m.” If the desert or tundra is more your thing, it’s certified to be IP6X dust resistant and tested to the US military standard MIL-STD 810H for altitude, high and low temperature, temperature shock, immersion, freeze/thaw, and vibration.

Apple is targeting extreme athletes, adventurers, and wannabes everywhere with the Apple Watch Ultra. It has twice the battery life of an Apple Watch Series 8 with up to 36 hours in normal usage and up to 60 hours with an extended battery optimization mode that Apple is promising for the future. You can see exactly who Apple thinks will buy the Apple Watch Ultra by the names of its bands: Alpine (nylon with a hook clasp), Ocean (a stretch elastomer with extensions to fit over wetsuits), and Trail (a nylon sport loop with a tab for easier adjusting).

It also includes a new Wayfinder watch face that displays a compass and has a Night mode that switches to red on black for easier reading in the dark. A redesigned Compass app provides multiple views, a backtrack capability to retrace your steps, and waypoints for easier navigation.

Frankly, it’s an impressive product, and I’m looking forward to seeing what app developers do to take advantage of the Apple Watch Ultra’s new capabilities, particularly the Action button. Rumors suggested that Apple might price it as high as $999, so it was a welcome surprise when the company announced that it would be only $799. That’s more than Garmin’s running/triathlon Forerunner series but less than Garmin’s adventure watches, though they boast 16 to 28 days of battery life.

The main thing that will give many people pause, particularly those who are smaller, is the raw size of the Apple Watch Ultra. If you’ve worn a 40mm Apple Watch SE so far, jumping to a 49mm Apple Watch Ultra that could be half again as thick is going to look ungainly. And I say this as someone who used to wear a goofy Garmin Forerunner 305.

Regardless of whether it’s ideal for everyone, the Apple Watch Ultra is a welcome addition to the Apple Watch line, and I’m sure many people have already placed their orders.