We’re pleased to welcome Rogue Amoeba back as a TidBITS sponsor for the next few issues. This month, Rogue Amoeba is celebrating its 20th anniversary, which is an awful lot of generations when you’re a single-celled organism. During that time, the company has extended its pseudopods deep into the world of Mac audio with a collection of apps for recording audio (Audio Hijack and Piezo), controlling and enhancing audio from devices and apps (SoundSource), streaming audio around your home or office (Airfoil), editing audio (Fission), routing audio between apps and devices (Loopback), and even adding canned audio to performances (Farrago).

Thanks to reasonable pricing and a desire to keep things straightforward, Rogue Amoeba almost never has sales. However, the company is making an exception for its 20th anniversary with a 20%-off sale—now’s your chance to add some additional apps to your Mac audio toolbox. You don’t need any coupon codes or special URLs to get this deal. Just visit Rogue Amoeba’s website to save 20% off any purchase. Act soon, though, because this sale ends with September.

What might you want to do with Rogue Amoeba’s apps? Apart from the obvious use cases core to each app, we wanted to share some of the weird and wonderful ways users have leveraged Airfoil, Loopback, and Farrago.

We admit that this is very much a first-world problem. Imagine you, like one very fortunate Rogue Amoeba user, have not one but two Studio Displays. You want to play your audio through the displays simultaneously, which is enough of a trick in itself. But you want to go further—you want the left stereo channel to come out of the left-hand Studio Display and the right stereo channel to emanate from the right-hand Studio Display. The solution? Loopback, which lets you create a virtual device, split the incoming audio into left and right channels, and direct each to a different Studio Display, playing each channel through both speakers in the displays. If I were doing this, I’d probably lower the volume on the two “inside” speakers (the right speaker on the left display and the left speaker on the right display) to account for the different distances. But sadly, I lack two Studio Displays. 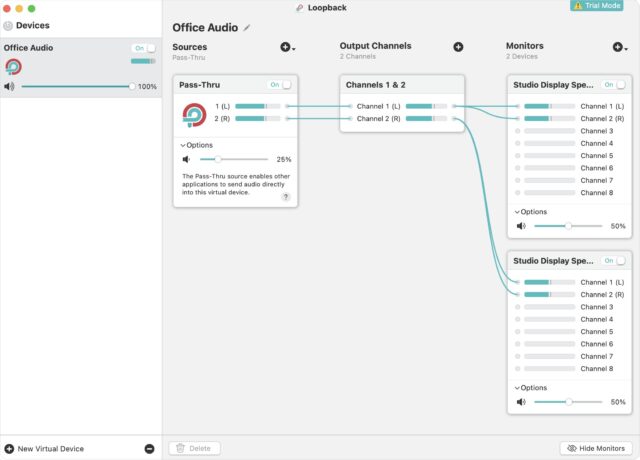 On Twitter, user “Boston” shared a short video showing a turntable playing audio through a thermostat. The video demonstrates how he connected the turntable to a Zoom Handy Recorder, which then fed the audio into an iMac Pro. That’s funky but mostly a matter of cabling. The unexpected part is that the Ecobee SmartThermostat can function as an AirPlay speaker, so Boston’s next step was to use Airfoil to route the incoming audio from his turntable over to his thermostat. What’s next, playing an 8-track tape through an AirTag?

@reckless I’m playing vinyl through an Ecobee thermostat right now and am starting to wonder if my whole existence is just a hypothetical Vergecast tangent. pic.twitter.com/AsqojxcDk0

It’s only a robot! In the HBO TV show The Rehearsal, Nathan Fielder helps people rehearse difficult conversations or life events by simulating them with sets and actors. In Episode 2, “Scion,” Fielder helps a woman considering motherhood by hiring child actors in order to simulate adopting and caring for a baby. However, due to Oregon child protection laws, the production must replace the real baby actors with a robot baby at night. (And a good thing, too!) Unsurprisingly, the robot baby cries frequently but authentically, a trick that the producers achieve by watching a live feed of a real baby crying and tapping buttons in the soundboard app Farrago to play different recordings (perhaps made with Audio Hijack?) of equivalent crying through the robot baby. 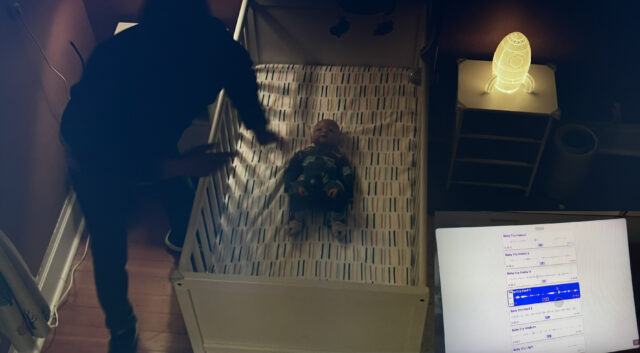 You’re researching whales (bear with me on this), and you need to monitor their songs (occasionally useful for saving the planet). For this, you use a hydrophone—a special microphone designed for picking up sounds in water, where sound travels about 4.4 times faster than in air. That’s easy enough, but what do you do with the audio signal you get out of the hydrophone? If you’re thinking like one marine biologist/Rogue Amoeba user, you send the audio into a Focusrite Scarlett 2i2 audio interface and then into an iMac. Where, of course, you feed it to Airfoil and transmit it around your office, er… ship to every device you have. There’s probably some recording with Audio Hijack going on too. Perhaps we should start broadcasting actual whale songs into space as well to offset Hollywood’s depictions.

Several other stories that Rogue Amoeba shared sounded cool if you’re an audio developer or professional who needs to route audio in unusual ways. For instance, if you need to test something against a 6-channel output device, Loopback is your friend. Another audio pro was having trouble with the digital audio workstation software Ableton stuttering due to relying too heavily on one or two CPU cores, even when there were 20 available. The workaround was to move the master chain to Reaper, another digital audio workstation app, and then connect the two using Loopback to be able to work on it in Ableton while listening to it through the master chain in Reaper. I fully admit that I have no idea what all that means, whereas I’m sure there are audio folks nodding their heads and thinking, “Huh. That’s an interesting solution.”

We certainly don’t expect you to read this article and think, “Wow, I need to record whale songs with Audio Hijack, set up a soundboard with Farrago, and tap buttons to play the songs through my thermostat using Airfoil.” But if you want to record a VoIP call, live performance, or Web stream and then work with that audio in many different ways, check out Rogue Amoeba’s apps.