iOS 16 is here, and the first thing you’ll notice is the new customizable Lock Screen. You can now create multiple Lock Screens, each with its own wallpaper, clock font, and widgets, and cycle through them much like Apple Watch faces. Beyond being able to increase the visual diversity of your iPhone experience, you can tie a Lock Screen to a Focus and switch your Focus by swapping Lock Screens. Similarly, the Lock Screen will automatically change to match if the Focus switches on its own, such as due to a time-based trigger.

Each Lock Screen can hold up to five monochromatic widgets. These are distinct from the Home Screen and Today View widgets, and they more closely resemble Apple Watch complications. They can display information like upcoming Calendar appointments, Apple Watch charge level, Activity rings, and temperature, and they can also offer shortcuts to actions in particular apps. Third-party developers can create Lock Screen widgets, but the selection is limited right now, and there are some bugs we’ll discuss.

Before you can customize a Lock Screen, you must create a new one by touching and holding the Lock Screen until it appears in the Lock Screen switcher, and then tap the blue plus button. (On an iPhone 14 Pro with the Always-On display, you have to make sure the screen is awake before you touch and hold, which Adam says is quite annoying.) 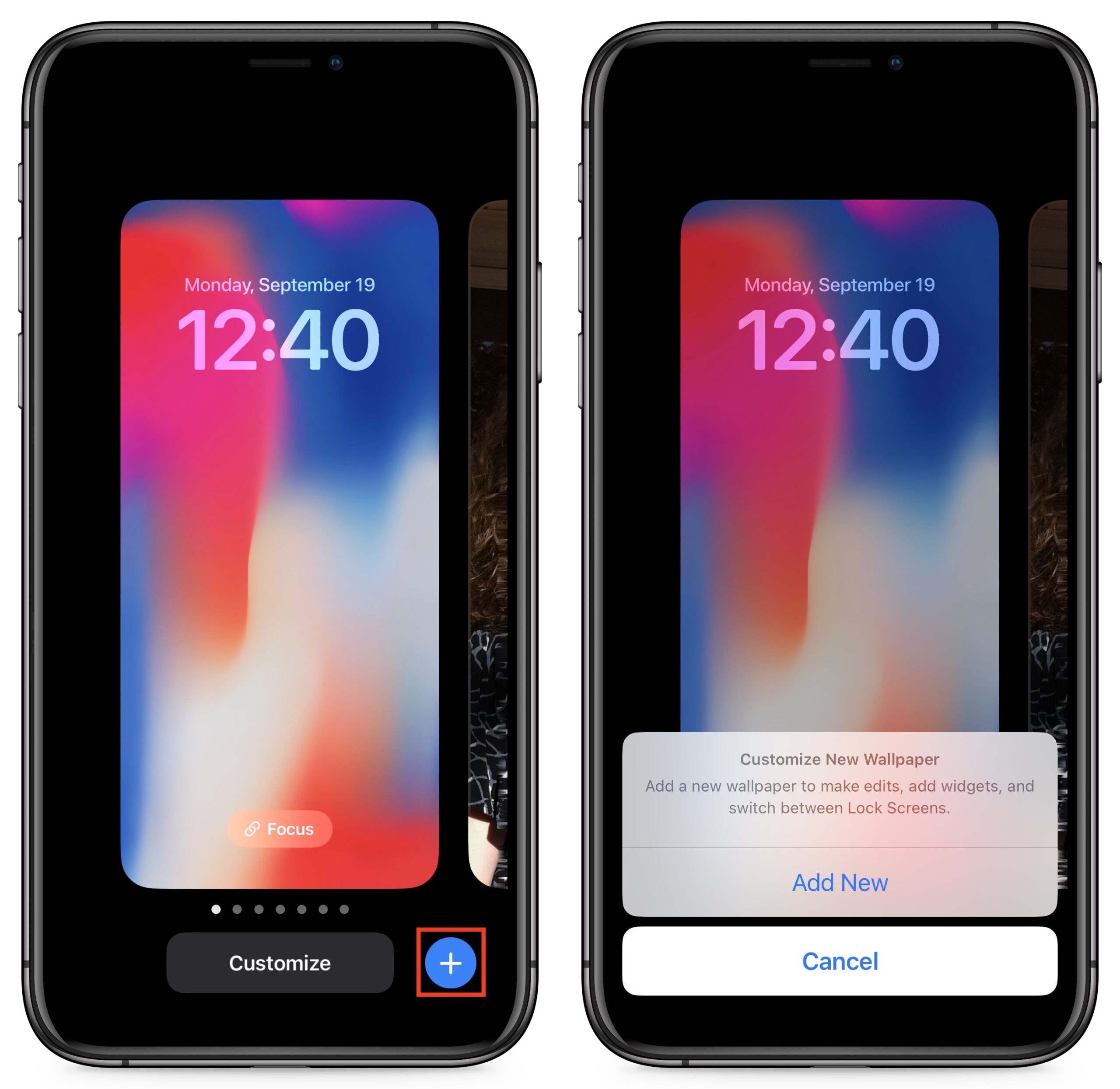 Later, you can return here and tap Customize to alter that Lock Screen’s settings. But let’s first talk about how to create a new Lock Screen.

When you first install iOS 16, you’re given only the regular default Lock Screen, which cannot be customized, though it does pick up your existing Lock Screen wallpaper. (That lack of customization is confusing numerous people; we wouldn’t be surprised to see an update to iOS 16 change it.) After tapping the blue plus button described above to create a new Lock Screen, you must first select a wallpaper type.

If you find the wallpaper selection Screen confusing, you’re not alone. Along the top is a horizontally scrolling list of buttons for the main types of Lock Screen wallpapers: Photos, People, Photo Shuffle, Emoji, Weather, Astronomy, and Color. Below that is a vertically scrolling gallery of Lock Screen wallpapers, some preconfigured with widgets. Confusingly, the Collections category is available only in the gallery, not among the buttons. 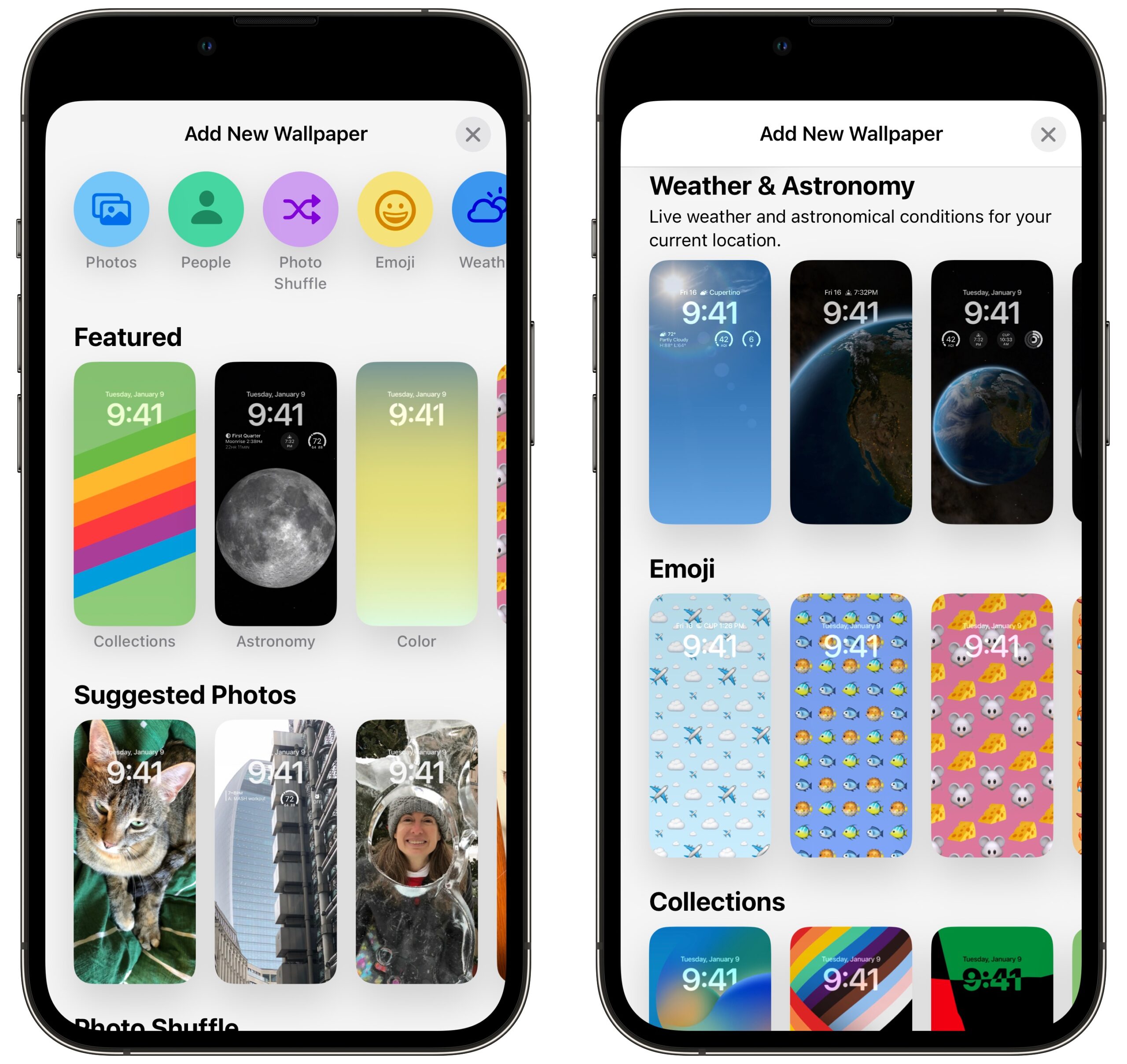 I encourage you to play with all the wallpapers and their options because the combinations are nearly endless. If you decide you don’t like a wallpaper, tap Cancel in the upper-left corner to try a different one. However, you can do this only while creating a new Lock Screen. If you’re returning to customize an existing Lock Screen, you can’t change the Lock Screen wallpaper type—you must instead create a new one.

Let’s look at each of the categories:

Choose the Clock Font and Color

Once your wallpaper is dialed in, tap the clock to bring up a panel that lets you choose the font and color. Apple offers only eight font options. A limited set of color options appear below the font choices; swipe all the way to the right to tap the color wheel that lets you choose whichever color you want with the Grid, Spectrum, or Slider pickers. You can tap the globe icon in the upper left to switch from standard Arabic numbers to Arabic Indic or Devanagari. 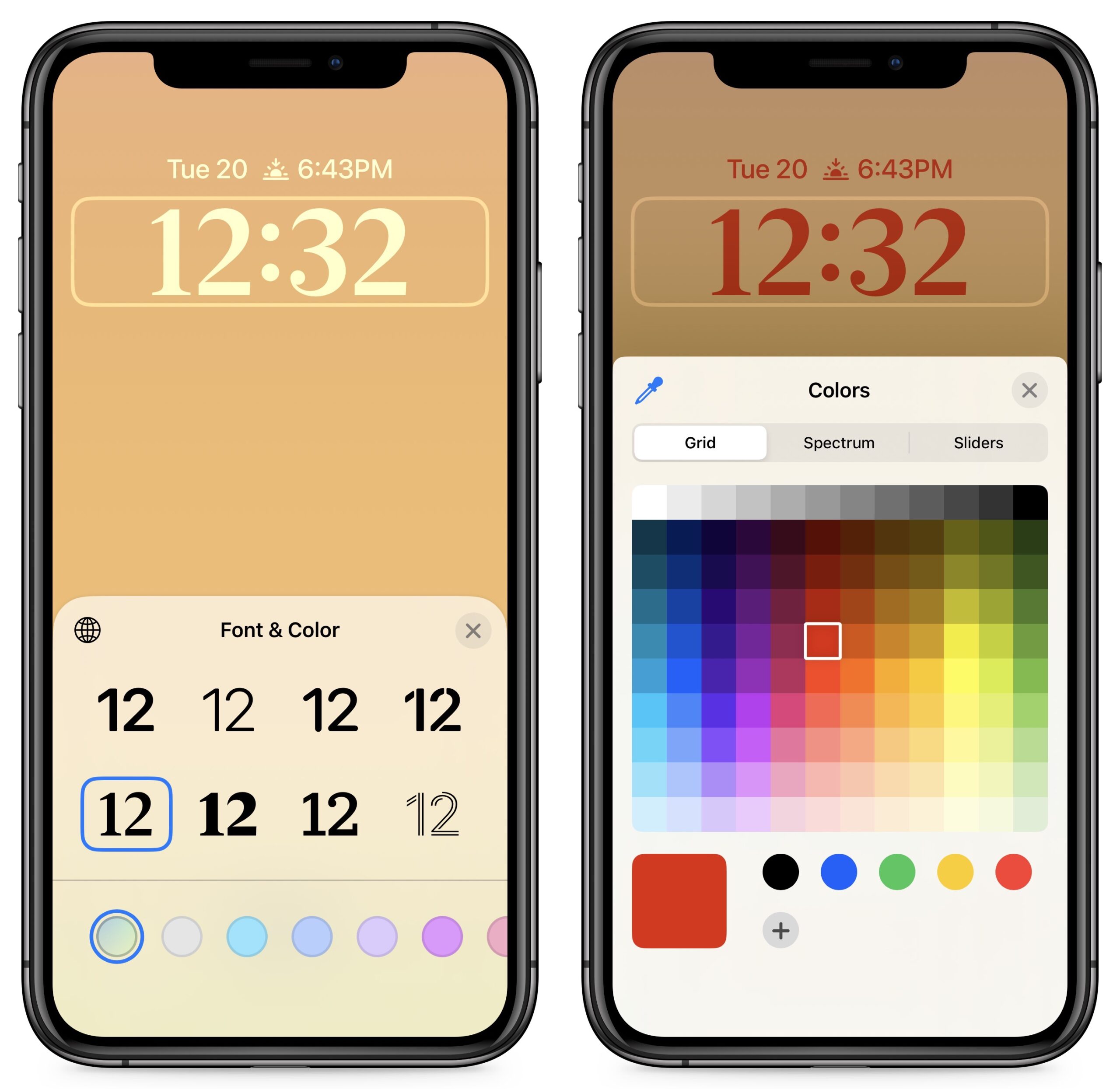 The Lock Screen becomes more functional when you add widgets, which has never before been possible. iOS 16 provides two distinct widget zones, a short one above the clock and a taller, wider spot below it. The two aren’t interchangeable—the widget zone above the clock holds only a single line of text or other controls, and it always displays alongside the date (which shrinks to make space) rather than replacing it.

To add up to four more widgets below the clock, tap the zone below it (conveniently labeled Add Widgets). I say “up to” because these widgets come in two sizes: small ones that take up one slot and large ones that occupy two slots. You can mix and match any way that fits—four small widgets, two large widgets, two small and one large—and there’s no requirement that you fill all four slots.

iOS 16 suggests widgets at the top of the Add Widgets panel but does not describe what each does. Instead, scroll down to view widgets by app, where tapping one offers a description of what it does. Many apps provide multiple widgets—swipe left to see more—and add the desired widget by tapping it or dragging it into the desired slot.

Once your widgets are in place, you can further configure them:

Something Broken with Widgets?

If you don’t see the third-party widgets you expect, it’s not your fault—there are bugs Apple has yet to stamp out. Many users and app developers are reporting that they do not see newly added widgets.

The developers of Hello Weather suggested uninstalling and reinstalling the app. I tried that but saw no difference. I also tried restarting both iPhones. That helped somewhat on the iPhone 11 Pro, with Todoist appearing alongside Things. But it made things worse on the iPhone 14, causing Todoist to vanish. The Halide team suggested temporarily changing your language in Settings > General > Language & Region to refresh the Lock Screen. I had no success with that workaround either. Adam Engst didn’t experience any of this weirdness, with the Agenda, CARROT Weather, Fantastical, Flighty, and Todoist widgets all appearing on his iPhone 13 Pro and iPhone 14 Pro once their apps were updated.

If you have problems, first make sure all your apps have updated in the App Store app—tap your avatar in the upper-right corner and then tap Update All. It’s also worth trying all the suggestions above. But you may just have to wait until Apple releases a fix. 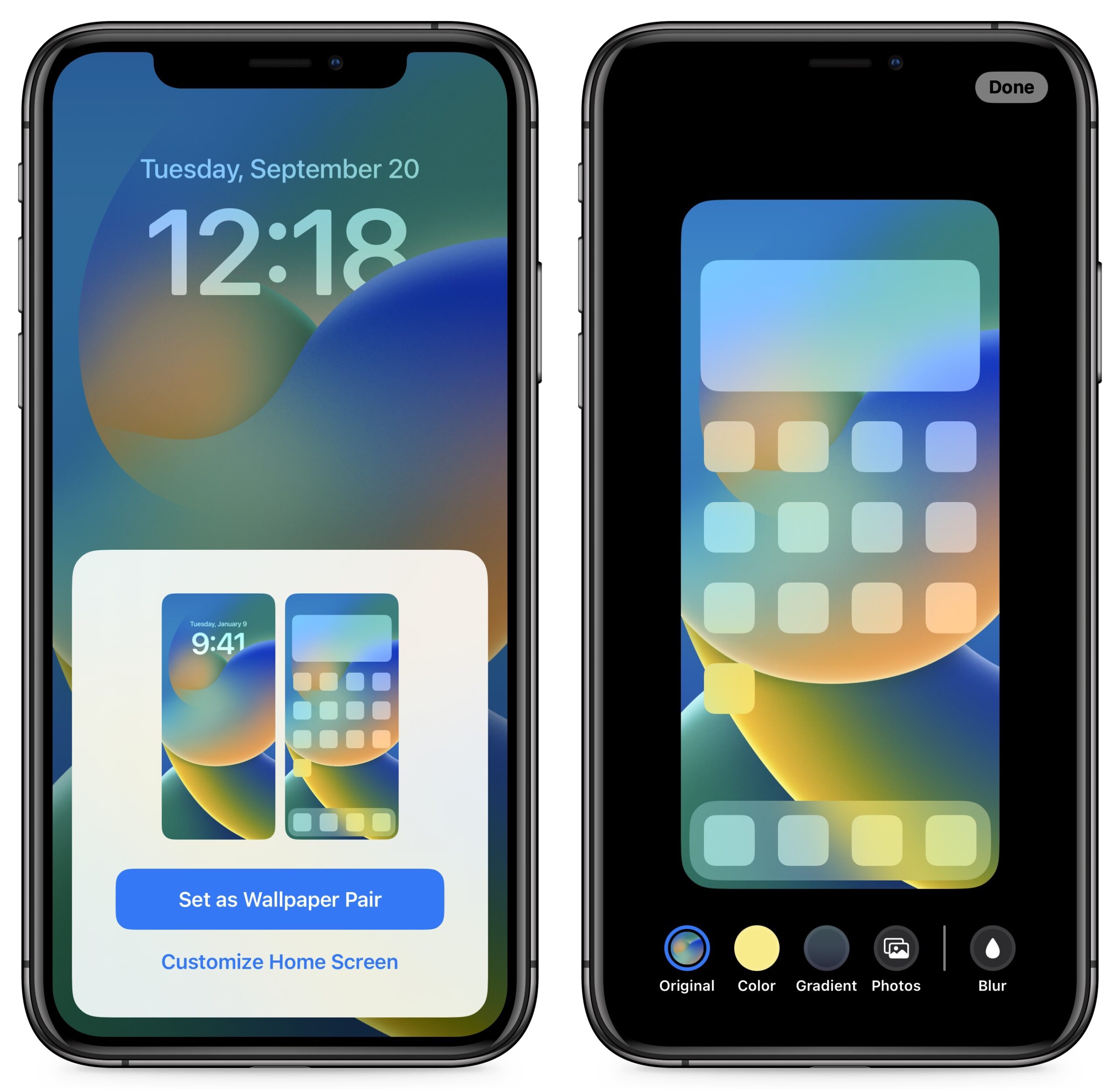 If you chose a photo, you can tap the Blur button to choose whether or not to blur it down to a single background color. I prefer the blur because it prevents the photo from detracting from app icons and text, but its utility depends on your chosen image.

Link a Focus to a Lock Screen

I’ll save a deep dive into Focus in iOS 16 for another time, but for now, let’s briefly discuss how you can link a Lock Screen to a Focus. After setting up a custom Lock Screen, touch and hold the Lock Screen to open the switcher. (If necessary, switch to a different Lock Screen; you can’t link a Focus to your default Lock Screen.) You should see a Focus button toward the bottom. Tap it, and you’re presented with a list of your Focus modes—tap one to connect it to that Lock Screen. 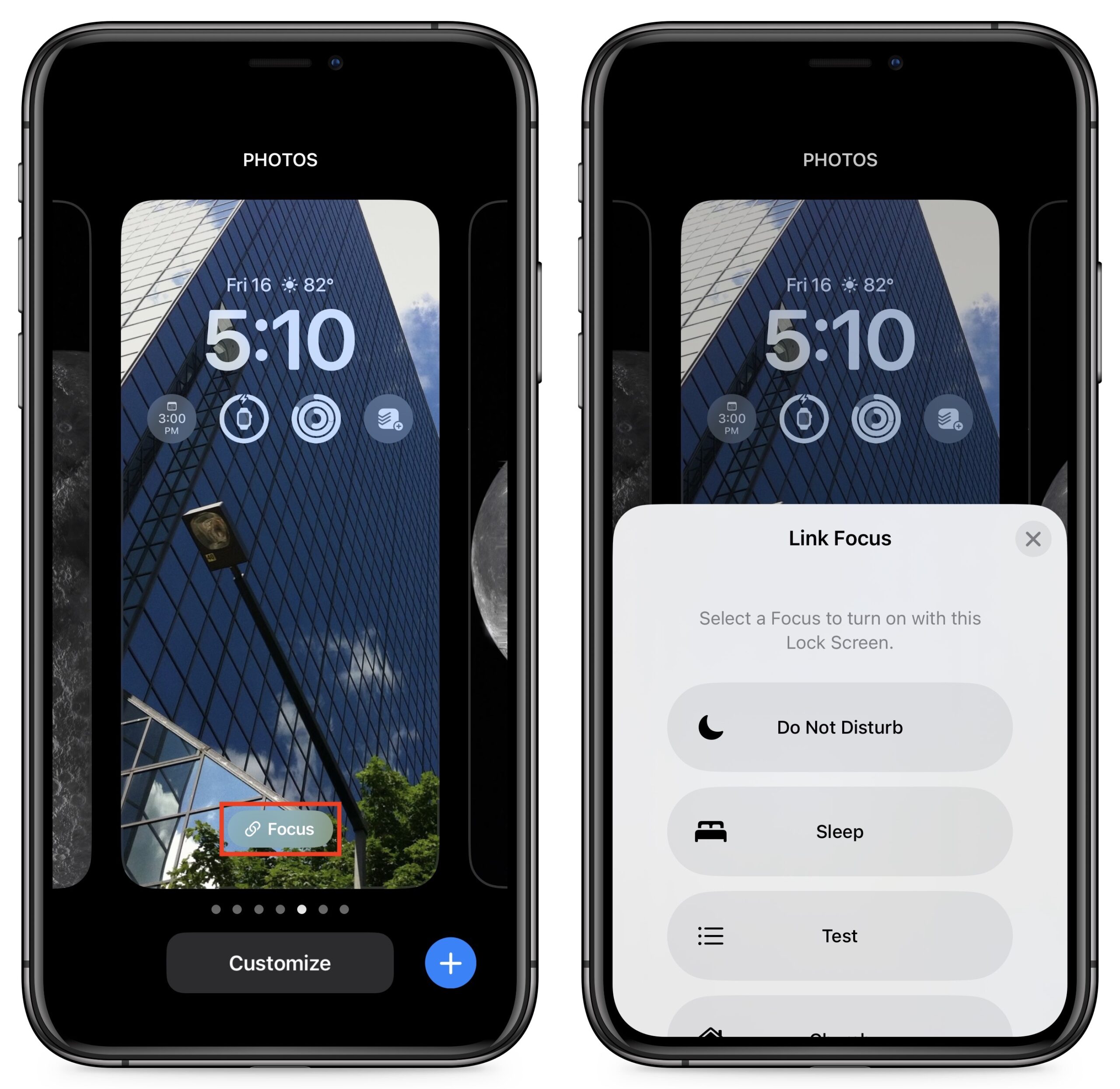 One Lock Screen must remain unlinked; that’s the one that becomes active if no Focus is engaged.

We see two likely scenarios for creating and switching among multiple Lock Screens. First, just as with the Apple Watch, you may enjoy the visual diversity that the feature provides. Second, if you rely on Focus, you’ll likely both switch Lock Screens manually and discover that Focus has switched them for you automatically.

To switch between Lock Screens manually, touch and hold the Lock Screen until the switcher appears, swipe to the one you want to use, and tap it to make it active. Remember, if you have linked a Focus to a Lock Screen, switching to that Lock Screen automatically activates that Focus, so make sure that’s what you want.

Everything we’ve done so far has been in the context of adding new Lock Screens. But you don’t have to get everything right on your first pass. When you touch and hold the Lock Screen to enter the switcher, you can tap Customize to tweak a Lock Screen’s settings, which include changing photos, selecting different widgets, and adjusting the font and color of the clock.

What you can’t do is change a Lock Screen’s wallpaper type, so if you’re customizing an Astronomy Lock Screen, for instance, you can switch among the different views of the Earth and Moon, but you can’t turn it into an Emoji Lock Screen. That’s a minor limitation, but it’s easy enough to delete a Lock Screen and create a new one.

Speaking of which, deleting a Lock Screen is simple: 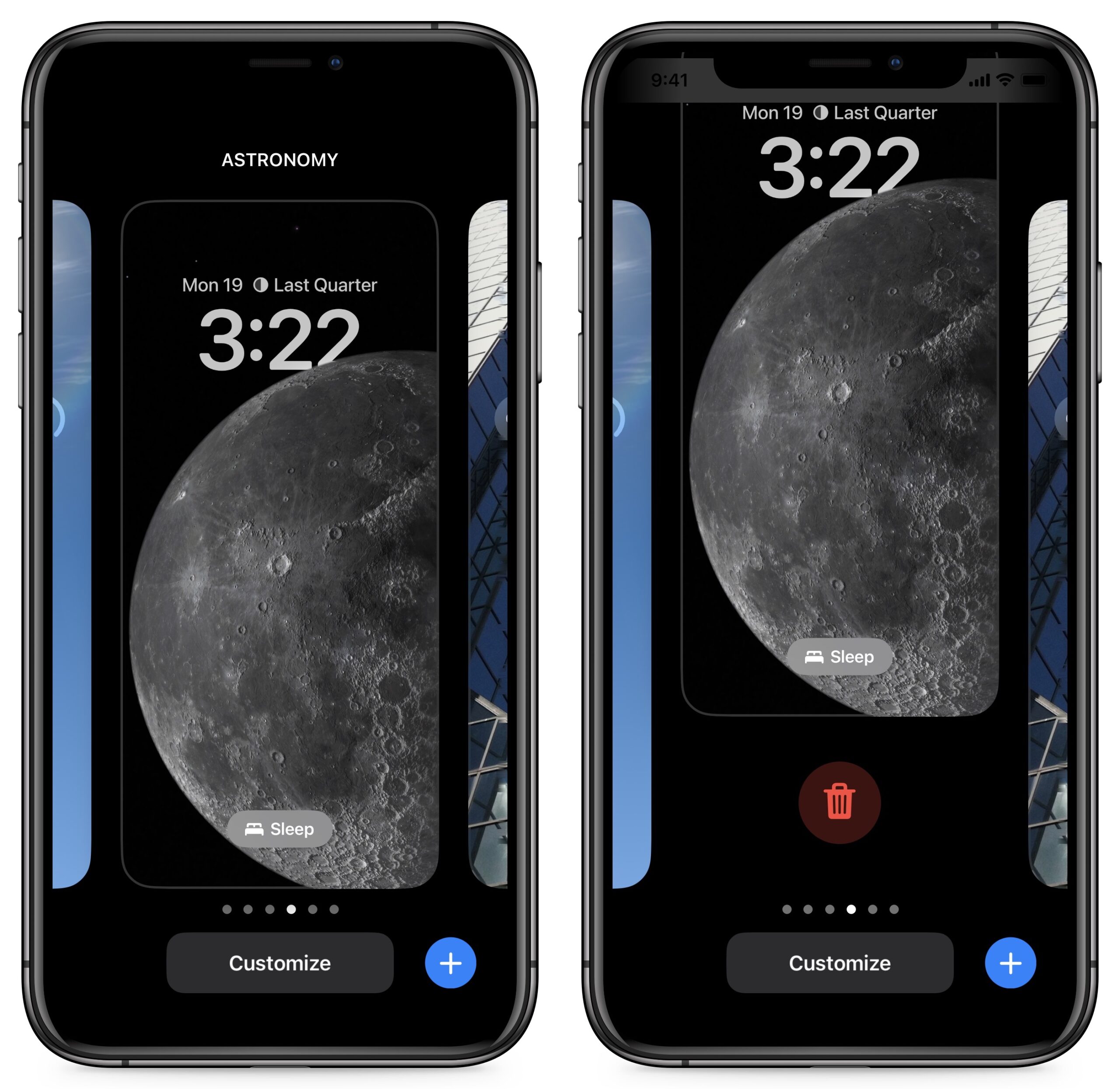 If you’ve updated to iOS 16, what’s your opinion of the new customizable Lock Screens? Which wallpaper style is your favorite? Have you created multiple Lock Screens, and if so, did you do so just for variety, or is each one linked to a different Focus?

Comments About How to Customize Your Lock Screen in iOS 16