I always thought the Apple Watch’s Power Reserve mode was lame. watchOS would offer to enable it when the charge level dropped to 10%, but once it was on, the Apple Watch could do nothing more than display the time. You couldn’t even get out of it without charging or restarting the watch. As my Apple Watch Series 5 has aged, I’ve been getting—and ignoring—those Power Reserve prompts more frequently over the last few months.

watchOS 9’s new Low Power Mode has thus been a revelation. It no longer dumbs down Apple’s smartwatch but merely disables some less-necessary features and reduces performance. Your situation may vary, but when I’ve used Low Power Mode on my Apple Watch Series 5, I know it’s active only because it turns off the Always-On display, showing the screen when I raise my wrist. For those models without a telltale Always-On display, Low Power Mode also puts a yellow status circle in the top center of the screen.

The most common way you’ll enable Low Power Mode is by agreeing to turn it on when the battery goes below 10%. When you flip that switch, watchOS 9 briefly explains its reduced functionality and then lets you turn Low Power Mode on (until the Apple Watch reaches 80% in the next charging session) or turn it on for 1, 2, or 3 days. On the face of it, turning it on for multiple days makes little sense—if your watch has just 10% battery life left, it’s not going to last for a full day, much less three.

Even for a relatively new Apple Watch starting with a full battery, it’s unclear how useful turning Low Power Mode on for multiple days will be, although it does stick through charging cycles, so enabling it for multiple days lets you avoid toggling it manually after each charge. The feature may be most suited to the Apple Watch Ultra, which could see multi-day performance in Low Power Mode.

What functionality will you lose when in Low Power Mode? Apple provides a detailed list of the features that Low Power Mode affects. First, it turns off these features entirely:

The big win here is reportedly turning off the Always-On display. The Apple Watch Series 4 and both generations of the Apple Watch SE lack that feature, so they may not benefit as much from Low Power Mode as other models.

If your iPhone isn’t close—when the Apple Watch might need to be using more battery power to search for nearby wireless networks and cellular connections—Low Power Mode also turns off these features:

However, it’s not quite that simple. If your watch is in Low Power Mode without its companion iPhone available and you open an app that requires a data connection, watchOS 9 turns on the Wi-Fi or cellular radios so the app works. That’s good—rendering apps in direct use dysfunctional is a poor user experience—but it will likely drain the battery quickly. Also, although you won’t be notified of incoming phone calls and notifications as they come in, watchOS 9 will periodically retrieve missed calls and notifications.

Finally, Low Power Mode reduces the performance of these features:

Frankly, these seem like entirely reasonable tradeoffs for longer battery life. I haven’t noticed any real-world effects from them, but that’s undoubtedly connected to how I use the Apple Watch. Your mileage may vary. 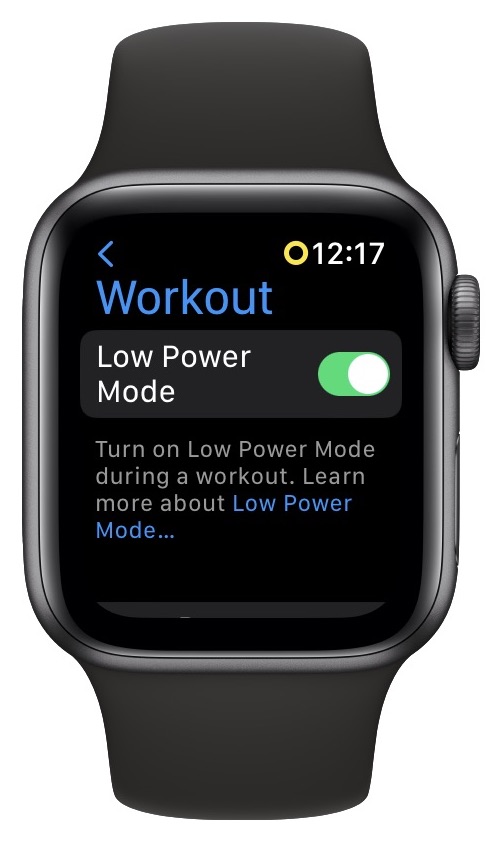 There’s one big carve-out from the disabled functionality: the Workout app. When you’re using the Workout app while in Low Power Mode, it still measures metrics like heart rate and pace, which are essential. It also still uses GPS to record where you’ve been, another core feature. So, on the one hand, using Workout in Low Power Mode will consume more power than other apps, but with the benefit of Workout behaving normally.

On the other hand, when you’re in a workout, you’re unlikely to be doing much else on your Apple Watch—so much so that watchOS 9 has added an option to enter Low Power Mode automatically whenever you start a workout. On the Apple Watch, go to Settings > Workout and enable the Low Power Mode switch. For many people, this is probably a sensible setting.

How Effective Is Low Power Mode?

The question in the front of the room with its hand raised is: “How much of a difference does Low Power Mode actually make?” It’s difficult to make a general pronouncement on that topic because it will undoubtedly depend on how old your particular Apple Watch is, its battery capacity, how much of the day it’s in proximity to your iPhone, how you use it during a particular day, and even how often you raise your wrist to check the time or look at a complication.

All that waffling out of the way, when I first turned Low Power Mode on at the beginning of a day, my Apple Watch Series 5 went from having about 10% of battery life remaining at the end of the day to 29%. Not bad, but it paled in comparison with three subsequent tests, which ended the day at 50%, 58%, and 34% (that last one included a 19-minute workout).

If my 20–50% improvement does apply more generally, that’s huge. It could extend the useful lifespan of an older Apple Watch for quite some time, assuming you were willing to live with the loss of functionality in Low Power Mode—most notably the loss of the Always-On display and background heart health monitoring. For many people, that might be worth delaying a $79 battery replacement or a new Apple Watch that would cost at least $249.