Since joining TidBITS, my email has been a hot mess. Like any tech journalist, I’m flooded with a constant stream of irrelevant PR and sales pitches that have rendered my email nigh unusable. As a result, I miss important emails from real people, leading to lost opportunities and annoyed readers. Forget “inbox zero.” My email is more like “inbox 600,000.” No amount of filtering or deleting has been able to tame the flood. Until I tried SaneBox (use that link for a $25 discount).

SaneBox is an add-on service for any email account that adds powerful custom filtering. It’s more powerful and granular than a spam filter, and it’s much smarter and easier to manage than email filters in clients like Apple Mail and Gmail.

Here’s how it works: you provide SaneBox with your email login (which also gives SaneBox access to your email—you have to be comfortable with that), and it creates special folders for different features that automatically sort your email. SaneBox can cordon off emails you don’t want, keep newsletters in their own folder, remind you of emails at later dates, and many other things.

I wish I had signed up for SaneBox years ago, but let me explain why I didn’t.

I’ve heard people raving about SaneBox for years but was put off by its pricing model. Not by the price necessarily, which ranges from $24 to $299 per year (or $7 to $36 if you pay monthly), but by the way the tiers work.

In most subscription services, you pay a set amount per month and get all features, or at least a certain subset at different tiers. However, with SaneBox, you get a fixed number of features—which you choose—that you can activate at any given time. If you pay for six features and want to use a seventh, you have to turn off one of the features in use or pay more.

I found that vexing because I didn’t know what features I would need or how many. Thankfully, the two-week free trial lets you test all the features so you can figure out which you find useful.

Here are the available tiers:

I currently subscribe to the Lunch tier, albeit somewhat reluctantly, since I primarily use only three features, and I paid for two years in advance since it’s the most cost-effective option.

However, if your budget is tight, there’s only one feature you really need.

A Black Hole for Unwanted Email

SaneBox’s killer feature is the SaneBlackHole folder, which stores unwanted emails for 7 days before moving them to the trash. When you move one message from a particular sender to the SaneBlackHole, every email from that sender—past and future—goes into that folder. It makes inbox management so much easier since you don’t have to delete messages repeatedly, hope an unsubscribe link works, or set up custom filtering rules.

The genius of SaneBlackHole is if you move a message to it but later decide you’ve made a mistake, you can move any email from that sender back to the inbox and all the rest of that sender’s messages return along with it. If you ever make a huge mistake, SaneBox has a Reset Trainings feature that lets you undo the trainings you made between two dates, bringing back everything that you’d sent to SaneBlackHole during that time. 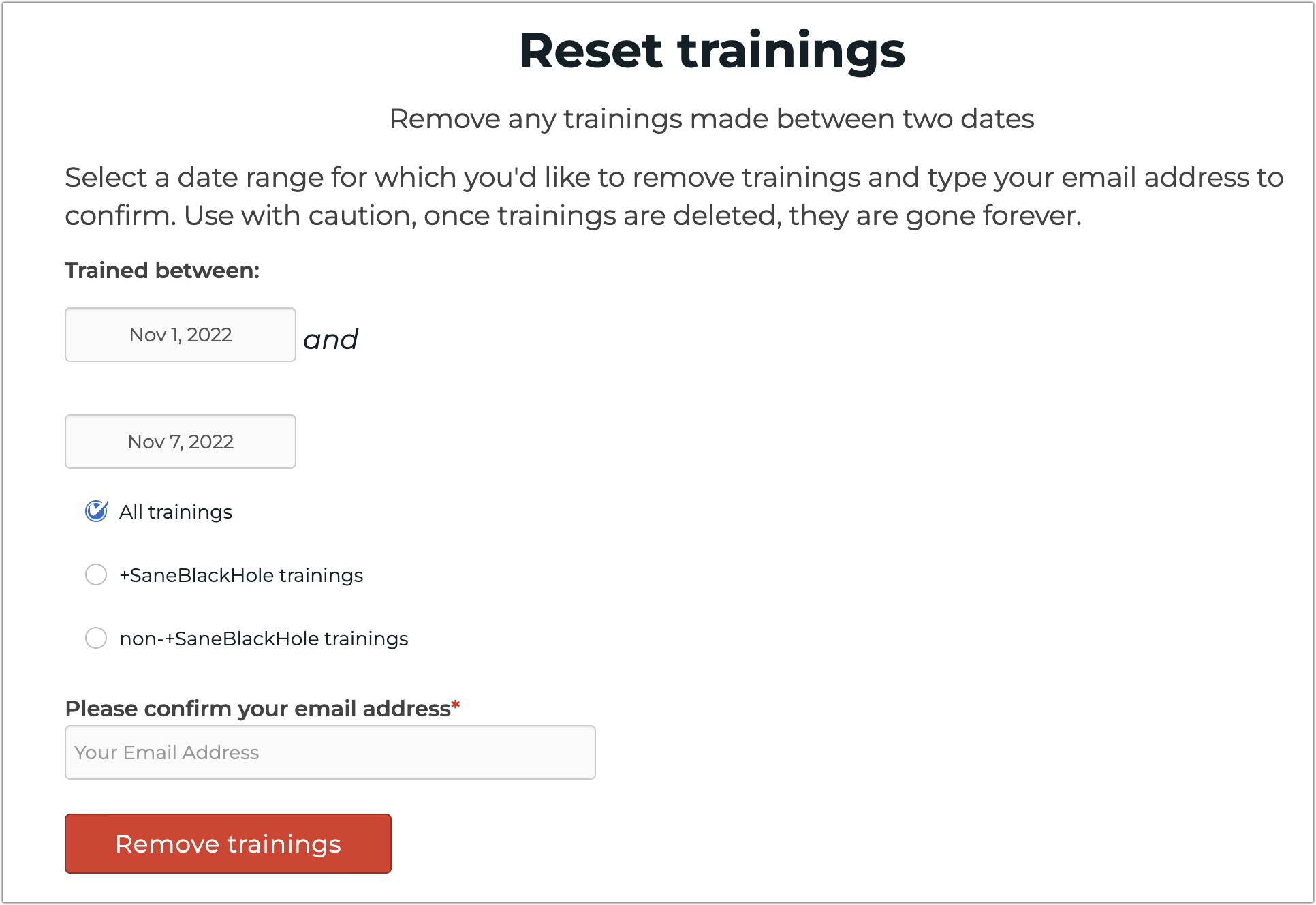 The other nice thing about SaneBlackHole is it holds messages for a week before deleting them, so you can also add things to it that you may want to see but are of value for only a limited time, like sale notices from online retailers.

You can mass train SaneBlackHole in one sitting, either through the website or the companion iOS app. I don’t always like the suggestions, so I spent some time at the beginning of my trial moving PR and sales spam to the SaneBlackHole folder. 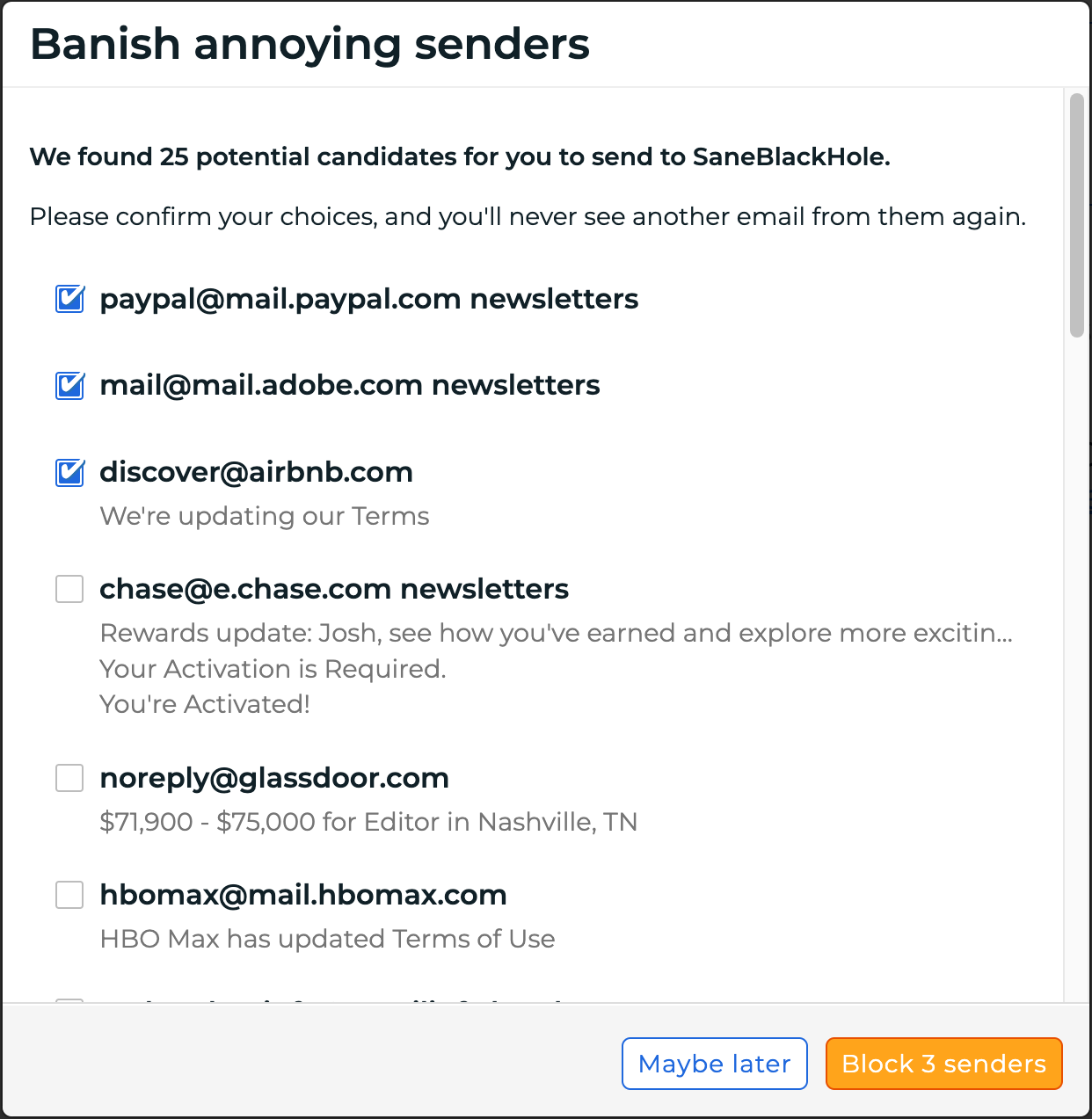 I was initially skeptical of the SaneBlackHole feature, but it works amazingly well. Only emails I have designated for the SaneBlackHole go there, nothing more and nothing less. It has done wonders to make my inbox usable again and let me delete a number of Fastmail filters and extra folders I was using to tame my email.

Since you choose your SaneBox features, your SaneBox experience is highly personal. I’ll discuss the other features I use and briefly describe what else it can do.

The SaneBox feature I use most beyond SaneBlackHole is SaneNews, which corrals email messages from newsletters and mailing lists. Overall, it does a good job, but I find a lot of unwanted junk there that I have to move to SaneBlackHole.

Sanebox lets you create custom DIY folders based on your own criteria. However, each one you create counts against your feature count, so I haven’t used them extensively. One that I do use was suggested by SaneBox when I set up my account: SaneReceipts, which rounds up order confirmations, payment confirmations, shipping notices, renewal messages, and other such things. That’s helpful.

Since I paid for six features, I also turned on SaneNoReplies, which is supposed to collect every email you’ve sent that has not received a reply. But for reasons I don’t quite understand, my unreplied emails don’t show up there. I need to work with support to figure out what’s going on, but I don’t recommend it for now. It may not be necessary for Apple users anyway, now that Mail in iOS 16, iPadOS 16, and macOS 13 Ventura has a follow-up feature that attempts to do the same thing.

Other features of SaneBox that I haven’t used include the following:

In addition to the features, SaneBox provides several tools to all subscribers for free:

A Power Tool for Email

Let me set some realistic expectations about SaneBox: while it’s a powerful automation tool for cleaning up your email, it still requires quite a bit of manual intervention. If deleting messages manually is like chopping trees with an axe and email filters are like using a chainsaw, then SaneBox is like a tree harvester. It still requires some time and effort, but SaneBox helps you do the job much faster than anything else I’ve tried.

If you’re drowning in email, give SaneBox a try with a two-week trial. Don’t be like me and make yourself miserable for years to save a buck. (However, you will save $25 with our link.)

Comments About Regain Control of Your Inbox with SaneBox