When I think about how technology as a whole has improved my life and the lives of people around me, I tend to focus on things like the development of vaccines, the improvement of chemotherapy and other oncology treatments, and emergency tools like the Apple Watch’s fall detection and automated notifications of dangerous weather conditions.

If I instead ponder how technology has enhanced my happiness, the list is far shorter. I enjoy the quality of photography modern iPhones are capable of. I’m glad to have FaceTime, Zoom, and other videoconferencing tools to connect with family and friends. While Twitter and other social media are decidedly mixed bags, I’ve made new connections with people, and that was especially important for my mental well-being during the pandemic.

But what about pure joy? I’d have been hard-pressed to give you an answer to that until Apple let us add the Photos widget to the Home Screen in iOS 14 and iPadOS 15 and use Photo Shuffle as a Lock Screen wallpaper option in iOS 16. I have the Photos widget on my first Home Screen, and I created a custom Photo Shuffle for my Lock Screen as soon as I started using iOS 16. If only Apple could extend this sort of machine learning to the My Photos screensaver on the Apple TV.

My favorite thing each morning is to see what photo appears in the Photos widget on my Home Screen. That widget shows entries from the For You section in Photos. You might see an entry from Memories, the AI-generated oddball collections that might include “Exploring Pittsburgh over the years” or “On this date.” 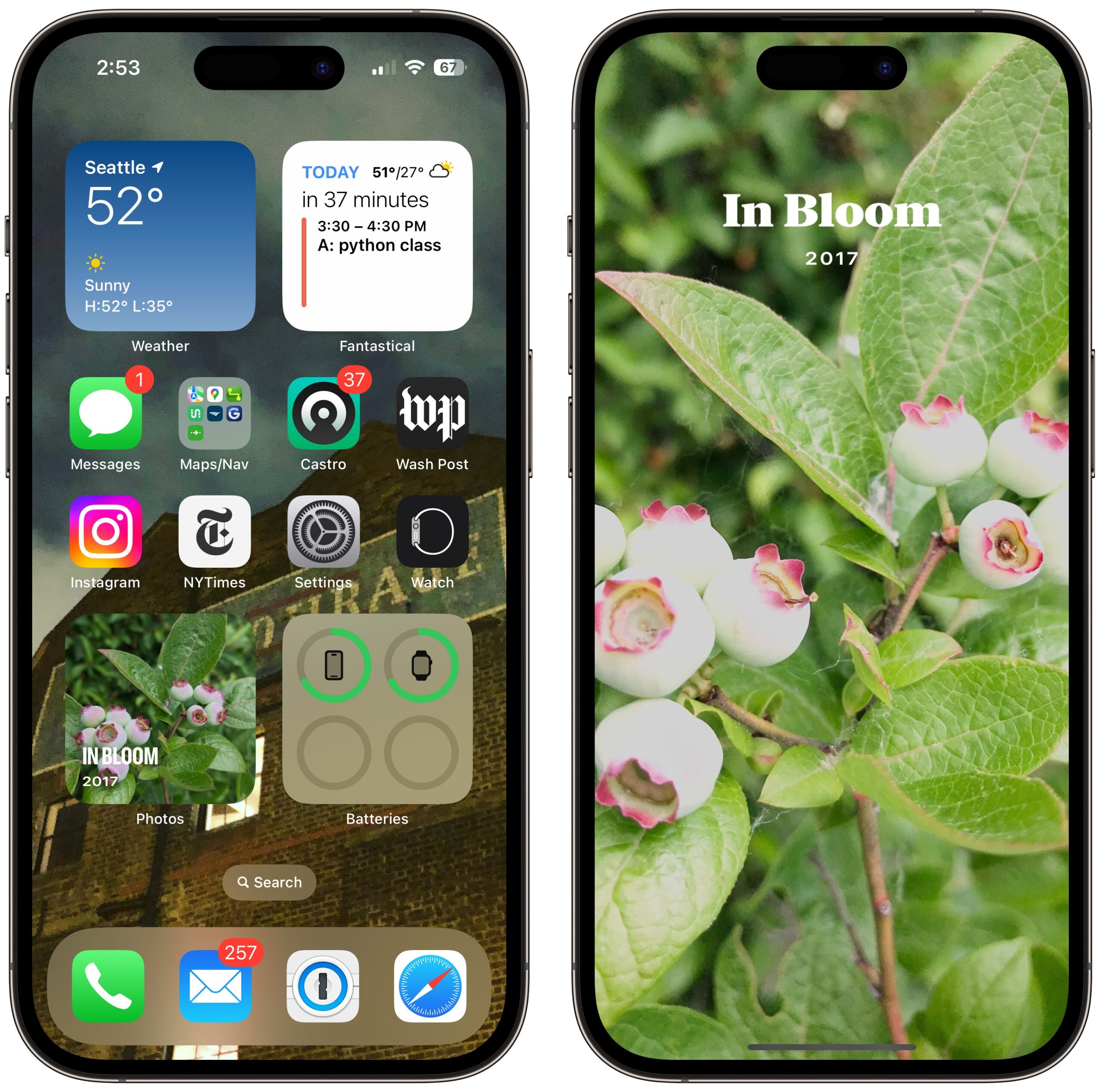 But I most often see one of my Featured Photos, which I prefer. Featured Photos is a small, ephemeral album iOS assembles for me every day. Featured Photos nearly always contains 10 to 20 images of happy or interesting snapshots from my life, typically featuring my children.

Featured Photos, like Memories, relies on some kind of machine-learning algorithm that Apple doesn’t describe. But I think it’s far more successful than Memories, which sometimes shows me slideshows of weirdly disconnected or boring images. You can’t push photos into a Featured Photos stack, although you can remove them. With an image showing in the Featured Photos collection in For You, tap the ••• icon in the upper-right corner and tap Feature This Person Less or Remove from Featured Photos. The latter ensures you won’t see that photo in rotation anymore.

Both Memories and Featured Photos have the potential to induce sadness or grief, of course. All technology companies should have learned a lesson from Eric Meyer’s 2014 experience with Facebook, which rolled out a Year in Review feature that mindlessly showed him images of his six-year-old daughter Rebecca, who had died of brain cancer that year. Some smart companies brought Eric in to talk about the topic in the hope that his experience could help their products avoid this tragic error. (Rebecca’s life is commemorated with rebeccapurple, an official CSS4 color name.)

Apple seems to have figured out some way of avoiding this. My life isn’t full of death, disaster, and disagreement. But I have digitized nearly all photos I’ve taken over the last 40 of my mumblety-mumble years, including images of past romantic partners, broken or neglected friendships, and people I care about who have died. I rarely see anything from that data set, despite not having purged images from my Photos library that might, out of context, cause pain. The closest are photos of my mother with my kids that appear regularly, but not too frequently. She died in 2009. I find those images wistful, sweet, and a nice way to remember her in life.

I assume Apple’s machine-learning system relies on signals stored locally and synced across my photo libraries. It knows who I’ve identified in the People album; I don’t add people I want to forget. I assume Photos tracks how many times I view images and videos, and it knows which I’ve marked as favorites. And I occasionally do note that a photo should be removed from Featured Photos. Perhaps that’s enough.

iOS 16’s new Lock Screen Photo Shuffle feature has a different design that’s also random but much more focused. When setting up Photo Shuffle as your Lock Screen wallpaper, you can pick Shuffle Categories: People, Pets, Nature, and Cities. With People, you’re presented with a subset of your People album and can select the people you want to see regularly. I expect Apple structured these choices to further constrain the appearance of unwanted images, which are less likely to be tolerable on the Lock Screen. You can remove troublesome photos, too, though it’s a slog: in the Frequency options hidden behind the ••• icon, select Don’t Feature Photo to remove it from future shuffled photos. 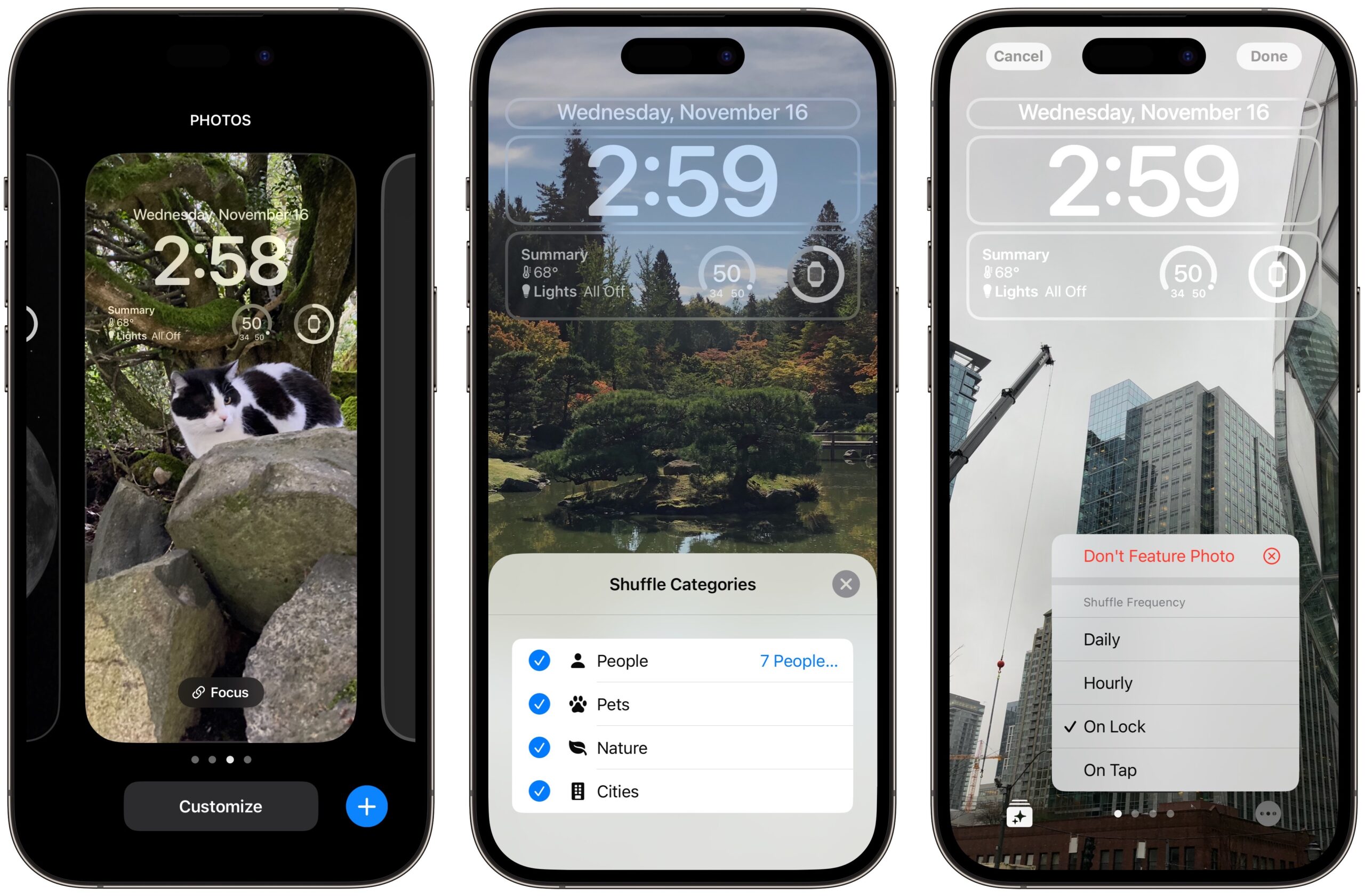 Although you can swipe through “all” the featured photos when customizing Photo Shuffle to start, it will add photos to the collection over time, so you may occasionally have to customize that Lock Screen again to remove an undesirable photo that the algorithm has chosen after your initial setup.

I set Photo Shuffle’s frequency to the ridiculous update schedule of On Lock. Every time my iPhone lights up with an incoming alert, I raise it to view, or I press the Standby button, I get a new image. Weeks into using it, I haven’t even begun to tire of the random presentation of photos of the people I love across decades of my life.

It turns out you can design a product to produce joy. Apple has chosen to hide the details of how it engineered this kind of delight, and that unpredictability might just be a key aspect of the pleasure of continuous rediscovery.