For the last few weeks, whenever I launch Brave, my primary Web browser, I’ve been getting a dialog from Google Hangouts, alerting me that Google has replaced Hangouts with Google Chat. This isn’t news—Google first mentioned this would happen in an October 2020 announcement and provided more details in a June 2022 post. And, of course, the dialog provides a Learn More link for additional details. Moving to Google Chat isn’t the problem—I’ve been using it for some time now with the one person in my extended network who doesn’t use iMessage, SMS, or Slack. 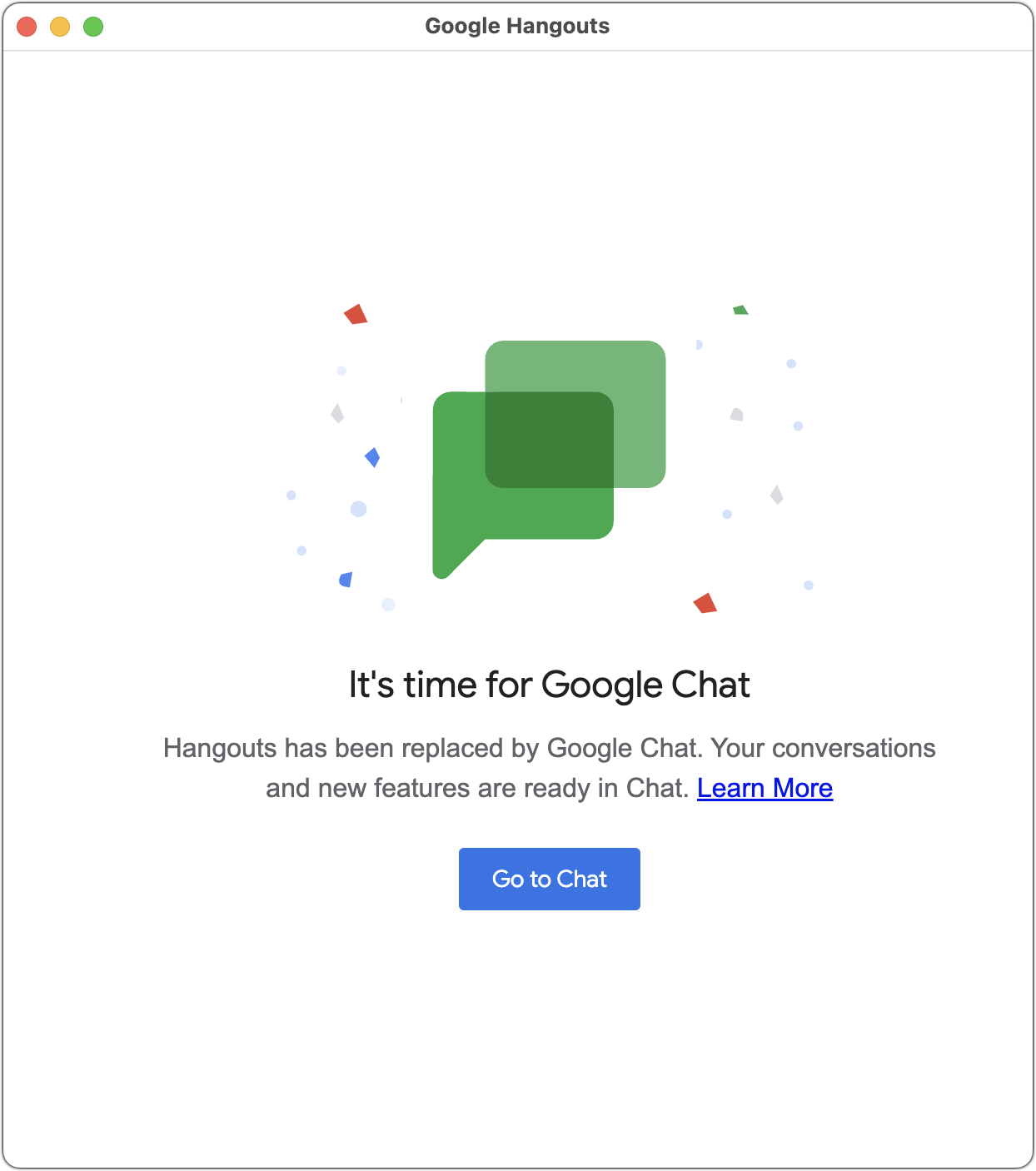 The problem is that nowhere does Google say how to stop getting this migration dialog. Complicating the issue is that Hangouts is from Google, so it could be something special and may have migrated to Brave when I switched from Chrome years ago.

Because Google Hangouts puts an icon in my menu bar, my first guess was that it was a Progressive Web Application so it could provide additional local functionality. Since I know little about PWAs, I went spelunking through my drive and found a Brave Browser Apps folder and a Chrome Apps folder in my Home folder’s Applications folder. Unfortunately, although there was a “Hangouts call” app in the Chrome Apps folder, the Brave Browser Apps folder contained only an Authy app. So, even though I didn’t fully understand what the “Hangouts call” app could be in the context of Chrome, I could tell it wasn’t associated with Brave.

After some fruitless searches hampered by the need to use generic keywords, I found a page about installing the Google Chat standalone app. It gave me a link to another Google support page about Progressive Web Applications, which in turn revealed that typing chrome://apps (which redirects to brave://apps in Brave) in the address bar would show the installed PWA apps. Alas, it showed that the only PWA I had installed was Google Drive, making me even more confused about the Authy app in ~/Applications/Brave Browser Apps. (And no, the “Hangouts call” app didn’t show up when I loaded that page in Chrome either. Whatever.)

Additional searches failed to turn up any useful information about how to prevent this migration dialog from appearing, but on a hunch, I chose Window > Extension in Brave to see what Chrome extensions I had installed. I knew a Google Hangouts extension wasn’t showing in my Brave toolbar, but it wasn’t unthinkable that I had the extension installed and active but not pinned to the toolbar. That was indeed the case, and once I removed the Google Hangouts extension, a quick relaunch of Brave confirmed that the dialog was finally retired.

So if you find yourself in this situation, remove the Google Hangouts extension from Chrome, Brave, Microsoft Edge, or whatever Chromium-based browser you use.

I’m a little annoyed with myself for how long it took me to solve this problem, but it’s a classic example of developers failing to put themselves in their users’ shoes. It was entirely reasonable to present the migration dialog to ensure that users are aware of the switch to Google Chat, but either the dialog or Google’s Learn about the switch from Google Hangouts to Google Chat page should have mentioned removing the Google Hangouts extension. I’ve left feedback about the omission on that page; we’ll see if Google improves it by adding those details.

Comments About How to Eliminate the Google Hangouts Migration Dialog