Bombich Software has released Carbon Copy Cloner 4.0, a major update to the popular backup utility that comes just in time for the imminent release of OS X 10.10 Yosemite. Sporting a redesigned interface and architecture, Carbon Copy Cloner (CCC) adds many user-requested features, including a consolidated window that brings together task configuration and scheduled tasks, easier configuration of backup tasks, a menu bar application for quick access to task information, the capability to chain tasks together for more complex backup routines, and more control over when and how scheduled tasks run. 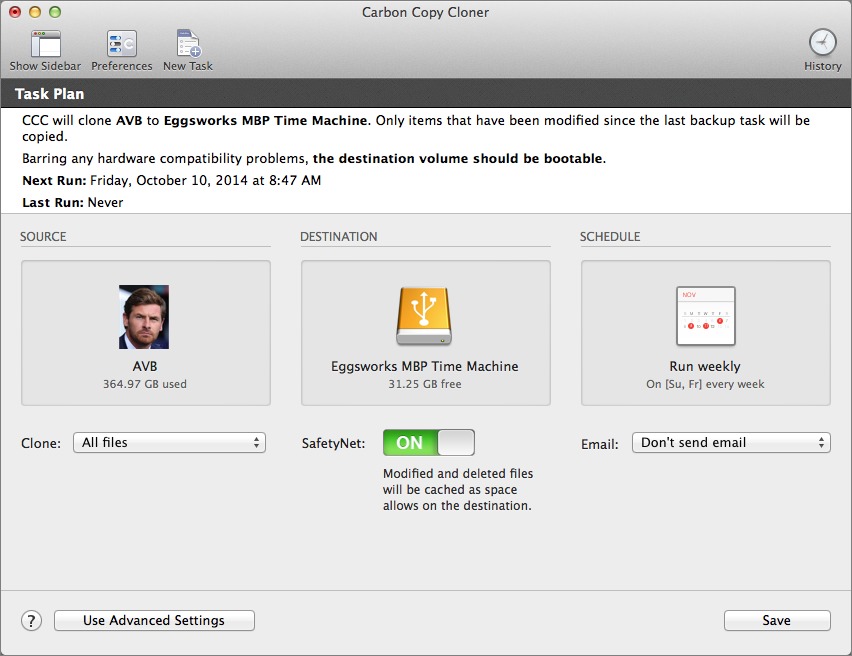 At this time, CCC 4 offers “provisional” support for Yosemite (as noted on this blog post), but a fully qualified update to CCC 4 will be released on or before Yosemite arrives in the App Store, with adjustments for a handful of cosmetic issues. Carbon Copy Cloner 4 now requires 10.8 Mountain Lion or later, but Bombich Software will continue to support 10.6 Snow Leopard and 10.7 Lion users with CCC 3.5.7 (for more on the move to CCC 4, see
this blog post). Carbon Copy Cloner 4 is priced at $39.99, and registered users of version 3.5 and later can upgrade at a 50 percent discount. If you purchased a CCC 3.5 license on or after 2 June 2014, you are eligible for a free upgrade. ($39.99 new, $19.99 upgrade from version 3.5.x, 11.0 MB, release notes, 10.8+)