DEVONtechnologies has released the first public beta of DEVONthink 3 with hundreds of new features and improvements and changes to the lineup of DEVONthink editions. Most noticeably, the information management software now sports a single-window interface (with support for Dark mode) with a sidebar for quick access to databases, favorites, smart groups, smart rules, filters, and a new reading list. 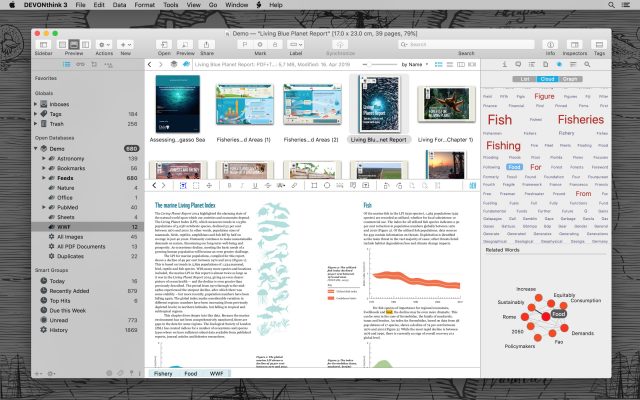 The redesigned Sorter (available as a menu bar extension or a tab docked to the side of the screen) makes it easier to capture text, audio, voice notes, screenshots, and Web clippings. The release also improves indexing of PDF and RTF attachments, brings enhanced search language that allows prefixes for mouse-less specific searching, and extends automation options with smart rules that perform actions based on events and search queries. (For a more complete rundown of the top new additions, see DEVONtechnologies’ New in DEVONthink 3 and Editions pages.)

The DEVONthink 3.0 public beta is free to use, but a valid license key will be required after the public beta phase has ended (as well as for accessing email archiving and text recognition capabilities beyond the trial limits). The standard version of DEVONthink 3  costs $99, with DEVONthink Pro 3 priced at $149 and DEVONthink Server 3 at $499. Upgrade discounts are available for those with previous licenses purchased either directly from DEVONtechnologies or via third-party promotions. (see this Upgrade page for more details).

DEVONtechnologies has updated the DEVONthink 3 licensing model with the concept of seats, with each license including two seats, such as for use on an office-based Mac and another for a mobile Mac laptop. You can purchase additional seats to add more collaborators for $49 per seat for the standard edition, or $99 for the Pro and Server editions. The DEVONthink 3 public beta is not available in the Mac App Store, but it will appear there once the final version is released and additional sandboxing work is completed. ($99 new for DEVONthink, $149 for DEVONthink Pro, and $499 for DEVONthink Server with a 15% discount for TidBITS members; upgrade pricing available; 88.1 MB; macOS 10.11+)