The last few Macworld Expos in San Francisco may have shown a rebound from the doldrums of the previous years, but that was in large part due to the number of vendors showing iPod-related products and to Apple releasing exciting new hardware and software. In short, the Macintosh industry, not including Apple or iPod-related products, hasn’t made strong showings at Macworld Expo for quite some time.

Thus there was some cause for concern when Steve Jobs led off the show with a keynote address that, rather than setting the tone for the rest of the week, served as notice that Apple Computer, Inc. was de-emphasizing its computer roots by becoming Apple, Inc. and announcing the Apple TV media center and the truly amazing iPhone. Jobs not only didn’t announce any new Macintosh hardware or software, he didn’t so much as say the words “Leopard,” “iLife,” or “iWork.”

(My analysis of the lack of the iLife and iWork suites is that both probably rely heavily on Leopard-specific technologies, such that even if they function in a more-limited way in Tiger, Apple won’t be releasing them until Leopard is out. Several Keynote transitions that appeared in Jobs’s keynote may have required the CoreAnimation technology in Leopard, indicating that Jobs was relying on the latest and greatest, even if it’s not ready for the unwashed masses. As to when we can expect Leopard, and potentially updates to iLife and iWork as well, I’m guessing late April or early May of 2007.)

As a result, the Apple booth, though it had decent traffic, wasn’t the mob scene it has been in previous years. Sure, it was hard to see the two iPhone models on display in their clear lucite columns and watched over by security guards, but I never had trouble walking through the Apple booth, as I have at other shows.

As for the vendors of iPod products, they were certainly out in force again, but it felt as though they were a smaller proportion of the 356 total exhibitors (down ever so slightly from last year’s 361 vendors, but covering much more space). A friend has run a contest on a private mailing list to guess the number of iPod case vendors at Macworld SF the last few years, and there were 45 such booths this year, down from 49 last year.

Despite the lack of new Mac-related products from Apple and as much iPod emphasis from exhibitors, this was by far the strongest Macworld Expo I’ve attended in many years, thanks to the leadership of new IDG World Expo vice-president Paul Kent. To jog my memory, I read our Macworld Expo coverage back through 1998, and it was instructive to see how I was attempting to put a brave face on some of the rougher shows, and how the resurgence from those shows was due mostly to Apple and to iPod vendors. Along with plenty of vendors I’ve known for years, there were booths from companies I’d never heard of before. Attendance was very good – reportedly up more than 30 percent on pre-registrations alone (we won’t know final attendance figures for some time yet). Crowds in the South Hall, where the larger companies were located, made walking slow at pretty much all times, and although the North Hall was never as full, I talked with a number of people who never even realized there were more vendors in the North Hall, which wasn’t used in 2006 or 2005 (and shouldn’t have been used in 2004).

Other aspects of the show were also well handled, with the only shadow being IDG World Expo’s low estimate of attendee numbers in sessions the first few days, which led to some people being turned away and sessions being repeated. Seating was reconfigured at some point to eliminate the tables that had reduced the number of available seats in each room. Most notable was the the swag bag given to speakers – it was a huge piece of rolling luggage stuffed to the gills with software, iPod cases, speakers, and more. Rewarding speakers, who in previous years received only a shirt or jacket with a Macworld Expo logo for their efforts, in this way was pure brilliance, since it makes industry experts much more positive about the effort necessary to prepare and present a talk, and it enables many companies to get their products in front of some of the most influential people in the Mac world. As full as the bag was, there was a rumor circulating that twice as many companies had wanted to include their products, with half being turned away for lack of space. 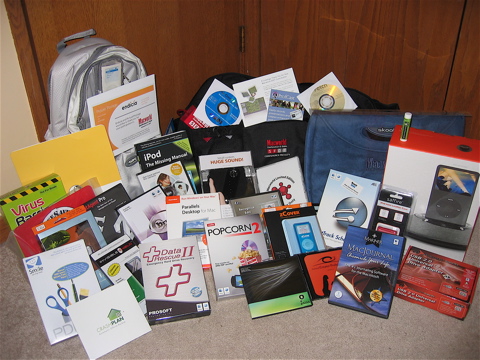 My only regret was that there wasn’t another day in the show schedule, since I didn’t get to spend as much time as I would have liked on the show floor, and had to rush past some booths where I could have happily watched a demo or grilled a company representative for product details.

Much of my lack of time was due to all the panels, presentations, and interviews I had scheduled. Apart from my appearance at the MacTech booth, which was unfortunately stuffed in the far back corner of North Hall, to discuss and sign the new TidBITS Archive CD, my other presentations and panel discussions were standing room only, and often not even that. Many of the panels were with other Mac luminaries who have become ever more friendly over the years, which turned previously dry panels into spirited exchanges that bordered on improvisational theater, all while revolving around the events and announcements of the week. We’ll be posting links to appearances that were recorded as they become available, and I strongly encourage you to give them a listen.

Perhaps some of the enjoyment of this year’s show, from the keynote to the MacBrainiac Challenge (my team lost on the final, fuzzily worded question) to the Netters Dinner, was that we had no middle-of-the-year Macworld Boston, nor a MacHack/ADHOC conference, thus focusing everything onto this show. (If you want to try your hand at the MacBrainiac Challenge, Chris Breen has posted all of the questions online, and will be adding the answers later in the week.)

For many people in the Macintosh community, these expos are an essential time for in-person networking and reconnecting with friends. We met John Moltz of the Crazy Apple Rumors Site for the first time (and it was his first time at a Macworld Expo), and also got a chance to spend some time with Dan Pourhadi, from whom we hope you’ll be reading more in upcoming issues. And I can’t count the number of times someone would come up to me and say, “You don’t know me, but I’ve been reading TidBITS for