Until recently, I haven’t been a regular visitor to Apple’s Mac OS X Downloads page, but after coming across their latest featured download, I may make a point of checking more often. The program in question was a nifty iTunes plug-in called iConcertCal, which generates a personalized calendar of concert dates based on artists in your iTunes music library and your location.

After installing the plug-in and (re-)launching iTunes, iConcertCal appears as an alternative to the normal iTunes visualizer. Choose View > Visualizer > iConcertCal, and then activate the Visualizer by choosing View > Turn on Visualizer (or press Command-T). Enter your city, state (or country for those outside the United States), and a radius (in miles) from that city (it’s not inherently obvious that you can type in those fields, but you can).

Once it knows your location, iConcertCal generates – within the iTunes window itself – an iCal-like calendar of concerts in venues within the area. What’s truly neat is that it displays only concerts from artists already in your iTunes library. The calendar is generated by feeds from live music sites such as JamBase and is updated weekly. Clicking a concert link in the side list of upcoming shows or in the calendar itself takes you to the show’s entry on JamBase. Pressing Command-T returns iTunes back to the normal view. 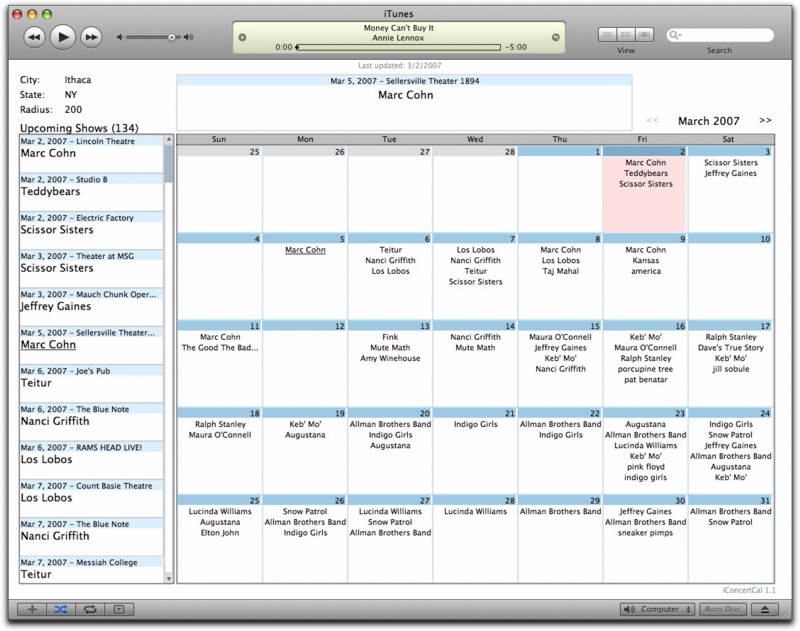 If you’re interested in concerts by artists whose music you don’t already own, you can tell iConcertCal to expand its search by putting those missing artists’ names in a text file called “iConcertCalOtherBands.txt” in ~/Library/iTunes/iConcertCal (one artist per line). It’s more likely that you’ll have songs from artists who you’d never want to see live (imagine the free weekly downloads from the iTunes Music Store; you might like a song well enough to keep it, but not well enough to attend a concert by that artist). To restrict iConcertCal’s searches, create a playlist – it can even be a smart playlist – called “iConcertCal” that contains just those artists you want to see.

iConcertCal is only as good as its data source, which sometimes disappoints. It failed to report a scheduled concert I’m keen on attending – The National at London’s Astoria on 22-May-07, which is by no means a low-profile show. However, you can join JamBase and add both artists and shows and, if accepted, they will show up next time your (and everyone else’s) calendar is updated for that location. Then you will have the pleasure of making an already cool thing even cooler for everyone.

[While editing Glen’s article, I decided to see if adding an artist to JamBase was onerous, and I’m pleased to say that it wasn’t. So hopefully JamBase will start reporting shows by my current favorite jazz group, the New York City-based Dave’s True Story. -Adam]

iConcertCal is a universal binary requiring Mac OS X 10.3 or later in conjunction with the (encouraged) latest version of iTunes. There is also a Windows version. You can download the 340K installer from Mac OS X Downloads or the product’s own page. It is freeware, but you can make PayPal donations on the iConcertCal site. I’ve already done so!

[Glen McAllister is a licensed busker on the London Underground and freelance IT consultant.]